All Airports shown as having "No Published Instrument Procedures"

Brief description of the issue:
In the World Map, according to the legend, a green airport symbol signifies “Approach Procedure and Radar Minimums” (what are radar minimums? Does that mean approach minimum altitudes specified in the Approach procedure?), and brown signifies “No Published Instrument Procedures”. All airports are now represented with a brown symbol even when they have published procedures

Provide Screenshot(s)/video(s) of the issue encountered:
Clearly KPHL and McGuire AFB have published procedures, but not according to the World Map. This is repeated everywhere. 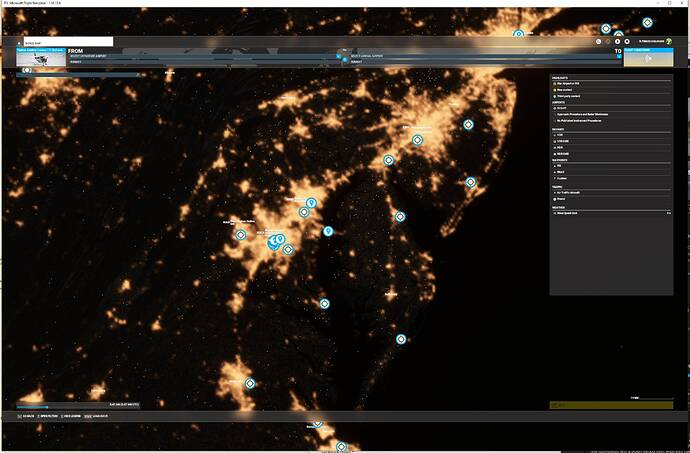 Detail steps to reproduce the issue encountered:
Start the game, go to the World Map. All airports have a brown symbol.

Same here, I can probably resolve it loading up Navigraph but wanted to try Vanilla MSFS, sadly nothing, the A320 shows a database in the FMC, old one, but no procedures.

I’m pretty sure this is a systemic issue. The airports actually do still have their instrument procedures, it’s the World map that’s broken (not to mention they hid the important menu choices at the bottom and you have to hit “more” to see them, but that’s a different subject). Somebody in the other thread that got all confused as to its subject said they are using Navigraph and it still shows the same thing.

Just loaded up Navigraph data and now I have world map procedures.

So the airport symbols are green?

I did a plain vanilla IFR flight, and all the airport instrument procedures were available to me in stock MSFS. But the airport symbols were all brown, which is what this bug report is about. I didn’t try to choose a procedure in the World Map, however, that would be, in my estimation, maybe a separate bug? Maybe not.

As a side note, I never choose an approach or departure procedure when creating a flight plan, I expect ATC to give me the appropriate procedure when I leave and when I get to the airport. But that is neither here, nor there (pun intended).

No idea sorry, I have just about given up so much not working for me in IFR, back to XP for that and VFR for MSFS. I had no procedures in the A320 Vanilla using the FMC.

Not intending firing it up for a while now

What ever happened to that Zendesk ticket if I may ask? I’m having the same problem, its just a cosmetic bug as far as I can tell but its annoying.

Who knows what happens to tickets?

Somebody reads them on Asobo’s side, and then Zendesk marks them as solved. One of the worst customer interfaces I’ve ever seen.