When FS2020 was released I started to jot down what I wanted to see, do, achieve etc. and one was to recreate Amy Johnson’s flight, and in doing so maybe learn a bit about how to navigate (I’ve been flying sims since the Spectrum 48k but never really learnt anything more than how to wiggle me joystick, fnarr).
Starting with the basic description of her 20 day endeavour, which included some of her diary detailing the odd problem encountered, I’ve used LittleNavMap to plan this route so far (see below), but apart from the wiggly bit along the Euphrates I feel it’s still in need of a bit of refinement. Not all airfields exist(Croydon for starters*), and not every stop was in fact an airfield, and many have had name changes over the years, but I think I’ve got 80% of it (though the other 20% will no doubt take more time)
I’d be interested in any feedback (especially if it turns out someone has done any of the hard work already!); also, I’d like to keep it ‘steam-driven’ so any thoughts on a plane from the standard edition of FS2020, or freebie 3rd party that might have similar characteristics? It needn’t be a biplane (and the Pitts is fun but too twitchy for long flights and has poor visibility) - I’m favouring a Cub, or one of the interesting variants, or a 152. 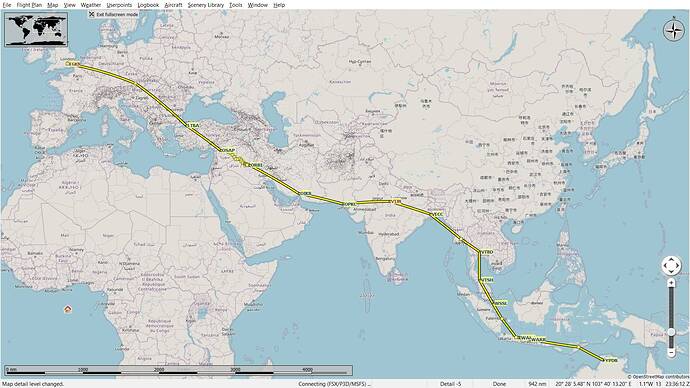 MSFS 2020 combined with a little history to create something bigger than both. Fantastic!
Sadly I have nothing to bring to your project beyond my admiration and encouragement.
But I hope the sim does your project justice.

Flight finished about a year ago now. Did it in a Savage Carbon for the visibility but had to cheat regarding the fuel. I didn’t use LNM as a cheat (I turned off the plane tracking feature) but used it purely as a map to regularly re-calculate my course from visual clues (roads/rivers/lakes/hills) and flew as ‘pure VFR’ as I think I could - I will admit that modern mapping, together with a compass/watch, must be such an advantage over what historic flyers would have had. I restarted the clock each ‘morning’ and tried to keep live weather on though had to temporarily give in when I crossed India (majorly wet!).
Amazing scenery, especially going down the Persian Gulf - I was also amused/amazed to peer down at a racetrack in Germany and recognised it as the Nordshliefe - great detail in the stock scenery (and I guess this was before the update). I’ve attached the LittleNavMap flightplan - it’s not pretty but it might be of interest to someone else someday and it has some relevant notes.
VFR Kenley Aerodrome (EGKN) to Kingsford Smith Intl (YSSY).lnmpln (29.2 KB)