Around the world tour

I’m currently 20 stops and arou d 35-40HRS in using 70% TBM, 20% Cessena 208b which absolutly love the cessena btw ! but the other 10% i throw a a320 in which ive used twice, but my question is am i doing my self out of the sense of achievement when ive finished to know that ive completed a world tour mainly using a little cessena with the occasional TBM for over sea’s ?

I know everyone will say do what males you happy but honestly flying a magic carpet would make me happy lol, i just love flying anything on msfs2020 to be fair lol, so in your opinions would you in my position do what i have done already or you you sack of the airliners and stick to me little baby 208b and the TBM for long over sea runs ?

i only start this couple of weeks ago to see hpw it goes and got to say i am loving it and im seriously hooked, its the best thing ive choosen to do

Don’t do the airliner, fly one of the other planes which you enjoy flying.

Thanks ! that’s what i was thinking…i think " oh i’ll just sling me self into an A320 to change things up " then when get there look back and think mannnn i missed loads there if id have low flown by cessena, i think thats what i’m going to do,stick to lottle planes.

where are you starting and planning to finish your tour ?

I’m doing a world tour where I’m landing at every country’s capital (some fly overs like Vatican and Monaco). I mix my planes as I pair it with (previously) OnAir and now NeoFly. So depends on the job I get which then makes me decide on the plane to fly - was predominately Caravan, now nainky Kodiak with the occasional DC6 . Mainly VFR but have used the A320NX on some ‘boring’ legs. All that desert in Saudi

I’m doing a tour in the G36 (Improvement Mod) and completing it in 2hr ish legs. I started from the Beech Factory and slowly working my way south. My plan is to complete it in one aircraft as a kinda very loose role play.

You’d be surprised how far you can go in a smaller aircraft and you could always ‘simulate’ carrying additional ferry tanks.

My personal opinion is leave out the heavy iron and take it down low to enjoy everything the world has to offer! As a certain Frenchman said ‘The world is big’

Might as well enjoy it and take it all in. 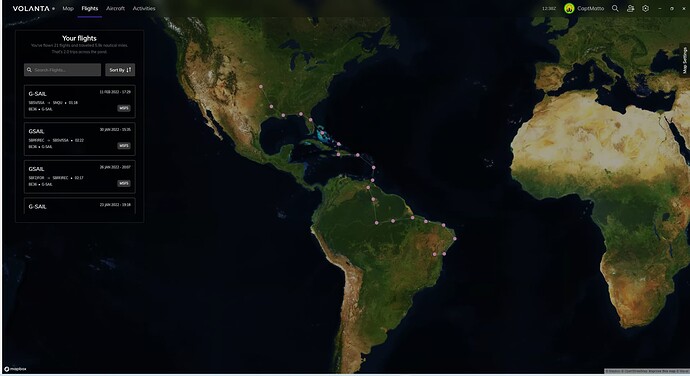 love how you have it tracked on a map like you do, i habe it excel’d but now graphical map to plot my runs…thats excatly what im going to be doing the weekend

, but yeah thanks the more and more i think of it low flying with smaller planes is just way better and you are absolutly right with how far you can go with little planes its the one thing that shocked me…how far you can take them little babys, i aint got any screenshots on my phone its on computer back home and im at work so ill throw some up when i get chance but i started mine in Ushuaia ( argentina ) and the weather was low, extremley dark clouds, heavy rain and very very windy ! it was only a 40mins flight to first stop but AP werent working on that run for some unkown reason

and it was hellish to keep that TBM straight…lol start of a very good world tour so far, its a great airport to depart from if heading nprth because your face with very high moutains all around you

I did it in the TBM only:

ROUND THE WORLD TRIP - COMPLETE NOW! MY FINAL THOUGHTS Hi all. Well, it is finally complete. My round the world trip - sort of VFR/IFR and pretty random flying to be honest - has finally come to an end. Below you’ll find the complete saga, captured as I went along, screenshot after screenshot, random bit of blurb after random bit of blurb. What started out as a “let’s see how this goes” turned into something of a marathon. I started out on 20th August 2020 from my home town of Edinburgh, and…

I would suggest using a third-party addon like LittleNavMap, maybe something similar if that exists.
Circumnavigating the globe is really fun to fly, as long as you know your aircraft limitations and find the routes and the weather you can take with it.
Depending on the season, it’s also nice to check if you go south or north route.

You certainly can do that with a TBM, flying either the north or the south route. It takes you a bit of research to find airports capable of refueling your aircraft.
Obviously the more capable the aircraft, the more distance you cover between stop points, and the less refueling stops you need… but what is the fun in 3 steps with a 787.

In previous iterations of this sim, you can do that with a DA62. Not too sure this applies with the present version of FS. But then, the TBM does the job for the most difficult route, the south one.

Really you don’t need to go east then west again, you can do the whole trip.

, thats the one thing i love, some of the screenshots ive taken are beautiful ! also landing in obscure airport that you spend ten mins trying to see in the distance just to realise its that TINY strip of gravel next to the shed

finding airports to refuel your aircraft ? hold on am i doing it completley wrong…im starting the sim up, picking an airport to fly too creat a little route then land quit, back to main menu and repeat from the airport i just landed at.
should i just use one save and use third party ( just subscribed to Navigraph ) to find airports and just refuel and go ? i never thought of doing it this way

My advice would be, just do what you do now, even if airports / airstrips don’t have refueling capabilities. There is a refueling option in the sim regardless.

If you want to add more realism to it, yes you can check those capabilities as well. But by any means would I advise to save, quit and reload when ready to go. I’m not too fond of the save grand scheme in FS right now

The main idea of my post is, either through the Ascension / St Helena route in the south Atlantic or Greenland / Iceland route in north Atlantic, a lawn-mower could do it, if you can strech strings a bit (that’s the weather).
The same goes for the Pacific ocean, there are but a few routes you can take, they require some research at the time you do the flying.

And when you do that, it’s really something you’re proud of, probably becaue you made something you didn’t think you would. No achievement there, at least none I’m aware of.

Edit: My apologies OP, I thought I replied to your comment, I just replied to the thread.

got me thinking now…does anyone know if you can input a flight path into a CESSENA 208B or while im loaded into plane at the airport if you can load a created flight path from Navigraph into plane, i know how to load plans from naigraph into msfs2020 and load from menu but if there is a way to create one on Navigraph and inport it into plane while im on airport that would be brilliant !

I suppose it is cheating, but my tour involves just the Cessena 172 and GTFP (a flight planner I wrote). The latter lets me “slew” across the oceans without leaving the cockpit. 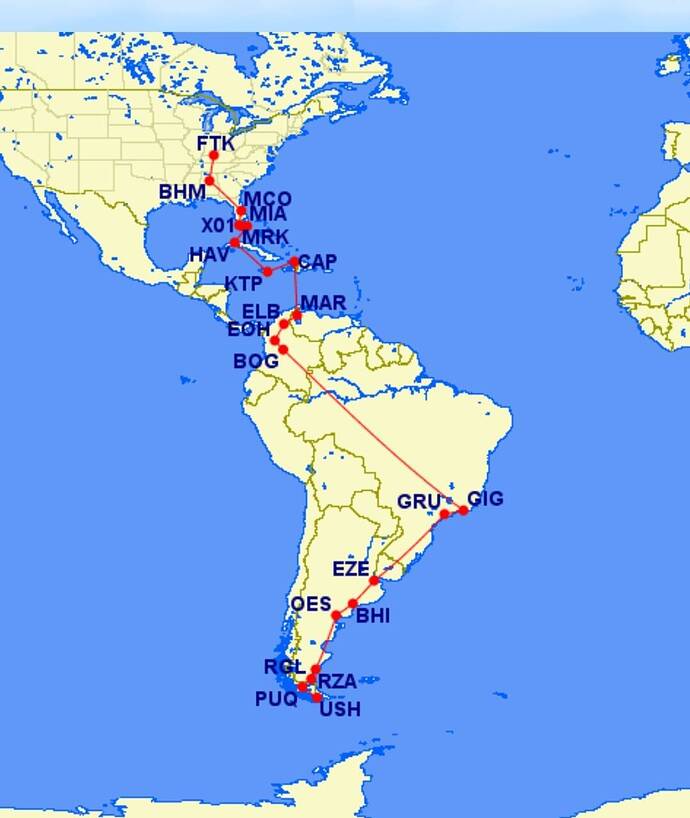 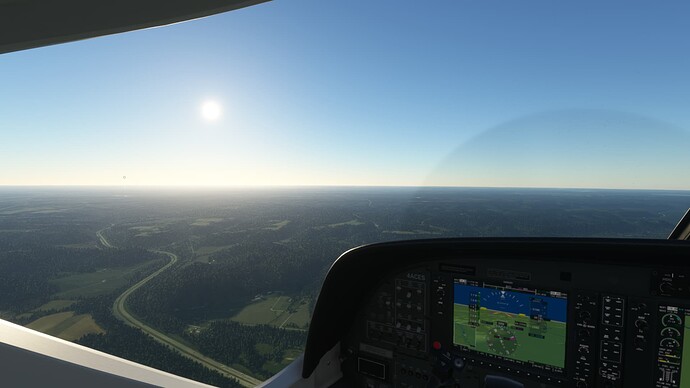 pretty much. When you finish you can have the luxury of saying “yeah i flew around the world. What of it?”

I’m trying to follow the route that was flown during the first circumnavigation of the world in 1924. I didn’t find some airfields (maybe they don’t exist anymore) so I only roughly followed the route. my route sections are also significantly shorter.The picture shows my progress so far. however, i didn’t document the first stages to japan that accurately. Mostly with the C172 Skyhawk.

That sounds like fun, should be a scenic route. There are no rules! Fly whatever you feel like. Just imagine you are a ferry pilot. In real life multi-qualified pilot ferry different planes all the time!

I agree with everyone else that I wouldn’t use an airliner during the tour. Many real world airline pilots have a PPL and fly small planes because airline flying just isn’t the same. In an airliner, almost none of the challenges of a circumnavigation really matter (fuel range, weather, navigation…)

Personally I’m taking it a step further : I think the real circumnavigation is when you hand-fly without autopilot. Otherwise you can just switch it on and leave for 4 hours until it’s time to land. It’s a great screensaver but the actual flying is no more than 20 minutes at start and landing. (In the real world it would be more work due to having to radio between ATC sectors, for flight plans or planning for border crossing, but not all of that is simulated in the sim.)

I’m currently flying around the Mediterranean in a Diamond DV20. No AP, no GPS. (I cheat and look at the VFR map sometimes to learn and improve my navigation skills like I would look at my phone from time to time of it was a RL flight.) Although it’s a bit lengthy at times, it gives me a sense of accomplishment to have navigated with map and compass only and having hand flown every bit of it. Also helps me to get to know the world better.

I fully agree with you. but to see the landscapes that you might not otherwise have flown over (e.g. Aleutian Islands, Kamchatka) is cool. of course it has something of an elaborate screensaver.