Do you have any add-ons in your Community folder? If yes, please remove and retest before posting.
removed, only installed the updated a320nx
Are you using Developer Mode or made changes in it?
no
Brief description of the issue:
ATC keeps repeating taxi, approach and landing phrases
Provide Screenshot(s)/video(s) of the issue encountered:
Cannot make a screenshot of talking ATC.
Detail steps to reproduce the issue encountered:

Every flight after the update has problems for me. Flying in eastern USA keeps eating fps.
But in Europe ATC keeps repeating everything even after talking back to them. In the screenshot i attempt to land at Brussels. On top of the irritating ATC i cannot see the ILS while i activated it. 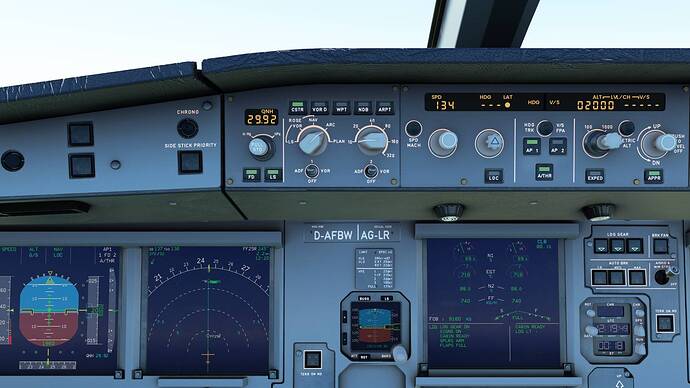 Didn’t send it to zenddesk yet, because wondering if other people have the same experience

Provide Screenshot(s)/video(s) of the issue encountered:
Cannot make a screenshot of talking ATC.

Yes you can, open the ATC window for the log (default hotkey is scroll lock), or enable subtitles.

Yeah i know that, but whats the point of making a screenshot of a subtitle thats repeated 5 times in 2 minutes…

It would verify in an image what you are saying. The only time I have had this is I think related to a bug in ATC for certain airports.

For example, I land, and you get the typical exit runway responses. You exit, then you get the message handing you over to ground. But in the ATC dialogue the only option is “Say again”. You cannot acknowledge. You then get asked again, and again, and eventually they terminate ATC services. This conversation shows in the log file you haven’t posted.

I am then able to call ground, and request taxi to parking. I’ve only seen this perhaps 3-4 times.

I’ve restarted the sim and are in a flight from Heathrow to Roma, Ciampino airport so in about 1.5hrs i’ll know if it still occurs. Then i will make a ss of the log
I had it yesterday as well.
Just a repeating ATC for approach and landing. Even when i was already on the ground i got the message clear to land…and yes, i responded to that message. 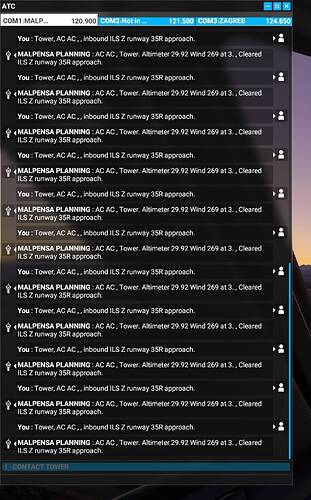 I had this today, and suspect it may be airport specific. I got it Dillon (KDLN).

It has two frequencies:

If you tune to automated weather it endlessly repeats. If you switch to CTAF, the weather readout doesn’t stop.

If you managed to get a word in edgeways by holding down a key to announce your position, then it will repeat that instead.

I tested at M37, and that strip did not have the issue. 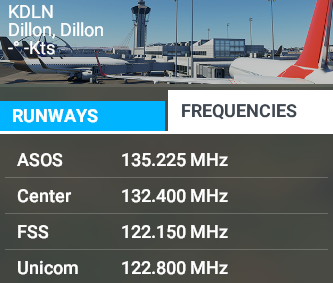 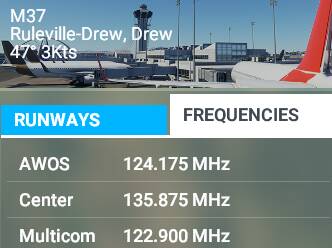 I wonder if it is specific to those that have “Automated weather” in ATC menu, rather than ATIS for example?

I’m going to try to find an airport with the same services available to see if there is any correlation.

The only two frequencies I could see in the ATC window were Unicom, and ASOS.

Just tested KALW, which also has ASOS, but it does not have the issue. It is towered though, but that may be irrelevant.

I wonder if its related to this:

3U3 has the same frequency for AWOS, as well as CTAF. This causes the repeating as you only have a single choice. Choosing Traffic breaks Azure TTS, and you get AWOS with local TTS:

KBTM has exactly the same services as KDLN but does not have this issue.

It would appear this is airport specific.

Same problem for me. It occurs on all aircraft and all airports. Started 1 month ago. I just stopped using atc altogether.