Hi to all you experts out there.

When using the in-game ATC and I go to request taxi there are several options (straight out, north depart. south, east and west.) Is which one I choose dependant on my flight direction? What’s the criteria?

Also, sometimes ATC gives me a different runway and direction than I planned. Do I just ignore them and go about my business as if they gave me the runway I planned on using?

Still getting used to (mostly confused) all the intricacies this sim has to offer.

Thanks for any help.

Sometimes you can choose a different runway before confirming the taxi. When you can choose the direction you probably don’t have some form of flightplan filed, or you’re on a VFR flight

It’s the direction of your flight basically. At some airports the procedures to go north aren’t exactly going straight there due to terrain or other restrictions. Normally you’d announce a north departure via a procedure there. Since the sim doesn’t offer that option you simply announce a straight out north since it’s the best “wrong” option. The runway has nothing to do with it. That is depending on the wind only. Only the procedure could differ but as I said, for vfr the sim doesn’t care about that. In normal case without procedures you’d remain in circuit and announce your straight out mid air when ready.

If they give you a wrong runway (not into the wind), they don’t seem to know, in most cases, what runway you are at, so often you can still request a takeoff clearance from a runway they didn’t assign.
Other than that, you have to ignore them if you want to use the correct runway.

The only option for change is a parallel runway (if there is one) if you filed a flight plan.

As mentioned, if you are intending on flying to the west, that is what you would ask for.

Thanks for the replies guys.
It’s just annoying sometimes when I have a SimBrief plan, checked everything with Navigraph, got the correct SID loaded into the MCDU and they send me to a different runway heading in the opposite direction.
As I’m really new to this I don’t have any other traffic on and the weather is set to clear skies and no wind.
For the time being I’ll just keep ignoring them.

Do you actually mean departure or approach? If you mean approach the solution is simple.

Don’t use pre-flight map for flight planning, use the cockpit. Then you leave arrival PROC blank until you’re given the advice for approach. If you don’t like the approach you answer back “Please Stand by/Select different approach/Send request to the operator” (Can’t do when you used the pre flight map for IFR flight planning. In my experience it always messes something up then)

but it sounds more complex than it really is.

I just use the runway I want.
They can’t suspend my license.

You will still get Atc for the rest of your flight.

I’m a bit confused, this departure to the north, east, south, west should only be an option when flying VFR, yet you are speaking of SIDs during a later post. Regarding the VFR departure directions, in Europe there usually are pre-defined VFR departure and arrival routes to fly. They are named after the last waypoint (for departures) or first waypoint (for arrivals). In the example below “Uniform departure” and “Romeo arrival”. As this is probably too complex for MSFS to work out its simply direction for departure instead of requesting a particular departure or arrival route. 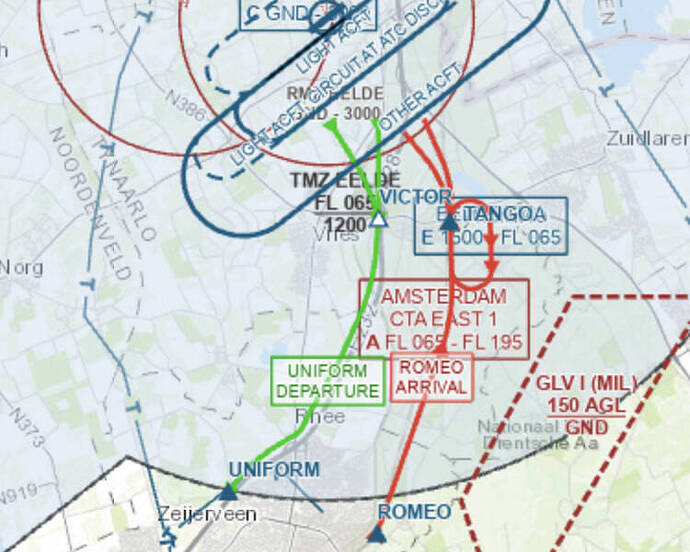 Even at small uncontrolled aerodromes (without ATC) I don’t recall having to announce the direction for departure. We used to announce the destination on initial contact and of course announce lining-up for departure and “leaving the circuit”. For arrival we did announce position but that can be anything, direction and distance or time, geographical position, e.g. overhead some village, etc.

The MSFS ATC is not very accurate in that regard. They did adjust it to more closely resemble FAA phraseology. On this side if the pond the phraseology is very unrealistic. I did write a Mod to make it closer to standard ICAO phraseology. But there are quite some limitations in what you can do.