Unbelievable that this topic is marked as solved and only has 16 votes ?!?!

This topic is not solved and it needs a million votes!

I’ve used it quite often but it’s just so screwed up in so many ways,

No wonder nothing gets done around here. Too many just accept flaws, and countless workarounds are good enough!

This msfs is bound to remain an early alpha.

It is a matter of ASOBO computerspeak terminology.
Solved in that speak doesn’t mean solved in the terms others would think.
Here is a quote from the Zendesk faq.

This ATC should issue instructions in conjunction with published procedures.

My suggestion was only for the enroute phase of flight where ATC will play jojo with you in the described scenarios.

Can you describe a specific scenario where this might help reduce yoyoing?

Thoaght I already did…twice.
In the enroute phase you can file a flight plan that while keeping you clear of cumulus granite may be too low for a IFR route segment that it follows, too low for a sector altitude or too low for a MCA that the built in sim uses to calculate how high to keep you.
ATC will then send you higher to some “calculated altitude” for a few miles…as terrain or what ever limiting factor below you drops away it may then clear you again for a lower altitude or the one you filed.
A few minutes later the next rising terrain etc will have you send back up again.

You can avoid most of this by actually planning a route using proper IFR planning charts etc OR you can try to simply use the method I suggested. Ask for an increase to your filed altitude close to what ATC gave you and hope for the best.

Ask for an increase to your filed altitude close to what ATC gave you and hope for the best.

I still don’t see how that changes anything except perhaps you might skip a couple of peaks in elevation along the route. The other day I flew from KCIC to KACV. ATC sent me to FL160. So many miles out I was ordered to descend to FL11000. Where in this scenario should I have requested a higher flight level? As it turned out it sent me to 7000, then 8000, then 3500, then 5000 etc. Goofy. I will play around w/ the pre-flight planner and see if it is possible to follow an IFR chart perhaps. Still though, I don’t see why the sim doesn’t simply determine where you need to be relative to terrain and your locked-in IFR route and approach it seems pretty straightforward. Maybe they will adopt somthing like this.

If it is so easy to program a fully functioning ATC system that can deal with correct and incorrect flight planning, real Wx, terrain etc…why don’t you program something and sell it as an add on ??

I tried to give you one “workaround” to deal with some of the JoJo commands one can get from the canned ATC. Does it work 100% of the time ?? No it certainly doesn’t because the canned ATC has quite a few things that need fixing.

In this particular case it probably would not, and once you are cleared to leave the planned cruise altitude it usually doesn’t make sense any more to ask for something different or you don’t even get that option anymore.

The approach phase is for me the one that should be “easiest” to get better using published procedures. But by no means easy.

I have flown into Eureka a few times IRL and the terrain east of the airport qualifies as mountainous I would say and definitely rugged. The variations you saw at the end could be due to the different MSA altitudes around the airport, depending on which approach you had.

Since they bizzy with the ATC , let em look why ATC does this a lot of the time , while decending for landing i get this with lots of flights : 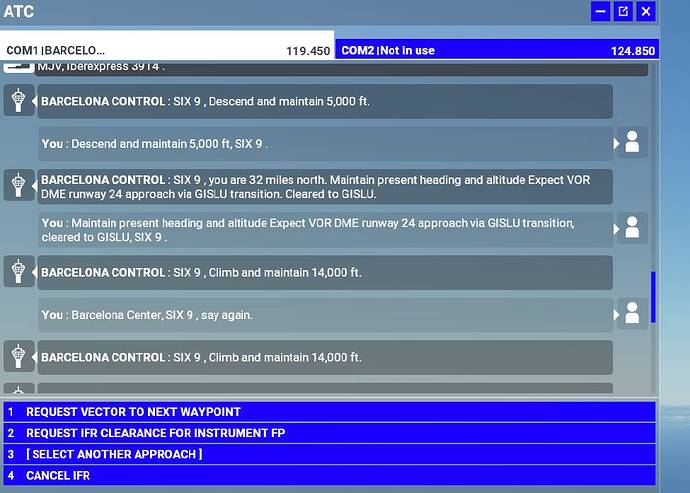 @ SteveOhhNo
Did you planned your flight with the internal flight planner in MSFS or import it out of a 3th party planner like simbrief are what ever?

msfs planner. in a DA40NG

When i plan a route manual along low altitude route segments then most of the time it go’s well. But when i let the MSFS route planner do it for me i get the strangest altitude changes from ATC.

I use Navdata Airac 2101 beta for MSFS and also on simbrief and Little Nav Map.
I plan my route in one of the two route planners and past the route data manual into the sim.

The variations you saw at the end could be due to the different MSA altitudes around the airport, depending on which approach you had.

Sure. If hte logic looked at the highest elevation point on the KNOWN route, and kept you X feet above that and of course reevaluating at intervals there should be no yoyo. Unless you’re trying to stay under radar I don’t see any reason why, for example you’re 50m out, at 15K feet, and the highest elevation point between you and final approach is 3900 feet, then you simply direct the pilot to descend to 3900 + minimum allowed clearance, or let’s say 5900’. I don’t want to be directed down to 4500 feet because I’m flying over a relative low spot. Just keep me at 5900’. This is a gross oversimplification to illustrate the concept. Instead the bloody thing it telling me to go to 8000’, then 6900’, then 9400’ etc, sometime every few seconds!

Cons of a bad Algorithm thats used by the Asobo devs.

So true! FSX ATC was great and awesome compared to anything else out there. It’s really a joke.
P3D got it okay, obviously, cause they used excactly the same ATC. But all the Addons are ■■■■ and don’t even start asking about X-Plane…