I’ve used ATC quite often but it’s just so screwed up in so many ways, especially when flying over mountainous terrain. ATC will start the descent on a 1000m flight sometimes 300m out then I find I have to request to increase altitude as mountains are coming into play.

Anyway, surely this is a project to focus on improving I sure hope, but I’ve not heard anything in terms of upcoming patches that might improve some of this. Anyone heard anything?

There are surtanly a lot of things that can be improved.
I hope that Asobo will work on that, because now it is not working well.

To get a proper ATC simulator to align with a world wide flight simulator such as MSFS could be done i guess but it is never going to happen because MSFS is simply that, a game. Yes they could improve it but your never going to see a proper ATC simulation within a game. ASOBO have had a go and it falls well short but do not expect any major fix. You want realism, vatsim etc or third party software is your only choice, it is far to complex to add to a game. Many have tried and all have failed. 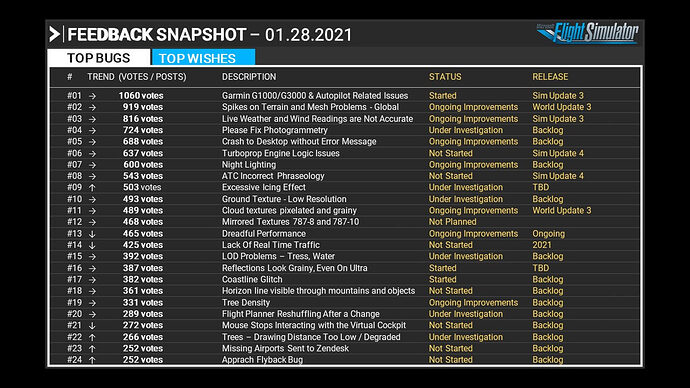 It’s really the same ATC as FSX, which was virtually the same as FS2004. So the ATC system is almost 2 decades old, yes they’ve added a few new features with MSFS 2020 but it really does need some serious work

My question is, what all is included in the “ATC Incorrect Phraseology” entry.
I have heard lots of rumours, but I haven’t seen anything definitive yet.
To me, that sort of sounds like a minor “fix”, not a serious upgrade of the ATC system.

Nope, not looking for a perfect ATC. But they can do a whole lot better than they have in certain areas. Ancient FSX ultimately works better and even sounds better, though it’s of course not perfect either. But this, “it’s a game don’t expect” certainly won’t inspire the team to improve what they started.

Thank you my friend for answering the question. Looks hopeful!

Why is ATC not using the altitudes from inside the flightplan?

I wish that was true. FSX worked perfectly for my needs. ATC is now my biggest issue with this sim

If anyone recalls Flight Sim World from Dovetail, it had pretty limited ATC but the quality of implemented aspects of the ATC was much higher than corresponding aspects in the MSFS. Whoever programmed ATC in FSW was really passionate about it and was doing great job.

When the ATC of MSFS2020 use a little bit better Phraseology and when it use the altitute parameters of the flightplan then it was a much better ATC.
Off course there shall be much more things to wish for, but for now it will help when Asobe make the suggested changes.

Yes the ATC in FSX was good for that sim, it feels too simplistic for MSFS2020 and it has a few bugs that it didn’t in FSX.

If ATC is important to you then I would go third party of fly one one of the virtual airspace’s with human controllers.

I use Pilot2ATC. It as voice and menu driven ATC, Flight planning with SID, STAR, and Approaches, multiple moving map options (including US VFR and IFR sectionals), Navigraph integration, plus other features.

Exactly! And how difficult it would be to fix at least that?

Like it or not it is a “game” not a simulator. Do not get me wrong, MSFS has its place but having flown real aircraft in the Air Force and used there simulators, then controlled real aircraft in the civilian world you do not need to “inspire” anyone to fix anything. Simple economics will decide how good the
ATC system in this game gets to be funded by how much of the pie they can grab from copies sold.

The constant ‘descend to X altitude’ only to be contradicted sometimes every few seconds up and down a few 100 or 1000 feet.

Not to defend MSFS ATC, because there certainly are quite a few things that need fixing, but in the scenario you describe it often helps to ask for a higher clearance if you are still some distance from your destination and the aircraft can go up 2000ft or so.

ATC will accept a planned altitude that does not work with the built in MCA … so it bounces you up an down all the time.

Sounds great I apparently missed this option. How do you request higher clearance?

Even so, if you’re flying a known departure or approach (chosen via the procedures interface) the sim knows exactly where you’re supposed to be in real time and should therefore be able to assess what minimum altitude needs to be maintained it would seem. That seems quite simple to pull off you take a 1000 meter pathway and assess the highest elevations involved then add a safe minimum altitude. I don’t get why this is such a challenge.

While on an approach or SID this option doesn’t exist because there certain altitudes are established and printed on charts. These altitudes should be what MSFS ATC uses to direct you to the approach and runway. (Doesn’t always work…I know)

My suggestion was only for the enroute phase of flight where ATC will play jojo with you in the described scenarios.

it often helps to ask for a higher clearance if you are still some distance from your destination and the aircraft can go up 2000ft or so.

I believe the answer is that MSFS (like all default MS sims before) rely on the pilot flying the correct published approach. ATC was not designed to give you obstacle or terrain clearance, and neither unfortunately was this.

In order to make this feature realistic, just a general 2000 ft or so, probably won’t do.
How would you descend to an airport in mountainous terrain?

This ATC should issue instructions in conjunction with published procedures.

I am hoping some changes like this come with the ATC upgrade that has been talked about.