I noticed usually when I have live traffic on my atc will stop talking, it’ll just be me replying to nothing. I have my atc set to the azure option. 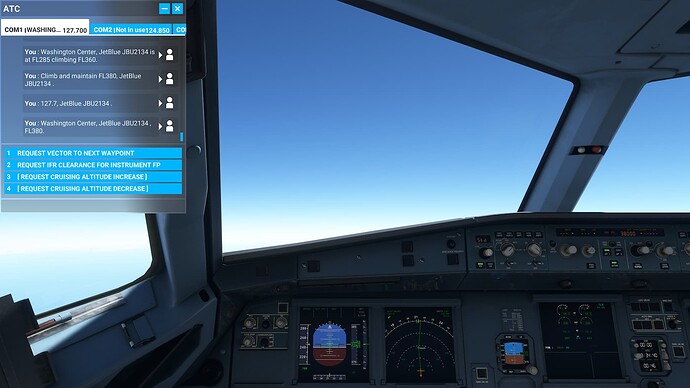 Hello @ilbambino96,
There is a bug topic here if you wish to contribute to it:
https://forums.flightsimulator.com/t/bug-logged-cannot-hear-atc-instructions-and-other-aircraft-suddenly-while-ai-copilot-still-responds/418969

Do you know a fix to it?

To my knowledge there isn’t one. It appears to be a random bug.

I wonder if it’s because I have it set to azure?

You can try using local voices by turning off Azure. I’ve not experienced it and I use Azure. However, most of my flights are around an hour.

I had the same experience yesterday, I tried turning Azure off, it made no difference, so I then turned Axure back on, still made no difference. I guess once ATC gives you the silent treatment it’s game over.
Makes the flight very peaceful though, and unfortunately much of what ATC tells you is wrong anyway.

So far it’s still working with live traffic and azure off. Just the voice sounds different compared to when azure is on.

Switch the ATC window to Com 2 and also do the same to the A320 radio on the console.
Most times that will restore it.

I can say the same about this bug:

It begins with Azure not saying anything. And then when you switch into offline voice, they keep on being mute, until you quit to main menu and start new session.

Actually with hindsight it’s probably the best that can happen, when you consider how the developers took a relatively simple and useful ATC system from FSX and converted it into the garbled and confusing mess that is Azure ATC. If it were possible to fully automate ATC on a budget then the Air Traffic Service providers of the world would have jumped at the chance to reduce their staffing numbers and save money. I doubt Asobo and Microsoft will ever achieve a successful system, my only hope is that they simplify it and get back to radar vectored visual or ILS approaches as in the old FSX days. I’m not hopeful as in over two years of further development its worse now than before.

my only hope is that they simplify it and get back to radar vectored visual or ILS approaches as in the old FSX days.

That would make it much worse.

If you remember FSX ATC correctly, they cannot handle SID/STAR - in a lot of airport this is just silly and makes FSX/FS9/FS2002 very arcade-like since you would have to fly-in through city full of skyscrapers, they are very moody and cancel IFR if you don’t follow their direction to CFIT, they don’t have option for you to actually descend, they cannot say airline names correctly if not for custom EditVoicePack jumbled voices.

While Azure ATC is far from perfect, it is just one catch-all solution in order to get the computer say things more accurately. It is funny that they can’t pronounce AIR DO correctly (they spell it), or pronounce NEW SKY as “newski”, but let’s give them sometime to learn. This bug is relatively minor, since we have the automated AI assistance in handling the ATC comms. However, that can also be broken, as I have done yesterday. Interupting their pushback request using the “AmbitiousPilots’ toolbar pushback” will totally break the AI and they’ll refuse to be your co-pilot.

I’ll keep that in mind the next time it happens if it does, thanks.

Well if you think that the current system is correctly handling SIDs and Stars, and is an improvement on the old system then I think you are mistaken. The current system doesn’t really handle anything correctly, and I doubt it ever will. The old system managed to correctly vector for ILS or Visual approaches which worked reasonably well in the majority of cases. In the real world the majority of IFR flights are radar vectored onto the ILS, as its the most efficient method of expediting aircraft movements at busy airports.
All Asobo need to do is to add a fourth option to the approach selection,
1 VFR
2 Radar vectoring to the ILS as in FSX
3 Radar vectoring to Visual Final as in FSX
4 Pilot Interpreted Instrument Approach, (STAR, VOR, NDB approaches)

Yes the old system needed some tweaking at certain airports with non standard approaches and terrain issues, and those special cases could be designed for individual airports, but there is no way that the current system is ever going to correctly provide ATC services for every airfield. Its too complex a task. Adding live traffic makes it virtually impossible to operate at busy airports because the current ATC system is far too verbose and less efficient at handling traffic than a trained Air Traffic Controller. Its almost impossible to obtain a clearance at many airfields because of the number of aircraft requesting pushback etc. Live traffic should be restricted, dependant on the number of runways in use, to allow users to take off and land.
The system needs simplification.
1 Move the ground handling and pushback system away from ATC involvement, as in real life.
2 Don’t try to control taxiing aircraft, make pilots responsible for ground separation from other aircraft and simply clear to the holding point. Stop giving a list of taxiways and runways to cross, as these are normally completely incorrect.
3 Reduce ATC chatter to the absolute minimum,stop nagging aircraft to expedite climb or descent and clear the runway.
4 Airborne traffic info is almost universally provided too late, and often unnecessary as the aircraft is separated by more than the minimum 1000 ft or 5 miles. Provide the information only on traffic which has less than 1000ft separation and will become less than 5 miles laterally.
5 When you check in on a new frequency there is an instant response, then a pause before ATC rethinks what instructions to give and a further reply. As this is a computer based system I’m sure these two transmissions could be combined when necessary.
6 As an ATCO I was always advised by the regulator to avoid unnecessary politeness and stick to the essentials. So can we dispense with the universal ‘good day’ after each change of frequency. It doesn’t even sound as if its sincere.

That is a very American way of looking at it. Of course almost every airport in the US has “manual”, “expect vectors after XXXX” departure / arrival procedures. Elsewhere like in Europe or Asia, you are expected to follow the SID or STAR pattern.

Agree on all the improvement points. Except:

2 Controlling taxiing aircraft: they probably need to program the AI better, especially the ground vehicles
3 About nagging about the aircraft to clear runway: it should be AI programming, not ATC. The old one will directly cancel IFR if you don’t comply with their altitude assignment and ignore their nagging for prolonged time.
6 In other parts of the world, this kind of greetings is quite common (usually just “thank you” from the pilot). But in MSFS, that “good day” sounds pretty sarcastic, delaying, and procedural, which makes it rather annoying.

I think we have to be realistic in terms of what can be achieved within the Sim, and expecting Microsoft to provide a ground service to all taxiing aircraft is really not going to be practical, especially as its obvious that most airfield layouts, while looking similar to the real airports are not completely correct and the taxiway designator are often incorrect.
I think the best that could be achieved at airports would be a ‘Taxi to RW09 holding point B5,follow, or give way, to the British Airways A320’. The current system seems based on the FSX one , and the old railway ‘block’ system, where once an aircraft had entered a taxiway, no other aircraft was allowed to move on that taxiway. This is obviously incredibly inefficient and impractical, but presumably relatively easy to program.
Ground vehicles should only operate on the aprons in proximity to the buildings. In real ife they are permitted to operate un controlled by ATC on aprons, giving way to moving aircraft. They do require an ATC clearance to enter the Manoeuvring area, ie taxiway and runways.
I don’t have a lot of experience of the American system, but I’m reasonably confident that most IFR flights into European airfields are radar vectored for ILS approaches as a matter of course. The really great skill of Approach Radar controllers at busy airfields is their ability to selectively vector different aircraft types, with different wake turbulence requirements, in order to provide the most expeditious approach separations while allowing the Tower controllers to keep up a good departure rate. If aircraft were allowed to follow STAR approaches and then self position on to the ILS the result would be a greatly reduced movement rate. Probably less than half that achieved with radar vectoring.

I hereby grant you a freakin’ medal for helping me with something that bugged me for three flights in a row now. Looks like ATC doesn’t like FSLTL, but your method at least forced them to once again start talking to me at least.

I’m having the same experience. Yesterday I lost the pilots response to ATC also!

You have to log out and log back in again . Also if MSFS starts with an update it will be fine . It’s a bug and it’s been reported numerous times