Normally when I land I enable auto breaks (medium) just before landing along with speed breaks armed and sometimes I use reverse throttle to slow down as well.

I’m just wondering when and in what situations these should be used and if I should be using them together.

I landed earlier in the a320 at Dusseldorf and just had auto breaks medium and speed breaks armed and slowed down quite rapidly on touch down so didn’t need to use reverse throttle.

It’s my impression from reading posts here and some basic research, that reverse thrust is a no-no IRL (due to issues such as noise), and is only really used in emergencies or in very slippery conditions.

Not an expert here…just passing long info I had seen/heard.

Reverse thrust use restrictions vary from airport to airport, for example, there are few restrictions to it’s use in the US whereas in congested European areas where noise is an issue there might be a restriction based on time of day. Pilots are responsible to be aware of such things on the routes they fly. As far as simulation is concerned, I use autobrake and reverse thrust along with speedbrakes on every landing. However, I use the Operational Performance Calculator to adjust my landing speed, flaps, and autobrake setting based on the runway and my weight. There are also operational considerations such as the preferred exit for each runway at many locations. Another detail the pilot will consider in planning the landing.

IRL arming spoilers is mandatory. Generally you would only use reverse idle (to reduce noise and engine wear). Full reverse might typically be used at a hot and high airport or short runway where you want to try and reduce brake temps (especially if you have a short turnaround).

You always set to auto break to Low in dry conditions and “reasonably “ runway length, which applies pretty much to all European International Airports.

If at all (noise abatement) only idle reverse is used and or allowed meaning the thrust lever stay at idle while the reverse doors open. Close before reaching 80kts (foreign object damage).

I’ve actually never flown in a flight where a full reverse thrust is never deployed. But then again I live in SEA/APAC region, my country has short and narrow runways for the domestic only airports so different airline and airports regulations might be different from other places.

Of all the flights I’ve ever been on in the region, I always see the engine reversers open and the engine spools up really loud, only for a short time until it spools down and the reverses close. So I always assume they’re always on Full Reverse and never on Idle reverse thrust. I’ve actually never knew there is such a thing called reverse idle until I start flying the A320 in MSFS since I never experience anything like that in my flights.

As for @RomoRocket post, It depends on situation. For me, if it’s dry and I’m flying into a standard international airport. I always use Autobrake Low because I don’t want to overheat the brakes unnecessarily. Besides a deceleration rate that’s too fast is also uncomfortable to the passengers. Even on wet conditions, I still set it to Low if I’m still flying to big international airports with long runways.

Autobrake Medium is when I’m landing to medium length runway for regional airports that’s long enough to handle an A320 whether wet or dry.

On shorter runways (Like EGLC London City Airport, or VQPR Paro Airport), whether wet or dry I use Autobrake Medium, but after touchdown I apply maximum manual braking to override it because it’s really short and I need maximum stopping performance. I get brakes overheat warning sometimes, but it’s still better than overshooting the runway.

Either way, I apply Full reverse thrust regardless, because I’m using TCA Quadrant hardware that’s difficult to have Reverse Idle thrust since it doesn’t have the physical detent to place it to and it’s difficult for me to manually hold it in that Reverse Idle position due to a broken tensioning mechanism (ie. I can’t place the throttle in any position other than the detents without sliding off like it’s on ice). I imagine it’s even harder for Xbox controller to apply the same method too.

Autospoilers is mandatory for me too, as they’re not only used to slow down, but they’re crucial in “spoiling” the airflow to the wings and give it downforce instead of lift to keep the aircraft on the ground so that it doesn’t float anymore. So depending on the situation, I just adjust the autobrake but everything else is the same.

Idle reverse is mandatory on most jets due to the various systems logic requirements.

Unfortunately the thrust reverser animation on all MSFS aircraft is completely wrong, apparently a left over from FSX.

IRL, as soon as the thrust reversers are unlocked, they move to the full upon position within 1-2sec.
Applying more than idle reverse thrust doesn’t change the reverser doors/sleeves/buckets position.
If you apply idle reverse in MSFS, absolutly nothing changes concerning animation and the associated cockpit animation are missing as well.

Thank you, been using medium auto breaks for all my landings so far, so good to know about using low for longer runways.

Also just to make sure Im on the same page, reverse idle is when the throttle goes from idle into reverse where it displays a red line about a quarter of the way up on the throttle gauge. (in outside view). I always land with cockpit view, so can never tell where I have the throttle in reverse very well as Im concentrating on getting a good landing.

Forget the outside view, especially with the broken reverser animation.
Furthermore the reverser gauges are as wrong in the external view as they are in the cockpit view.

How are you selecting/adjusting reverse thrust?
The most realistic option is to used the “toggle throttle reverse” command and then modulate reverse thrust with the hardware throttle.
If you use the toggle command you know when thrust revers is active.

Once toggled I suggest that you move the hardware throttle just a tiny bit out of reverse idle.
As soon as there’s more than 0% reverse thrust the green REV icons on the engine gauges will appear and the reverse levers in the cockpit will move as well.

Concerning the autobrakes;
Most Airbus pilots agree that the autobrakes have too few selection possibilities.
LOW is to weak for most airports and MED is too strong.

Using a pad here, I just press the throttle button (X) I think.

When I use my mouse pointer to increase/decrease throttle in the cockpit it only moves one engine throttle lever, I cant seem to find a way so they both move together, only way I find is using the button on the xbox pad.

From a procedural perspective, in US, we use reverse thrust very frequently - basically all the time. As PZL mentions, on some airframes it’s needed for logic.

No one wants to overrun a runway, the interest of safety is paramount.

Speed brakes/spoilers cause flow separation from the wing. This has twofold effects: killing lift and increasing drag counts. They should deploy as soon as weight on wheels switch is activated over the mains gear.

Autobrakes as needed depending on weight, speed and runway braking action (due to wet, dry, snowy conditions) & length. IRL, a crew would get weather & surface conditions before final and consult performance charts. A well-experienced crew might be able to tell what settings to use on receiving the reports without consulting the tables.

A lightly loaded CRJ landing slowly might use low autobrakes with spoilers and minimum reverse thrust when landing on a 12,000 foot runway.

Of course there are some situations that call for more aggressive braking:

I think these runway exit instructions would work well if we have a functional BTV autobrake setting, but then again, we don’t really have an aircraft that has BTV available as of yet.

Many airports have specific taxiways assigned to vacate the runway.
Even when ATC assigns a different exit you definitively don’t need a BTV function.
Simply look out of that big window in front of you and apply the brakes accordingly.

In North America it is standard fare to use all three of those for every airliner landing, but auto brake low in all cases unless on a very short or contaminated (wet, icy) runway. Reverse thrusters are nearly always used. In fact, Air France pilots got suspended after the Toronto runway overshoot in 2005 for failing to engage reverse thrust immediately and taking 17 seconds after touchdown to reach full reverse thrust. The investigation by the Canada TSB faulted the pilots mostly citing that reason.

Edit:
“ The accident was investigated by the Transportation Safety Board of Canada (TSB), with a final report issued on 13 December 2007. The unfavourable weather conditions, and the poor landing decisions made by the flight crew, were found to be major factors leading to the crash. The visibility was poor and the plane touched down nearly halfway through the runway and the thrust reversers weren’t on full power until 17 seconds after touchdown.”

“The pilot not flying did not make the standard callouts concerning the spoilers and thrust reversers during the landing roll. This contributed to the delay in the pilot flying selecting the thrust reversers.” 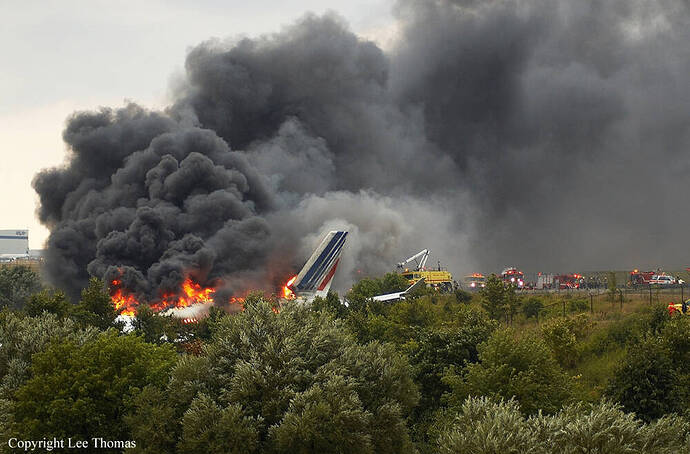 Idle reverse is mandatory. Just in case the aircraft is not slowing in the way expected. Some noise sensitive airports require idle reverse only landings either 24/7 or at certain times.

Reverse thrust does however keep the brakes cooler for short turnarounds where abiment temperatures are high and winds low. You can’t takeoff with brakes that haven’t cooled sufficiently.

Stopping promptly can also save fuel and time especially if the gate is close to the touchdown point. 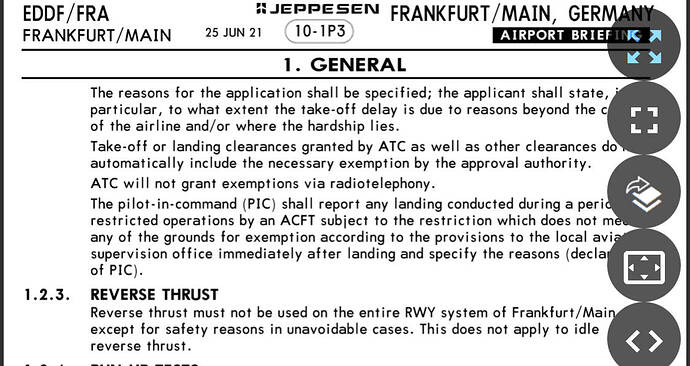 The reverser rules for each airport can be found eg in the Airport Briefing pages.

Here the example for EDDF … confirming what has been said before. Idle Reverse yes, Reverse Thrust only in „unavoidable“ cases eg emergencies.

Looking at the posts, I suppose the summary is that it looks like most European Airports have a tendency to limit the use of reverse thrust, while other countries might actually made them mandatory on landing.

It kinda make sense though, since Europe is very much densely populated due to the smaller country boundaries and the airports are situated next to towns and residential areas. While in America or other places, they might have more land area to make airports in a very sparsely populated area away from towns and cities so noise is never really that much of an issue.

I don’t read “unavoidable cases” as emergencies only but as in when it is operationally necessary, e.g., short and/or contaminated runways. But not just to save brake wear, hit an earlier taxiway exit, or because “I always use full reverse”.

It’s not only noise. For the whole flight you are trying to save as much fuel as possible and you can easily eat up the few kilos you saved during the flight by applying max reverse thrust.

Since reverse thrust isn’t even considered in the landing distance calculation (on dry runways) and max reverse doesn’t increase the lifetime of the engine, I can’t imagine that max reverse can be mandatory.
Furthermore from the cabin it’s impossible to tell how much reverse thrust is being used.

Yeah, I guess it’s difficult to listen to how much reverse thrust that the pilot applies from the passenger seat. But I’m pretty sure it’s definitely not an idle reverse thrust, since the engine spools up really loud than it would on idle.