Is there something MS or Asobo can do to prevent antivirus false-positive reactions on FLIGHTSIMULATOR.EXE, being “infected” with IDP.Generic. 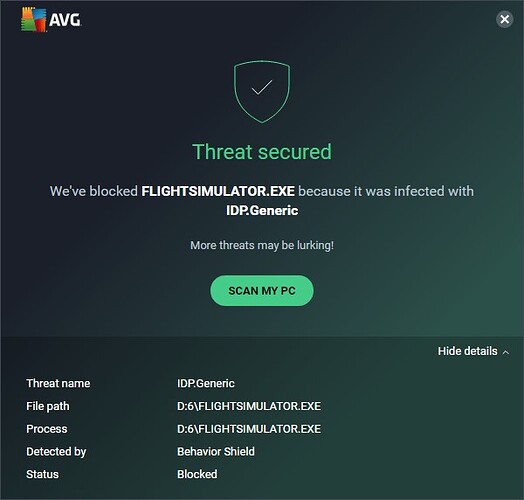 I have already uninstalled AVG (I am tired of those false positive alarms blocking my legal and popular software) and investigating which one to buy instead.

However, is there Asobo or MS can do to influence at least the most popular antivirus companies? Some people are having difficulties with the same error on Avast and Kaspersky, according to other forum posts. I found even some users being a bit freaked out about this.

You might want to report that to Zendesk. I ran a scan of the “WindowsApps” folder contains MSFS, and it found no infected files.

The small file size is due to my installing MSFS on a different disk, so in the original folder on C there is a junction point to my D drive, so pretty much the only thing in there is MSFS.

No probs with Kaspersky - great deals on Amazon and tons better than AVG which is well know for these nuisances.

The threat is usually categorized as false positive detection. This means that the antivirus program that you’ve installed has detected a legitimate or harmless file as risky and either removed or quarantined it. In any case, the detections end up leading to the removal of significant system files or data. But not every threat that is detected is a false positive.

Generally, IDP.generic warning is caused due to an outdated version of your Antivirus. Developers of various antivirus softwares do not frequently update, leading the softwares to push fake positive notifications.

idp generic Avast or AVG is caused due to an old version of Avast or AVG antivirus software and is generally fixed by updating the software to the latest version. Another potential cause of the IDP generic virus is an old, outdated Java software version.

this is internal problem of antivirus app. I recommend leave that not correct functional apps and buy something better. In case pf use free antivirus apps you can everytime be in problems.

I’ve only had the sim since May 21 but i wish I had seen this thread sooner. After numerous: