Avro Lancaster Bomber a.k.a. "The Lanc" 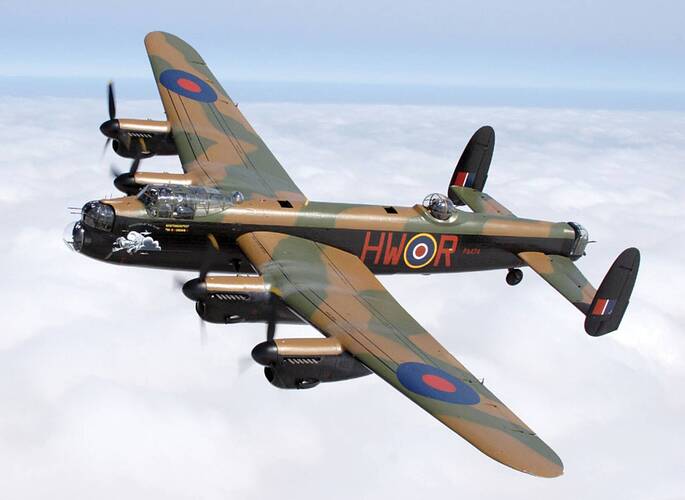 Schermopname (43)1655×1208 90.7 KB
Although my first and only encounter with the Lancaster was hugely impressive, I can’t remember being extremely mystified. The Charisma the Lanc might lack it makes up with its versatility and unrivalled payload.
“Never was so much owed by so many to so few” Winston Churchill uttered after he witnessed a day of air battle from the operations room at the beginning of the battle of Britain. Practically alone, Britain faced the full weight of Nazism for a full year. As the Spitfire was pivotal to halt the German Western advance, in repressing this regime we ow a lot to the Lancaster bomber, delivering the unimaginable amount of 608,612 long tons of bombs in 156,000 sorties! years later while reading fact like these and books about the history of bombing, the training and the vast horrors the crews had to endure, I did get mesmerised by this legendary aircraft after all.

Please give this plane the honour it deserves. I d love to re-enact the dambuster run. Gratitude and regards,

1 Like
Canadian Historical Aircraft
Can you consider the Arvo Lancaster airliner variant as a future legend aircraft?
OnCourse2013 May 1, 2021, 1:11pm #2

One of my favourite planes as a boy… used to love making the Airfix kits. My uncle flew the Lancaster in WWIi. Beautiful aircraft.

Aeroplane Heaven just announced they are doing one for MSFS.

Awesome. Thanks for letting me know. A sneak-peek into the detailed modeling of the Lancaster's front turret.

I have a close friend who is 99 years of age who was a flight engineer in ww2. I am looking forward to having him aboard an MS 2020 Avro Lancaster before he sheds his mortal coil. Please move it along Airoplane Heaven.