On a flight from BIRK-CYFB I noticed a serious banking problem on ap.
What could be the problem?

Wish you all a very happy New Year!! 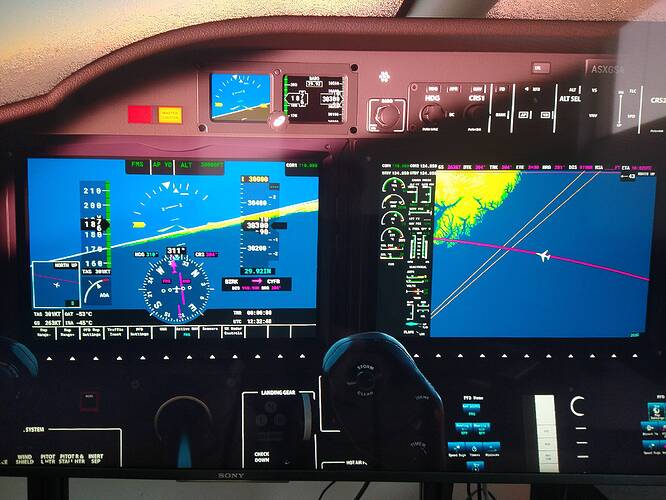 Ah, glad someone else has this too. I had never seen this before. When there is a lateral offset from the magenta line, the plane will stay banked for a long time, only very very slowly getting back on the line. Your MFD shows you essentially have a tail wind, but I saw it with strong crosswinds. I was thinking that there’s a problem with coordinated flight. When playing with trim I was able to get the plane level again but without really understanding what was happening. I have the workingtitle g3000 mod installed.

My coffee spilt over several times, it’s a mess in the cockpit…

Notice the ice on the windshields in the screen print above?

Could this be a Pitot heating issue? Someone earlier was talking about how the two Pitot switches were not working correctly for them. I do not have enough experience to know if this could cause the plane to bank like this.

I was not able to trim the airplane level.
Something other weird and it’s definitely a bug.
If you trim ailerons for instance to the left the left aileron goes down and the right aileron goes up, normally you get a right turn if the ailerons deflected like this, but the airplane banks to the left as expected if you trim to the left youre going to the left.
Maybe there is a connection between this behavior.
I dit not notice this issue before the update.
Mess it is indeed with all the spoiled coffee

The pitot (speed sensor) heater switch is only for the pitot it’s not for defrost the windows or wings.
In another flight with higher non ice condition I had the same banking issue.
Before the update I had a flight with a frosted pitot after enable the switch the tas speed indicator starts working again. Did not test this with the current version yet.

What could be the problem?

Couple of things to note here:

The PFD shows that you are in uncoordinated flight with a right bank of 12 degrees and a huge side slip. Look at the little bar under the bank triangle. Normally you can only achieve that kind of picture with full right rudder, but the autopilot and yaw damper is on, so something is badly wrong here. I’m guessing mods or altered config files?

You’ve entered a flight plan of 1200 miles between BIRK and CYFB, and no waypoints in between. That’s why the GPS track is curved – it’s flying a great circle route.

The TBM 930 is not an airliner. It has a service ceiling of 31000 feet, so basically you have it as high as it will go, but not as fast as it will go. You’re not torque or ITT limited, so you’re just moseying along at a ground speed of 263 knots even with a 43 knot tailwind. It’s still going to take you over 3 hours to fly the remaining 900 miles to CYFB.

It’s -53 degrees C outside, and you have ice on the windshield. Since windshield and airframe anti-ice is off, I’m going to assume you never turned it on, even when you climbed through known icing conditions during your ascent to 30000 feet.

“What could be the problem?” I’m not sure. It sounds like the other posters have some ideas to look into.

Hi thanks for your reply, Iam aware of some odd settings in the sim, my planning was to stop at BGKK for fuel and coffee so it was not really 1200 mile trip

I am trying to solve the banking issue and tried almost any function, the photo is taken in some point during problem solving.
Although your reply is verry informative none of them can solve the issue.
In my case actualy I had nose wind the arrow gives a 180 degree reading that’s why my gs is so low.
Also the aileron trim gives a visual wrong deflection if you trim ailerons to the left the plane goes left but you see the left aileron visually going down and the right going up.
I don’t have any mods installed currently.

In my case actualy I had nose wind the arrow gives a 180 degree reading that’s why my gs is so low.

Forgot about the MFD wind bug – you’re right – that would account for the slow ground speed. By the way, pilots usually get winds aloft forecasts and choose flight levels based on the altitude where they’ll get a favorable tail wind.

So maybe this behavior is related to the buggy autopilot / GPS bug. Since you’re having it fly a great circle route, it looks curved on flat map projection, but on a spherical projection, it’s a straight line. You fly a straight heading. So maybe the autopilot is trying to mistakenly fly a constant curve instead of a constant heading like it should?

Hi Yeti it’s interesting what you are saying, maybe the wrong deflecting aileron trim got something to do with it. at the moment here in the Netherlands we prepare ourselves for celebrating new year, at the moment I had like a good or not airman behaviour a few brewsky finished.
When the clouds or gone I take a closer look to it.

A very happy new year from the Netherlands!!

At the moment I had like a good or not airman behaviour a few brewsky finished.

As an native American, I’m jealous of how you can speak more than one language and I’m also highly entertained that you know the word “brewsky”. And one of the simple pleasures of flying the sim is having as many brewsky as you would like. And go ahead and wear some klompen while you fly!!

Did you put the fuel selector in the Auto mode or manual ?
could be a problem generated by an asymmetric fuel load …

I have the same thing, at any altitude if the Auto Pilot is engaged.
The fuel selector is drawing from both tanks.
The 1/2 Bank Limit button is on (and off, I’ve tried).

It worked normally for a couple of months until a “fix” unfixed it.
I am patiently/unpatiently awaiting it to be fixed, as it is really lame, especially when I was showing the game off to a friend of mine who is a pilot.
She was unimpressed.

You 're right, I also noticed problems to maintain selected altitude, problems with the vs.
The AP is unusable.
I suspect it could be a problem in the flight model as the inactivation of the AP does not fix all these problems.

Hi Yeti, thank you for the compliment!
Where famous about our wooden shoes indeed, and surprised you know they called klompen in my native language.

I am sure if you ask some kids here that they don’t know what klompen are.

It’s easy to explain why most dutch people speaks multiple language’s.
Whe live in a very small country surrounded bij other languages.
Germany, and France in particular are a bit chauvinistic.
If you like to see more then windmills and wooden shoes on a holiday, whe have to go to our neighbor country’s and try to speak theire language.
Dutch television programs and films are rubbish so most television shows and films are American and British, that’s why I know the term “brewsky”

All the technical interesting stuff is also english that’s why almost everybody speaks more or less english here, it’s also a major language on high school.

The ap in the simulator is broken there are more people with the same problems.
I have send a report to ms about the issue, as soon as I have a reply I will post it here.

All the best from the Netherlands

Where famous about our wooden shoes indeed, and surprised you know they called klompen in my native language.

I looked up “wooden shoes” on the internet. Brilliant.

I was on a flight back from Amsterdam (Schipol – the company I worked for at the time had an office in Nieuwegein, just below Utrecht), and was flying business class on KLM. So we finally land at LAX, and we’re standing there waiting for them to connect the jetway and open the doors, and it was very quiet. There was a big, solid barrier with “KLM” in big, silver letters. After a while it started to get a little awkward, so I turned to the passenger next to me and said, “Most people don’t realize this, but they named the airline KLM after the sound those wooden shoes make – klump, klump, klump.”

Dead silence for a long five seconds, then the whole front of the plane started laughing.

As for banking and AP issues, Satun says:

You 're right, I also noticed problems to maintain selected altitude, problems with the vs.
The AP is unusable.
I suspect it could be a problem in the flight model as the inactivation of the AP does not fix all these problems.

We need to start clarifying the difference between the Autopilot – the part that flies the plane – and the FMS or GPS system. The AP works acceptably in all aircraft, while the default GPS and FMS systems and their mods may not. When people like Saturn say the AP is unusable, I believe they are actually talking about the FMS / GPS system that is supposed to follow a flight plan, and not the AP itself.

Speaking of just the default AP in any plane as of 1.12, it correctly:

WHAT IT DOESN’T DO

And by the way, some of the reported, weird behavior has been caused by: