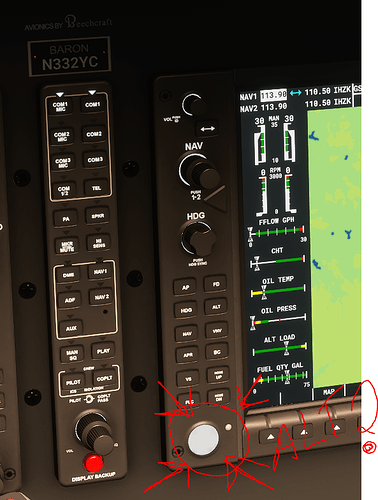 Yep… I noticed that last night when I tried to use the 58 for the first time… is this intentional?

Might be intentional, I know in xplane it doesn’t have alt select either

Then where is the Alt Selector in the X plane version?

It doesn’t exist is what I am saying, only has alt hold functionality. So my assumption is that the aircraft doesn’t have a selector in real life either

You can use the keyboard command "CTRL PG up and PG down to set the altitude on the PFD. I agree, there should be an alt set knob on the MFD…exactly where you showed it

I’m not sure, but if you check the other aircraft using the G1000, i think you will find that the kno b is present.

Also missing the knob from the lower left corner of the PFD in both the Bonanza and Baron. But the one on that side doesn’t get used that often.

Nope. We all miss it. I was just checking around here to see if it had been reported yet. This is a pretty big oversight in that it renders the aircraft almost unusable for IFR flights in the sim.

Just a heads up, can still be used fine without it until the panel is fixed (like @UNCLEHEM mentioned). Just need to use the default key command (CTRL+PAGE UP/DN), or bind it to a control input. I have altitude, HDG, and speed bound to knobs on my HOTAS.

ALT button on MFD works another alternative. Use the Nose Up/Nose Down for pitch.

The missing ALT button threw me as well

Besides everything, a missing ALT knob. ■■■■■. Really?

There is a lot of code that was not cleaned up either, by the commenting in the code, the silly mistakes, no basic winds anywhere in the world except western europe (sorry, 225@3)… the last few weeks may have been a bit rushed.

Yeah I know just thought there was a mistake somewhere and they decided to have the autopilot function like the non g1000 version and things got confused with the teams working on it. Was more looking at it from a different perspective not necessarily the correct perspective

I doubt that it is intentional. It is, however, disconcerting. A fix would be most appreciated. Thanks