Hello all. I wonder if any of you tested both the mods available for the Bonanza G36.

This is the improvement project for the MSFS default G36. It all started as a simple edit of some configuration files but it has since grown into a fully-fledged modification that improves all aspects of the default G36 and introduces new features. This was made possible with the help of the community consisting of both enthusiasts and G36 pilots (for a list of contributors, see the end of this post). Current version: 0.64 The 0.6 update adds an all-new engine start simulation to the G36, a …

but yesterday I experienced some serious issue getting above 10000 feet. Maybe I didn’t set the mixture as expected but seriously reaching 13000 was a nighmare.

I know there’s another mod “Bonanza G36 Turbo Mod Available” but I’d like to know if any of you used both and have a comparative opinion… expecially considering SU5 and all others recent updates.

The Robert Young Mod continues to work mostly because it’s a small modification to engines.cfg. In the same vein, you don’t get anything other than that. For me, that’s all I needed - the extra top speed. I’ve taken it to 12,000 easily, the performance makes it a fun cruiser.

you mean this one?

Hello everyone, V3 has been released and is fully compatible with Microsoft/Asobos October update and patch (1.10.7.0). Apologies that I might have got the update number wrong in the upload at Nexus and Github. You can be assured that V3 will be...

I don’t even understand if it’s the same turbo mod as this one…
https://forums.flightsimulator.com/t/bonanza-g36-turbo-mod-available

They’re the same Mod as far as I know.

Just copy the engine.cfg of the turbo bonanza in the G36 improvement project folder

Yep thats the one

I’m on the team that made the Improvement Mod. It seems like your mixture settings weren’t quite right - I’ve been up to 16000 with ours so far. I’m in the middle of a flight at the moment but will double check all is working as expected after I land.

Just checking are you using this version? 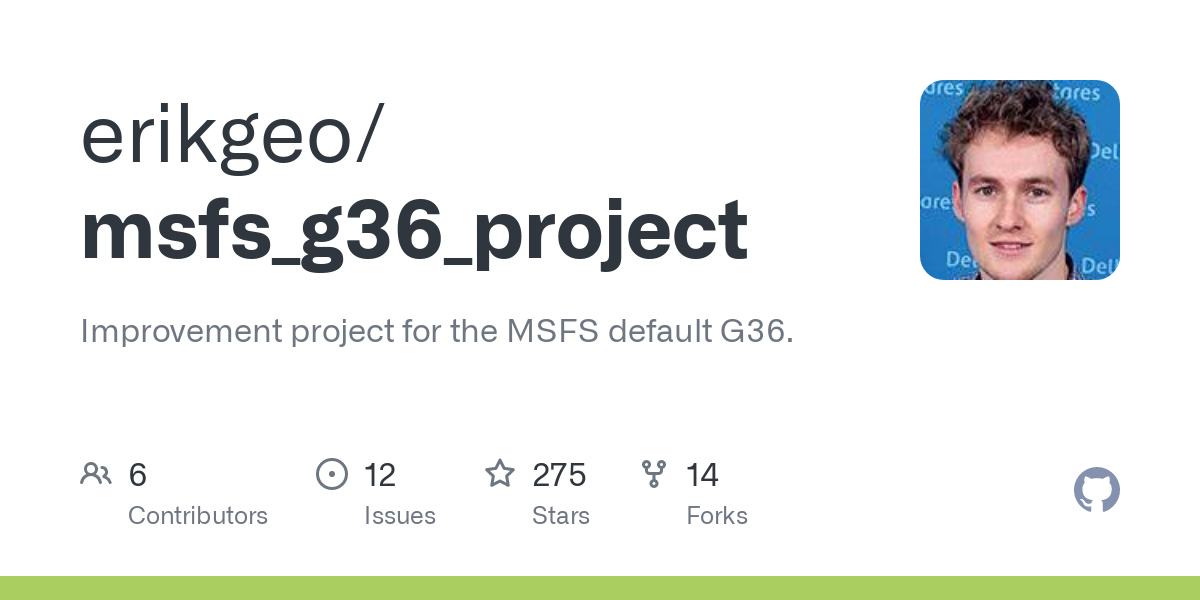 This release brings the mod up to date with the changes made in Sim Update 5. Working Title - NXi Compatibility The WT NXi has a completely new codebase that was built entirely from the ground up a...

Yep. I’m using the same version.
Can you tell me how much you lean above 10k feet and how you set the rpm lever?
Also which Ias and rate of climb you have at those altitudes?

I’m just trying now… (hard to tell where the mixture leaver is but will screenshot. I’m running the NXi so don’t have access to our engine pages (hopefully WT get these sorted at some point)

At the moment I am pulling back the mixture and watching manifold pressure, rpm and fuel flow until it rises/drops. When drops I enrich a touch and leave it at that. @jonasbeaver might be able to give more insight.

Don’t forget our bonaza has a normally asperated engine so flying in that rarified air is fairly hard for it. She is much better between 8k and 10k with nice thick air. 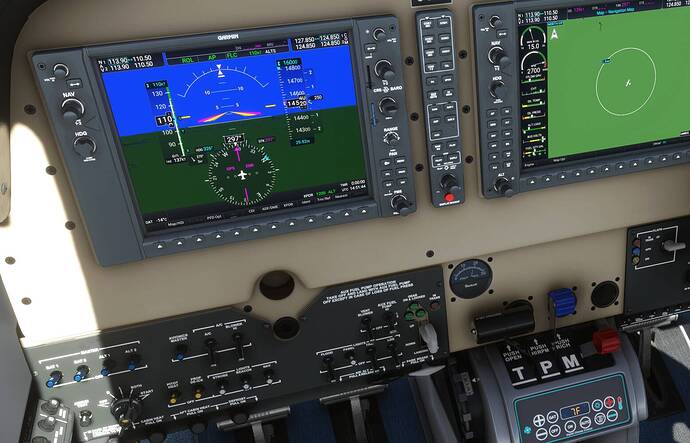 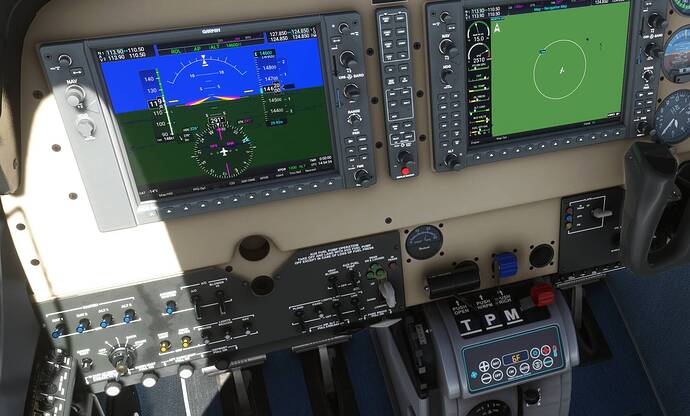 yesterday I experienced some serious issue getting above 10000 feet. Maybe I didn’t set the mixture as expected but seriously reaching 13000 was a nighmare.

It’s a naturally-aspirated airplane. It’s going to be difficult.

It’s a naturally-aspirated airplane. It’s going to be difficult.

Really this should not be an issue at 13,000ft. The topic of climb performance came up in a different thread recently so I did some testing at that time. I found that, in spite of the G36 service ceiling ostensibly being 18,500 feet, with the “regular” (not turbo) G36 mod, I could happily climb to over 20,000 feet. You can read about it here:

TL,DR: at 12,000ft. the aircraft was climbing at 800fpm and even at 20,000 ft. it was still climbing at an unrealistic 200fpm! This at full throttle, auto mixture, 2,700RPM, FLC mode and IAS 100kts. Because I thought the normally aspirated mod improved performance I repeated the test with the stock G36. This did even better: climbing at 950fpm @ 12,000 and 250fpm @ 20,000 ft. Noted that this was with 2 people and half tanks but still: according to the POH that is not realistic. The linked post includes a copy of the POH climb data for the aircraft.

At the moment I am pulling back the mixture and watching manifold pressure, rpm and fuel flow until it rises/drops. When drops I enrich a touch and leave it at that. @jonasbeaver might be able to give more insight.

^^
This is what I do, you can also run it a little lean of peak or at peak… with a perfect engine like in the sim, it will run fine forever. To match a little closer to what I do in the plane, I run wide open throttle pretty much the whole time, climb to where manifold comes down to 25" or less (above 5000 generally, but happiest between 7,000 and 9,000, I only go above 10,000ft if I have to or there are some seriously good winds). For leaning I pull to peak, then back in a little rich of peak.

What is way wrong in the sim is when you enrich the mixture, fuel flow should always go up. Fuel flow doesn’t decrease as you increase mixture, that’s not how it works. Its a limitation I haven’t seen corrected in any flight model and don’t know if its possible.

Because of this limitation, I find peak fuel flow, assume that is peak EGT and run a little rich of that out of habit. My main goal in the plane is to keep CHTs below 190C. I don’t know why Beech chose Celcius when everyone else was using F.

Thanks for the link, really interesting read!

When we were developing the mod I remember a LOT of testing, graphs and various conversations

to get us where we are today. At the point we were developing the mod there was very little documentation and a lot of trial and error.

It’s probably time to relook at everything with fresh eyes again and more knowledge on the subject and check that we don’t need to tweek the engine parameters again. What we did find was there was a lot of tradeoff when tweaking some item, would conversely affect another so I believe we tried to get the POH numbers as close as we could to normal operating ranges rather than super high ceiling stuff.

I shall start to have a read through documentation and get a testing regime in place - maybe tweak a bit more.

I see you lean a lot more then what I did. You keep also rpm lever to get the top rpm.
Another thing is the speed. I used flc at something around 90 knots while you did 110. I have to retry with all this things in mind… it’s a challenge at this point.

I can absolutely assure that it would be.

@CaptMatto You guys have done a brilliant job! I truly love this mod. Things like the ground handling and engine behaviour etc. is just sooo much better than the stock model. If I were you I would not lose any sleep over the high altitude stuff. By all means tweak it for your own personal satisfaction but, for the normal operating envelope, I think your mod is fantastic.

The highest I ever flew IRL was 12,500ft in my T210 as I never had functional oxygen in the aircraft. I have never flown an F33/A36/G36 in real life: used to own a 1962 Debonair with the 225HP IO470 so my performance perspective is based on that. Typical VFR cross country flights would have been at 7,500 - 8,500 ft. I would assume (always dangerous!) that, while the spec performance would differ quite a bit, the perceived take off and climb performance between the lighter, lower powered Debonair and the heavier, more powerful G36 would not be that big, so to me the modded G36 feels absolutely great.

Thanks for the work you have done: it greatly enhances my enjoyment of the sim.

I tried again following the various suggestions of this thread. I am satisfied with the result. After all that matches your RL experience more or less. I won’t venture too high without oxigen, in any case.

In real life I fully accept that it could/would be an issue. But based on my testing in the sim with both the base and modded G36, I certainly did not find a problem climbing up to (an unrealistic) 20,000ft with the sim aircraft. If you are finding difficulties in climbing to and beyond 13,000 ft. in the sim, we must be doing something differently.

And just to confirm my configuration when I did the testing:

One possible cause of difference could be leaning as that could affect power available quite significantly. As mentioned I used auto mixture (I have done enough manual leaning in real life to be happy to leave it to the game in this case…). For interest’s sake I will repeat this test again at max gross and additionally record MP and fuel flow at different altitudes and report back.

One thing I fully forget to mention was that I had 5 people on board due to FSEconomy flight.
I should try with less weight