Love this new simulator i think right now it is one of the best, but are we getting updates on Bing maps currents one is old even when i fly over my house or home town lots of old maps come up not showing the currents ones

unless microsoft pays a company to release new imagery or update its own database, no.

My understanding is that it will updated whenever Bing maps is updated.

Why does it not work Google, then they would not have such a problem. I don’t understand.

Because they would have to pay billilons for the right to use googles data while bing maps data is owned by microsoft.

Although if i was google Id make an addon to the game that used their data while adding ads on liveries and in MFDs.

According to Asobo/MS, through their Q&A’s, automated responses via Zendesk, and through their development updates, have stated that Bing data updates will be handled regionally, with a focus on one specific region of the world at a time, to eventually cover every region of the world. These will be known as ‘World Updates’ and will be released for free every 2-3 months. This is in addition to the ‘Sim Updates’ which will also be released for free every 2-3 months, but on a different release schedule.

‘World Update Series Episode 1’ is set for release in mid-September.

In addition to the Bing data updates, each World Update will also include: “new hand-crafted airports, some new POIs and we will also attempt to provide some more activities … like landing challenges.”

Not necessarily… Bing Maps has my home (newly built in March/April 2019), but Google Maps has yet to show it.

Microsoft hasn’t invested in Bing Maps in years. Why didn’t they try to get better photos during the development of MSFS 2020? I do not believe that anything will change in this topic.

Please everyone no more excuse making or brush off anecdotes for Bing.

The forum has studied now in detail, direct side by side comparisons of Bing versus Google, and Google has been the clear winner in every comparison.

It makes Bing look rather pathetic, with its low resolution, outdated photos, and green roads.

Leading up to release, more than one wishful thinker posted comments that directly claimed that Bing imagery was somehow superior to Google and somehow it was like this hidden ace that just hadn’t been exploited to its potential yet. We all wanted to believe, myself included.

But by insisting on using Bing, in reality so far they have under-delivered on scenery and accuracy in countless cities, regions, towns, fields, landmarks, etc, compared to the level of detail promised and implied in the many releases of extensive promotional material, period.

Just tried to look up Diego Garcia island in the Indian Ocean in bing maps…
Bing didn’t come back with a location.
Grabbed the GPS coordinates , pasted it in the searchbar and… voila, a beautiful picture of the island , including airport.
Will try to go there in FS2020 tomororrow.

Edit: FS2020 recognizes this location by its name… my bad…Nice field to practice take-offs and landings btw.

They should have a running online list of locations that are being improved natively, regardless whether it’s a Bing update or something the team hand fixed and anything in between. Basically anything that could be fixed live without an upgrade you need to install and therefore improvements people don’t even know are happening. 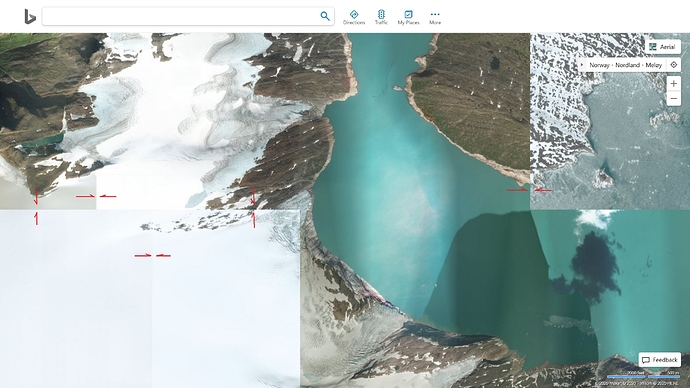 I really hope MS gets better map data. This is quite immersion breaking, flying between seasons minute by minute. An example from Northern Norway

I have seen the same in Canada, and not that rural, near Hinton and Edson Alberta. However, I have also found the opposite where Google Maps has a scene in winter but Bing has it in summer (and at a higher resolution). No need complaining about MSFS using Bing over Google maps, that will never change. Instead, focus on improving the airports, DEMs and scenery and eventually with the updates, Bing will slowly become more current (but there will always be a lag between current, and what is seen in Bing or Google Maps for that matter). I am surprised no one has asked for historical imagery to be offered into MSFS to fly historic flights from the past

I wasn’t thinking of Google Maps actually but most every nation has a gov survey departement. They are usually quite good and probably not insanely expensive since they are public:)

You are quite correct and actually I never thought of that. Many governments supply the data for FREE but not in real time online datasets. I believe the US has the philosophy that once the tax payer has paid for the imagery once, it is then free for distribution. Other countries licence the imagery, but may be free. I believe Canada and Australia have some limitations on the use of the imagery gathered by their governments in commercial endeavours such as MSFS. Canadian data is available on geogratis.gc.ca where there are also DEMs and Satellite imagery maps based on the topographic map system index.