Maybe the guy who coded the light engine no longer works for this project, and nobody else understand s his code?

Crazy as it might sound, that might be possible given the one year progress of restoring what was lost from the early alpha night lighting:
Current improvements contain bugs/shortcomings that wasn’t present in the first editions of night lighting, almost like the artist forgot how night lighting is supposed to looks/work and stumblingly trying to recreate what was once in the sim.

At least we would appreciate an update on this. Its been there one year now! Must push out XBox first;)
Not sure about which resolutions experience this:

Still not (able) to fly at night due to this. Not good Asobo. Patience is running thin…

I keep going back in my brain about the runway lighting being on during the day and someone somewhere mentioned it was "in the base code’ and then my brain flicks back to the fact some of the base code is FSX and maybe even earlier.

I’m very interested in the 4K being “confirmed” and knowing if that is 4K standard 16:9 aspect ratio of 3840X2160 … because it really shouldn’t be affected? In my experience it is in any ratio outside of 16:9 is where the problem crops up.

Yeah it’s quite a few code-relics we’re stuck with that backdates FSX, like streetlights turning on/off exactly at sunset/sunrise, while IRL that’s not the case since streetlights will be visible sometimes hours before that during overcast conditions & such.

So seems like its resolution dependant - not aspect ratio.

This gets more obvious in higher resolutions, but due to Asobo’s handling of scaling, it’s made even worse at wide aspect ratios judging from all supwide screenshots I’ve seen posted since release.

So aspect ratio definitely seems to be involved, but not the root of the problem: the lamp-texture style and its scaling.

Asobo seems to have opted for a less than optimal lamp-texture type with not so good scaling over distance/brightness when they abandoned the extremely promising night tech we could see in the early alphas up until sometime mid-alpha / spring2020 judging by posted screenshot. That is when we got those big fuzzy orbs fading in transparency instead of size over distance.

Here’s a 4k shot , full image in the upper left corner, and the rest is what’s inside the green cropped area, enlarged 200%, showing how those huge bulbs maintain their angular size even in the distance, while fading in just transparency instead of size/brightness, which makes those bulbs bigger than trees and houses in the distance. Like an out of focus photo. 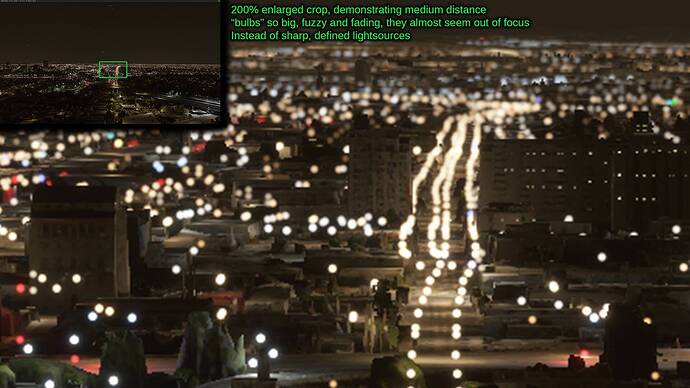 Exactly what I’ve been reporting all along. Yes 4k 16:9, individual light orbs or sources are a blurry mess! Floating lights that are not attached to anything in a so called next gen flight sim? Asobo please improve on the lights. You got a beautiful sim with sub par lighting. We know you can do so much better.

Even on AI aircrafts and airport lights when viewed at a distance appear to be over pixelated (squares). Really kills the immersion of night, dawn, dusk flying in the sim.

At least we have bug-logged tag on this now.
Think it came 4-5 days ago? Can’t remember it was there earlier. I would be very happy to get ‘1080p look’ of lights as a start at least

I do see some issues with the scaling of lights with 3440x1440. It seems more obvious with certain types of lights than others. Seems consistent with other reports, I’m sure it’s more visible at higher resolutions too.

will depend on the size of the lights or bulbs, larger lights more distorted, smaller ones a little less, the higher the resolution the worse it is. 5760x1080 here, already reported this as a bug almost a year ago !

Hello,
Same issue here since the launch. I was looking for a bad configuration of my setup but i understand now the issue is with my triple screen ( 5760*1080 ).
At night its horrible.
On this printscreen :
1 screen full hs VS triple screen full hd

Nearly 3 weeks ago @Jummivana promised to check with the team, but seems like the team has other priorities than responding to nearly year old bug.
To be honest I wasn’t especially convinced if we are going to have any response anytime soon

This is a bit strange as many Xbox users are probably using 4k TVs which are also affected, not only the ultrawides.
We should probably wait for multiple display support implementation, however the time frame for this is rather wide 2021-2022, so it may still be anytime between 1-15 months.

This will be fixed with Sim Update 6 according to the public patch notes.

This will be fixed with Sim Update 6 according to the public patch notes.

Glad to hear it!

From the release notes:

Hopefully something will finally be done to the poor choice of lightbulb texture with the huge fuzzy pale semitransparent floating orb appearance for medium/long distances, that’s been pestering us for over a year now…
Missing the sharp pinpoint and colorful lamps we saw in the pre-release and alpha material before it apparently got botched. (For reasons we can only guess)

Heard it too on a twitch stream. And see it now in the patch notes. Excellent news! Can’t believe it

I truly hope they cure the root of problem, and not just the “symptom” …

I have the same monitor as the OP and am extremely ■■■■■■ off that despite numerous issues being raised about this issue, there is still no acceptance or plan to resolve it from Asobo. If I had known that MSFS would look such a mess with UltraWide, I would have purchased a standard 4K monitor instead. I no longer fly at night as a result of this.

confirmed to be fixed with SU6 according to patch notes mate