Brief description of the issue:
Bora Bora looks much better with most of the reefs surrounding the main island showing beautifully. However, the Southwest quadrant is not showing all of the reef. Bing Maps does have the data at least at max zoom, lower zooms do have the data mostly, but somewhat of a mozaic of multiple satellite images.

Provide Screenshot(s)/video(s) of the issue encountered:
Here is MSFS 2020 currently looking North-up, staring straight down (with missing reef detail in the SW quadrant): 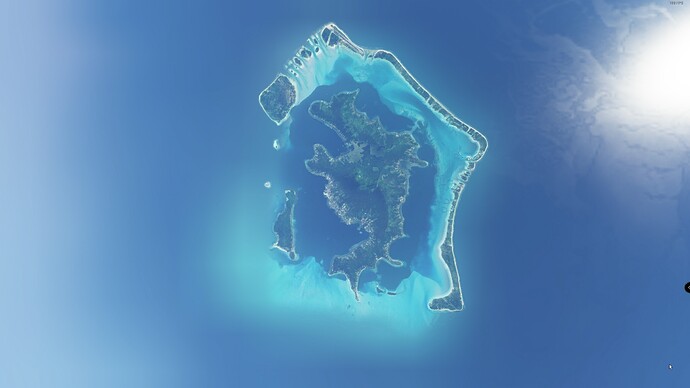 Here is a straight down view in Bing Maps for comparison: 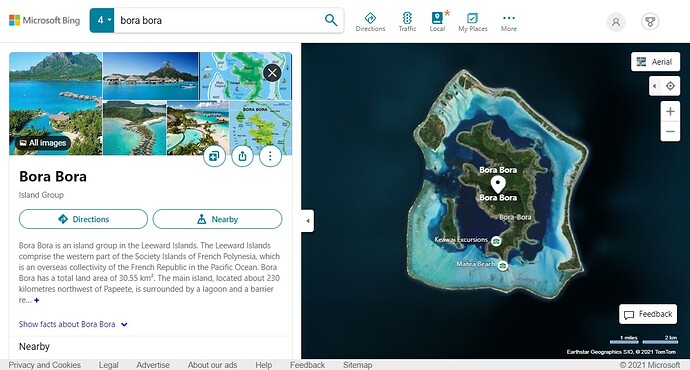 Detail steps to reproduce the issue encountered:
Fly to Bora Bora and look for the reefs in southwest quadrant including the entrance into the lagoon area.

Did you submit this to Zendesk? If so, what is your ticket #?
Not yet.

Unfortunately I’m not sure if the full water detail for Bora Bora can be salvaged. If you look at the highest level of detail in Bing Maps, this specific area is using inconsistent and incomplete imagery. 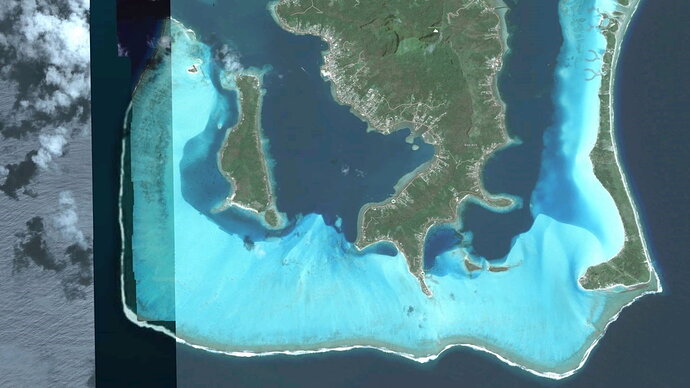 Perhaps they could use a lower level of detail to fill in the missing information, as shown in your screenshot, but I don’t think they’ve ever made an exception for that. When full-detail imagery is missing, the simulator simply seems to fall back on generic offline textures.

However, Moorea can be improved. Like the island itself (and sadly many of the islands in the French Polynesia), there are some cloud artifacts over the tropical water, but right now the in-game representation is blurring too much detail, and as the trailer shows, it doesn’t have to be.

I would gladly take the mostly complete hires data from the existing Bing Maps imagery over what’s there now. And, I also assumed maybe they could at least use the complete lower res image in Google Maps to fill in the gap for the small area not completely covered for Bora Bora’s hires southwest reef.

Yes, fixing more water masks of Moorea, and the many many other islands of French Polynesia would be a really big improvement. Not to mention, the thousands of other reef waters visible from space around the world. I have to admit, it also took Google a long time to include such water masks in Google Earth/Maps. The imagery deals allowing mapping services like Google and Bing Maps to share globally are not free.

By the way, I’ve actually sailed in those waters at both Moorea and Bora Bora. Hence my particular interest in seeing it rendered well.

Unfortunately they cannot use any of the Google Maps imagery as they are not partnered with them, so we’ll have to do with what Bing Maps has to offer. I can see two ways to slightly improve this matter, one would be to use as much of the high-detail data as possible with a stricter water mask, like this awful mock-up. 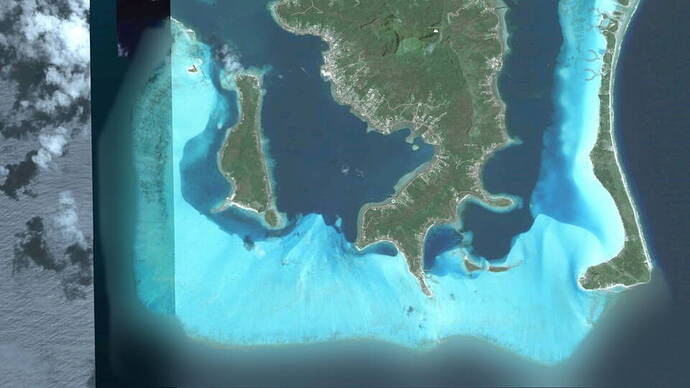 Or they could use the immediately lower detail level to fill in the missing data, but it means that it will not look good compared to the full detail of the rest of the imagery. This could be countered with only some partial blur (as visible in the same spot from the Oceania trailer) to make it transition more smoothly to the high-detail parts of the imagery. 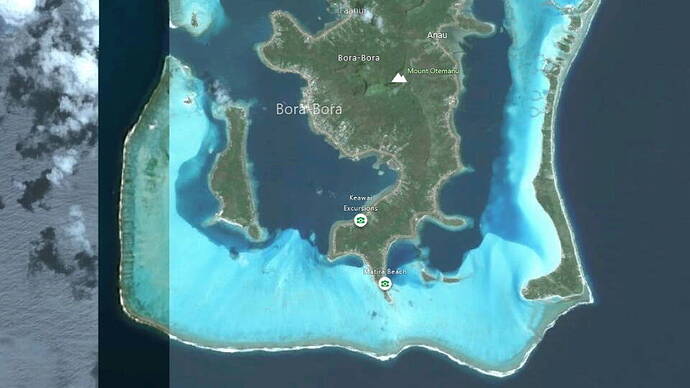 In the end, that’s up to the scenery team doing the water masks to decide. They might feel that putting the same amount of effort in a different area will result in a higher benefit (western France has got some awesome water masking with the latest update). Or, they think they might be onto better imagery for the area soon, which would render the current water masks obsolete, that means it would be a good idea to wait until they have better data to work with.

I do hope these islands, as well as many other parts of the world ruined by cloud artifacts, will look better someday. An Oceania World Update would be great. It will be exciting to see what the Bing Maps team will be able to do in the next decade as the simulator continues to be supported.

Until they can get a sat over it on a cloudless day I think we’d be out of luck with issues such as this - and a whole lot of tropical places unfortunately.

I agree. My hopes for a proper representation of the sheer beauty of the Indonesian Archipelago, for example, are probably never going to be realized. I suspect such an area, despite its stunning beauty (the world’s most populous coral seas, biodiversity, and warmest oceans), is just not very high at all on Asobo’s list of priorities (assuming it even makes the list, which is highly doubtful).

And, yes, probably the same pessimistic outlook for most of coastal Africa, S. America, India and much of the Middle East, etc. All the evidence so far points towards MS/Asobo focusing exclusively on European and N. American customers (with an honorable exception for the Japan update).

Next, we are told we’ll get Scandanavia. I’m certain that makes many here very happy, and I know they’ll probably really enjoy what’s to come.

Microsoft just needs to search for already available imagery from the providers and purchase the right ones. If you check Google Earth’s historical imagery for a given location, you can see many cloudless images for these areas in their archives from public sources. No need to fly a custom aerial flyover. Microsoft probably already has a contract with such providers and only needs to request the ones they need as part of their subscription. That’s the way Google does it for their imagery (I blogged about Google Earth for a while).

Bora Bora is awesome with these hotel in like trees around water. It miss a lot in mfs

Yep! … Bora Bora without hotel zone is not Bora Bora.