[BUG LOGGED] ATC asking for descent in to terrain?

gotcha, best just ignore them for now then, and hope they don’t cancel ATC

Do you have a STAR and approach in your flight plan? Maybe it’s because you don’t have one.

They are talking more about smaller airports like in Colorado that does not have full approaches. Also going from airport to airport is only VFR typically. I would like if all the planes would scream “TERRAIN…PULL UP” at you.

So, I was approaching NUUK airport in Greenland (BGGH) at night and ATC told me to go to 2600 ft. for runway 5
Suddenly the aircraft warning shouted ‘500’
As I pressed the barometric pressure adjust, thinking this was the problem and that I was significantly lower than I thought, I noticed in the PFD that there was a mountain in front of me (which I couldn’t see outside in the pitch blackness of night)
Yes, that mountain is higher than 2600 ft. so I crashed into it.
Wouldn’t have thought that ATC was that vindictive.

Does anyone else have stories of how the ATC does not account for terrain when assigning altitude?

I agree. It feels like the ATC is only on point for hand built airports. Any other airport it just plays the ‘standard’ approach responses, including altitude commands. Regardless of terrain.

Hello, apart from the many ATC errors, there is one that is annoying, it is the one that repeatedly asks an airliner to descend to 10,000 feet, because it would be 20,000 feet above. above the altitude which would have been assigned to it! Is it really realistic? or the pilot would be completely drunk? 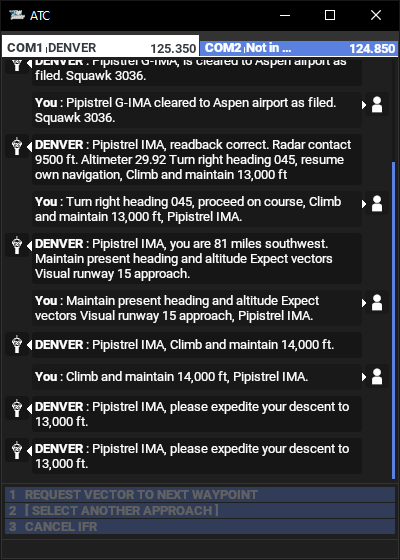 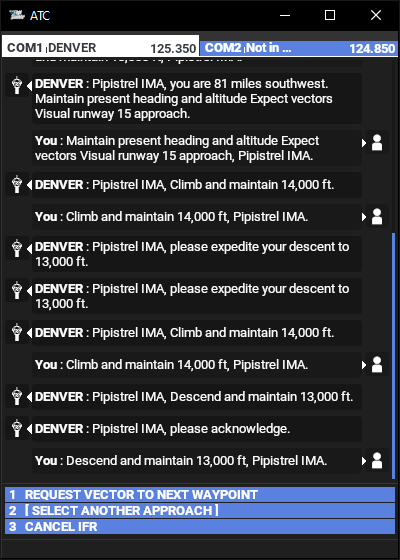 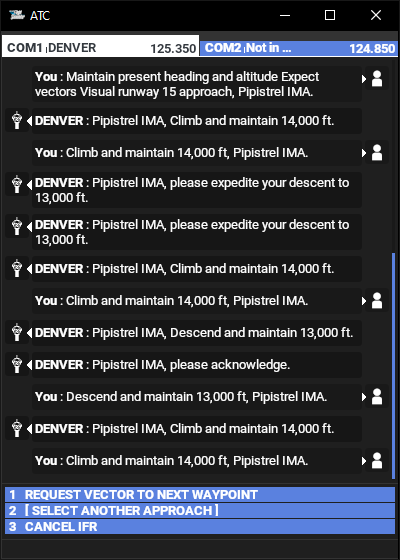 Denver Tower ATC requested me to descend to 13K while the sim is generating 14k mountains peaks right in front of me. Reported as a bug.

I had this happen from KGPI to KMSO. They had me descend directly into a mountain near KMSO.

One thing I learned is that ASOBO has a problem with terrain altitude.
I’m going to fly KMIA-KLGA-KBOS or similar until these things get fixed.
From KDEN I’ve been told to mantain 6000, in the A320, which is good for excitement but potentially bad for traffic lights.
Today I saw a video of a guy “landing” in mid air above the dead sea because it is below sea level so at 0ft you just crash against the air…
Approaching KEGE with the ASOBO ATC is completely suicidal, the ATC wants you to descend to 4000ft when the airport is above that and you have mountains all around.
Take off from sea level, land at sea level, until this disaster is patched…

in the A320, which is good for excitement but potentially bad for traffic lights.

Not going to lie that made me giggle.

Nice end to a 4 hour flight.

Yesterday I flew from Pisa to Florence with the TBM. The ATC instructed me to descend to 2200ft then ascend to 4300ft then descend back to 3000ft - there should be no ascends after descend.

Then it vectored me straight into a mountain.

This is probably a legacy issue as in FSX it did the same but it should be addressed especially as now all the proper and up to date approach procedures are in the sim. ATC should use those procedures instead of simple vectoring ignoring terrain and other obstacles.

I crushed on monte rosa

This is one lf the many atc problems that has been around since flight simulator 9 (from 2003).

Had the same here flying EDDM to LOWI - had to vector myself manually and ignore ATC else I end up in somebody’s house! Maybe the ability to say “unable” would be good?

Minimum safe altitudes or minimum vectoring altitudes for a given area would be nice.

Is that working yet?