Not true, I’ve already tried it…

Well, this is once again disheartening. If you scroll up on this thread we were all told this would be fixed in SU6 so that was the expectation.

The mods could have been given bad info so no use playing the blame game but someone is blowing some serious smoke and people who started playing just to fly airliners are going to start walking away when it isn’t fixed.

so ur saying it wont be fixed in su6?

No one know yet, just wait until the sim update 6 release

We don’t know guys . I wish the moderators would let us take a poll here on this issue in regards to is this a problem mainly on the series s vs the series x . It seems more to be on the series s and I’m starting to wonder if it has something to do with the draw distance . Looks more stable on the x to me .

I don’t know where the SU6 promise came from, but evidence that they say they have recognised the issue exists and are working on it but in the meantime have issued all/many? of the bug fixes for SU6 that are now in beta testing already, and black avionics screens are not listed there tends to suggest that the fix will indeed be in SU7 at the earliest.
Not sure if the current beta for SU6 is fixed in stone or whether they will at last minute add updates to it. I guess you can’t rule out a hotfix either at some point, but you’d think they want to run black screen fix through beta testing too.

The SU6 Beta Bug List is here for anyone wanting to read through and look for anything relevant. (scroll down) 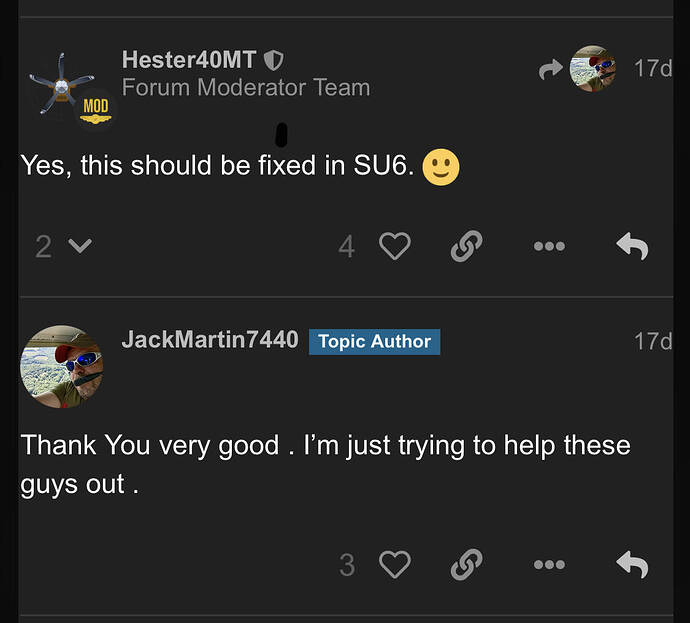 Based on internet accounts this appears to be a random occurrence across S and X so I think individual accounts of success/failures are not helpful. The ball is in the devs’ court with this one - I think the community has tested just about everything we can to work around it - I know I have.

I guess ‘should’ is the qualifying word in that statement. Could still be but depends how locked in the current beta is.

I agree it’s 100% in devs hands, but it must be hard to cycle errors & potential fixes when it’s on longish flights. That’s where I think community beta testing comes in eg wide variety of platforms, scenarios, distances etc. Much better/faster feedback.

Their communication previously on last weeks dev update did say “Avionics turning black during flight - Our QA team has been investigating this issue and we are looking at multiple root causes.”
No mention of SU6 there though.

What I think about all those problems is that people should not expect miracles from SU6 and 7. The CTD’s and the black screens bug seem to be complicated to narrow down, otherwise they would’ve been fixed already.

My guess is that sometimes in 2022 all those major bugs will be fixed and from that moment on the sim will truly evolve, i.e. 3rd party developers can safely bring out new stuff without worrying about having to update their add on’s after every single fix made by Asobo. All devs can then focus on just improving/optimizing the sim which is only possible when the flightsim is stable in itself.

It will still be a journey 'til we get there and all we can do is to enjoy it on the way and get the best out of the sim we have right now. And truly, even in it’s current, half broken state, it’s kind of amazing, despite all the problems.

So many people put so much effort in this flightsim project… it has to be good eventually. I want to believe…

Agree 100%. There’s the glass is half full type of people and the glass is half empty kind of people. I prefer to be the former. But can understand peoples frustrations. Somehow I’ve still managed to reach close to 200hrs flying in the sim since release despite everything.

Can you confirm it again?

People, just be patient and see what happens at the end of this month. They’ve said it should be fixed. Yes, it’s annoying and frustrating. But the game isn’t unplayable.

Again, just be patient. If it isn’t fixed after SU6, that’s the time to be vocal.

So according to the news it is not fixed with su6, just looked at least they found something, something with a battery.

Wasn’t one of the dev’s responses in the last Q&A after claiming to never have heard of it: ‘I don’t know, something with a battery?’

Maybe some positive news here. Before I tell my story, I would like to remind you we have at least three problems in long flights in Xbox:

Yesterday, I was stubborn and tried to make a long flight from SBFZ (Brazil) to LEIB (Ibiza) using the Cessna Citation CJ4.

I took two different steps than I normally do. I used cable internet and opened Spotify.

As always, I got in the cruise altitude and went to sleep, and 7 hours later I woke up and for my surprise, my flight was still active and with all the screens and avionics working. I couldn’t believe!

So, half of hour later, I was aligned to landing and… CTD… With no black screen. Of course it was a little bit disappointing, but hopefully we have a work around for this. I never had a more than 2 hours flight without black screen.

It can be a coincidence, but I’ll try again today.

Thanks for the story but it seems like the cj4 can last the longest of the airliners. Unfortunately there are no workarounds to this problem. It’s been identified as battery being one of the root causes. So we will have to wait until they can fix it and or other problems causing these blackouts and CTD issues.

Does the battery get modelled for energy consuption by default. Is it like fuel that can run out? I take it it’s one of those internal aircraft sim things that we have no control over? If so why does it happen across multiple aircraft though.
Too bad there isn’t an option like
Options > Assistance > Aircraft Systems > Unlimited Battery
to go test the theory out.

Yeah I agree I wish there were those options but yes it seems like there is more to the story than just the battery. The ground textures become very blurry before the blackout screens happen than the CTDs . I did notice that on my series x, it seems to fly longer without the blackouts compared to the series s . It also could be because of draw distance? Who knows . Just my take so far on this as I own both the series s and x also a very powerful pc which of course the pc works great.

Cool, you get to experience FS from 3 different perspectives. Can’t be bad thing.
I think the reason devs keep remembering battery though is related to this post (see whole thread from Aug 2020) about start up procedure whether done manually or by AI being wrong and not enabling battery charging. Only starting by CTRL-E was OK.
I can’t see how batteries running out mid flight would affect ground textures CTD’s etc though, that’s more like XBox system resources running out/ being limited in some way.