Big part of flight sims is the realism on the ground. Unfortunately the vast majority of airports in the sim which are default are awful.

Each world update is! And there are countless add-ons to buy to suit your needs. The sim is the vehicle that drives your sim experience.

There are 1000s of airports, I don’t see this as a realistic expectation…

It’s a very realistic option once the Scenery Hub/Gateway is operational. Not sure when this is happening though.

Thankfully since the sim’s release the third party folks have taken off and are really hitting their stride! I have many add-on airports and scenery for Hawai’i. Just waiting on a good PHNL to be done.

Third party airports are expensive though, especially buying thousands of them. I think it is realistic as it just means making adjustments to the AI and creating a better default airport look. Not asking Asobo to handcraft every airport around the world. I mean look at the default Las Vegas for example, it’s terrible!

My biggest wish would be to make the airports better compatible with AI traffic. So they park at the correct stands, are aible to taxi to the runway and vice versa and are aible to host superheavy aircraft like the A380.

I wish topics had a “DownVote” option as well as a “Vote” one, so we could really see what user sentiment is on some of these issues.

For me, I think the request is unreasonable. We already have thousands of well-mapped airports and while they might not all be totally “perfect” they are good enough to make flying a realistic and enjoyable experience.

Go to defaultLas Vegas airport and tell me how realistic you find it. It’s strange you’d down vote the suggestion of improving the sims default airports… I’m not asking you do to it….

Or instead of upvote/downvote, some sort of priority ranking system. For example some of my highest priorities would be flight model, planes and weather fixes.

Have you tried the PMDG B737 or Fenix A320? They are a different level, the feel different to all other planes so think it’s a new flight model. I get blown around by gusts and turbulence which I don’t face in default aircraft.

Third party airports are expensive though, especially buying thousands of them. I think it is realistic…

…so you think it’s reasonable to expect Asobo to do them all for free?

If airport details are high priority to you, may I suggest you buy third party addons for the few places you fly and know intimately? That’s not expensive, and you don’t have to worry about the thousands of airports you never visit and don’t know what they look like in real life anyway.

so you think it’s reasonable to expect Asobo to do them all for free?

Your comment has been living in my head rent free this past week, mostly due to it being adoring fan nonsense.

Most, and that’s likely 99.999% of airports are created, populated, and feature filled by the ever so promoted and advertised

; which has been left untouched since release.

To ask Asobo (or more likely, the Blackshark.ai) processes and pipeline isn’t an unreasonable ask.
It is quite often the case that the auto-texturing covers up more detail than it shows afterwards, where you can see through the fuzzy/awful ‘autoblended’ textures missing taxiways, hold short points, gate numbers, crosswalks, and much more.
Implementing, adapting, and reteaching the AI to detect and handle this information correctly will improve most, if not all airports around the world. Then work could be made on improving the textures/colouring/low res issues.

This will always be a bone of contention when popular airports such as Seychelles are little more if anything than a lone runway.

You telling people to dish up £25 per airport as a solution is much more unreasonable, nor is it helpful/needed.

Totally agree. It’s like he doesn’t realise that the airports are done by AI… he seems to think they are all individually hand crafted.

I don’t expect Asobo to have all airports looking great, but I do expect the taxiways and gate positions to at least be correct for the majority of them. Much of this gap can indeed be covered by freeware developers similarly to how people used AFCAD to edit default FSX airports and the community at least made them usable.

What I do expect from Asobo would be to have the tools available for that purpose, and for the default to at least be single/two-story terminals with a small, generic tower, not the Burj Dubai for a control tower at a GA airport, or 8-story terminals at most internationals.

I don’t know how Just Flight’s taxiway sign expansion has worked out because I haven’t tried it but they claim to have fixed thousands of default airports in pretty rapid time. Can anyone say if this is an accurate claim? Because if they can/did, then IMHO so can Asobo using the same methods I presume??

Anyway, not a knock on Asobo, just observations. They have a lot they’re trying to get to us but this would be a pretty major game changer for most people irrespective of platform.

EDIT: I am one of the fortunate people who can buy a ton of third-party and because of the afore mentioned issues with default, I literally do NOT fly to any default airports. I use primarily third party or bust (some of the more recent handcrafted airports are pretty good, but some of the odder ones are in looks only).

X-Plane did a great job in the early days of XP11 in developing a “terminal kit” which if you check their website is pretty good. Many of the terminals built with the kit look pretty similar to the real-life airport and I would go that route. And that’s a big deal for me because I don’t often fly into bespoke airports. I generally fly into smaller airports (like Albany, Wilkes-Barre/Scranton, Des Moines, Cedar Rapids, Duluth, Grand Junction, St. George, Great Falls, Augusta, Hilton Head just to name a few). Most are generic and to have more realistic terminal shapes would go a great deal to make the sim better.

And I agree-I’m not expecting perfection but something workable. The current terminals are horrid. If there’s one thing I’ve learned, is that competition in the sim community is great to have. MSFS and XP can both make each other better.

Also, I’d love for Asobo or another developer to release an AFCAD-like tool for MSFS. Airport layout is a big deal for me, and accuracy in that is key.

I would just like the default airport buildings be more realistic looking. I don’t care if they all look the same but just use a better quality default one.

I have two wishes:

That’s going to require new models for every single addon, yes? I mean you couldn’t use a default MS building in a third party add-on if I’m understanding what you mean correctly?

Look at the latest update of the Freedomfox where the developer mentions a couple of times that an update was needed to fix something that was changed/broken due to WUX.
My assumption is that this should not be necessary or other way around: I as a 3rd party developer would be really mad if I had to do work on my product every time MS/Asobo does an SU or WU. If no changes it still means I at least would have to test is with every such update. 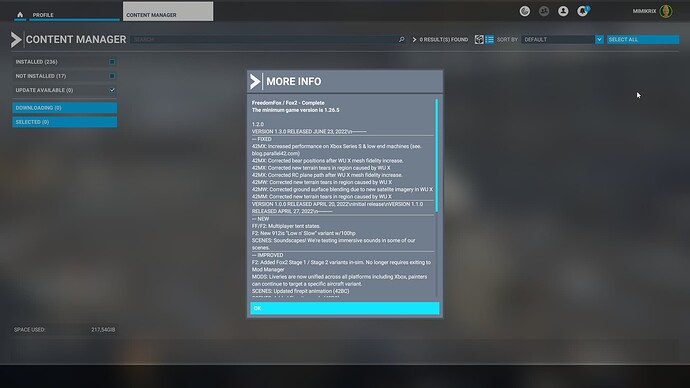