Can we have a graphics settings optimiser? Sick of fiddling with settings I don't understand

I want to run a utility which inspects my hardware and loads the best settings. I possibly need to be asked about my priorities: cities v landscape v weather or somesuch, but that should be the starting pont behind graphics settings. My car has Eco, Comfort, Sport modes - we need the equivalent.

Low to Ultra is a misplaced concept for 99% of users. I mean, who wants graphics worse than their hardware supports? And fiddling with texture this v texture that - groan. One for real geeks, not me.

This video was released shortly after the initial release of the sim, but it still covers most of the settings and gives a visual comparison. Use it to decide what you want to turn up for better visuals and what you can do without. There are some settings that make very little visual difference, but make a big impact on performance. The video is long, so grab a pencil and paper, along with a cup of tea, and take notes. 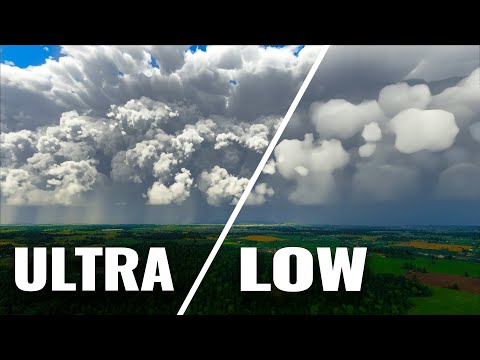 You already have… Nvidia Geforce Experience

I never use it though, because it seems to be a “speed/FPS only” thing.

What I hope they eventually do is to improve the information text boxes that they provide for each setting. So many say the same “Higher settings will improve the image but may decrease performance” or some such. I think we know that. I want a brief but meaningful description of the intended purpose of the slider. What exactly does ‘shadow maps’ do? (for example) The same could and should also be done for all those settings in the Assistance menu.

I get the feeling they think we automatically think like they do and would simply understand that the LOD terrain slider was the master controller for the other sliders. But how would we know this? without being told in a Q&A. I guess we’ll get there eventually but I still feel almost completely lost when I look at the controls settings. Too many cameras in my opinion. What is a smart cam anyway? and why does pressing space bar for landing view no longer work for me? it used to.

The problem with a “best settings” utility is that the best settings for your hardware is highly subjective. Some people are only concerned with high FPS/low stutters, where others have a higher tolerance for lower FPS and want maximum eye candy. And of course there is all kinds of variance between the two extremes.

With a tool like that most people would probably end up having to tweak to get to their own sweet spot, and would end up having to figure out what each of the settings are for anyway. That’s why I personally doubt such a tool would be much more useful than the default performance profiles that we have today.

Here are some threads that I have found extremely helpful in figuring out what each setting does and what its impact might be:

Completely retested for Sim Update 5 build 1.18.14.0, alongside new screenshots. Major differences include much lower CPU impact with Terrain / Object LOD, and more. Here is a detailed analysis of each setting’s visual and performance impact. I’ve benchmarked the effects of multiple different settings in a sterile scenario. This guide is supposed to help you make decisions on visual impact versus CPU / GPU impact in the simulator. Note that situational and hardware differences results can re…

After careful consideration I have determined that this message may be in violation of the guidelines, so as a precautionary measure it has been removed. msg 321913/1

Note that in the second thread referenced above the OP removed most of his original post for some reason, however if you scroll to the last few posts, someone has reposted it.

Um - you’re making my point for me

@JWales2895 Yes, start with a preference for FPS, or Eye Candy, or whatever, then tweak from there if you want. @FrankTheMoose thanks for the pointer to GeoForce, but, as you say, it’s only performance v graphics.

Also, VR needs to be a choice for all the same reasons.

What you suggest would be a start, yes. It’s bewildering. Geeks in this forum may enjoy endless tinkering, but things need to be much clearer.

A setting which dynamically adjusts the settings to maintain a constant frame rate would be good , eg it turns down settings at big complex airports and turns it up over sparsely populated areas would be good if it’s possible

A tool would be fine, because some would use it and others would do their own tinkering. Everybody wins. But in reality, my guess is that they would set the tool to lower your graphics settings to a point actually lower than necessary so your result would be positive.

What they wouldn’t want is for someone to run the tool and start MSFS with the suggested settings and get stuttering or low frame rates, then curse MSAsobo for giving them a worthless tool. So they would probably err on the side of caution and suggest settings that would give you a smooth experience when if you tinkered juuuuuuust a little bit, you’d make it much better.

And of course their tool couldn’t take into account your graphics card settings, what other apps you have running, etc.

That said, sure, I agree… bring it on. If you’re really a noob and need help (nothing wrong with that) then it may help.

I actually agree because often the best settings are counterintuitive. The only golden rule is not to get mainthread locked, achieved by either lowering cpu heavy settings or by raising graphic bound settings. How when and why really depends on on what is most important to you under what scenario but it’s graphical quality against playability the same as any other game.

Also the parameters change after every update and sometimes inbetween so there is actually no definitive right settings for any system (except Xbox).

A dynamic tool in the form of a graph with a marked golden zone should be a possibility.

Well, a tool might be helpful, but it would likely take almost as long to answer questions like “How good do you want your buildings?” or “How dense do you want your grass and shrubs?” as it would to just watch the video and take notes. And would that tool actually show you the fact that there is virtually no difference in visuals with some settings? I doubt it. This is the best “tool” I’ve seen for tweaking. It actually shows the differences (or lack thereof) for just about every setting in the Graphics sections. Watch the video, take notes, max out what really makes a difference and scale back the ones that don’t. You’ll invest about an hour’s time total, but you’ll come away with a settings package that best suits your needs.

Such a utility could ask some questions about your priorities and flying style and then match that to your hardware for optimum performance. It would need to factor in overclocking. In my case where everything is overclocked it would need to measure real performance, not just look at installed components.

Absolutely right. The number of pointless settings that have been added to please some people. Just keep it simple. It doesn’t need anymore sliders, if anything some need removing.

Back in the xPlane 10 days, I was interested in getting into flight simming, but every time I looked at the bewildering array of settings offered, few of which I understood, I said “nah”, I wanna fly, not deal with all this stuff I mostly don’t understand. Then xPlane 11 came along with a much simpler, and mostly more understandable UI and off I went!

There was a huge howl from the tinkerers that Laminar had “dumbed down” the interface at their expense to make the sim more attractive to those pesky “gamers” out there. Hm, where have we heard that lately?

IMHO, the number of options presently available in MSFS settings is more than adequate for all but the most rabid “tweakers”, though more than a little inscrutable for those of us who don’t care what anisotropic filtering is.

So, I use the already provided tool: LOW, MEDIUM, HIGH, ULTRA to get the perfomance I desire…working on the assumption that whoever put those combinations together knew a lot more about it than I do!

I would be against adding more and more “bloat” to the settings currently available.

Buy an Xbox, consoles are specially developed for people who do not want to engage in endless adjustments and optimizations of computers.

Well there is such a thing. It’s called Nvidia Geforce Experience :))))

Low to Ultra is a misplaced concept for 99% of users. I mean, who wants graphics worse than their hardware supports?

PC variations are in the hundreds of thousands. You’re never going to get something which automatically fine-tunes your settings for you.

As Flight Simulation is by nature a learning experience, it really wouldn’t hurt for you to watch the video from poster #2.

Well there is such a thing. It’s called Nvidia Geforce Experience :))))

I don’t understand why people are in here arguing that ‘an hour of my time’ watching an unofficial and possibly out of date video is a good approach!