Me and @CuzDawg3 were up to no good again. This time, we decided to hunt for ghosts at all the abandoned airfields around Elgin AFB and Pensacola NAS in the western extremity of Florida. Back in WW2, each of these neighboring bases was surrounded by a bunch of satellite fields for training purposes. Most of these abandoned after WW2 or Korea although a few remain in use today. The majority of the Navy fields were grass and quickly disappeared, so are no longer shown on the sectional. However, most of the Air Force fields were paved and rather larger, so quite a few are shown with the abandoned airfield symbol on the sectional. For some good info on all these abandoned airfields, check out this website: http://www.airfields-freeman.com/

However, despite being abandoned in real life, all the old Air Force fields around Elgin AFB are still functional airports in the game. Also note that this whole area is basically a no-fly zone, which makes ghost-hunting here an even worse idea than otherwise 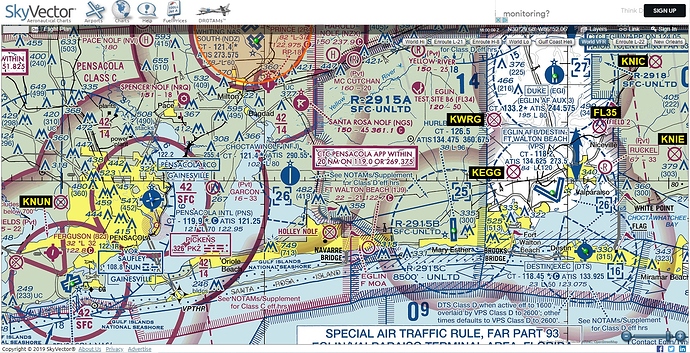 Me and CuzDawg3 already knew KEGG was working because we’d been there last week. We decided to start there because the name was appropriate for the jovial mood ;). However, there was a technical problem. We were both in X-Cubs but mine had a nice yellow aftermarket paintjob by @GuiFarias31. 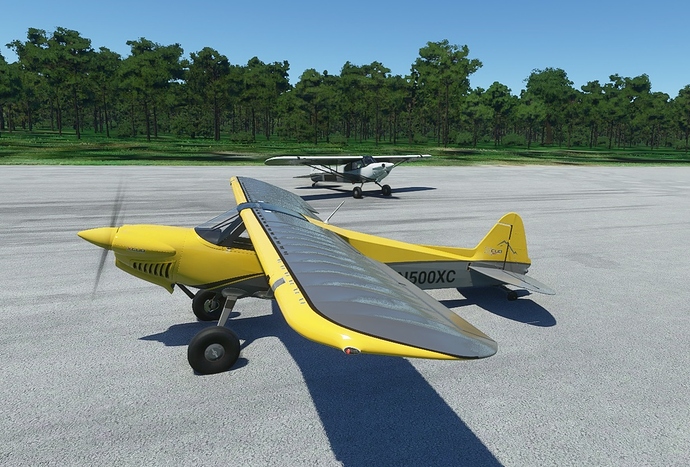 However, because CuzDawg3 didn’t have this livery, to him it looked like I was flying the generic “Moonanza”, only dragging its tail to mimic the X-Cub

Seems silly to treat a plane you have the 3D model for as a totally different airplane just due to the paint, so I sent Zendesk some feedback on that.

Anyway, from KEGG we headed NNW to KWRG. Both these fields are shaped like equilateral triangles out in the jungle. I forgot to take pics of them but hopefully CuzDawg3 did. From KWRG, we east to FL35, which is really big with long, parallel runways added to the original small triangle after WW2. But it’s obviously abandoned. Most of the buildings are torn down, the weeds are overgrown, and there are yellow Xs on everything. But the ramp has some planes on it, obviously conducting some shady business. Of course, we weren’t supposed to be here, either, so I’m not going to report them 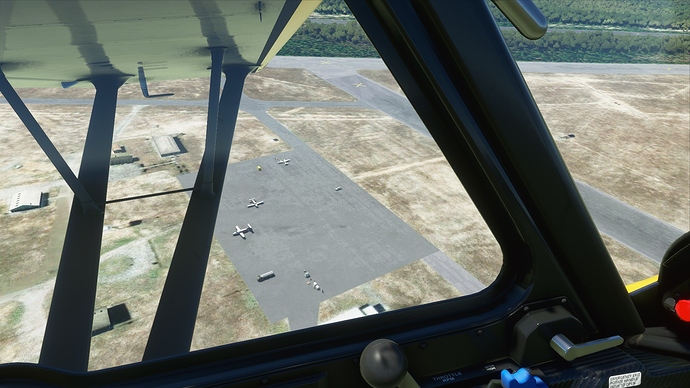 So then we headed ESE over to KNIE. This place seemed deserted so we figured it was safe to land here and look for ghosts. Besides, CuzDawg was jealous of my snazzy paintjob, and tired of looking at the “Moonanza”, so wanted to fix that. Besides, we both needed another drink. 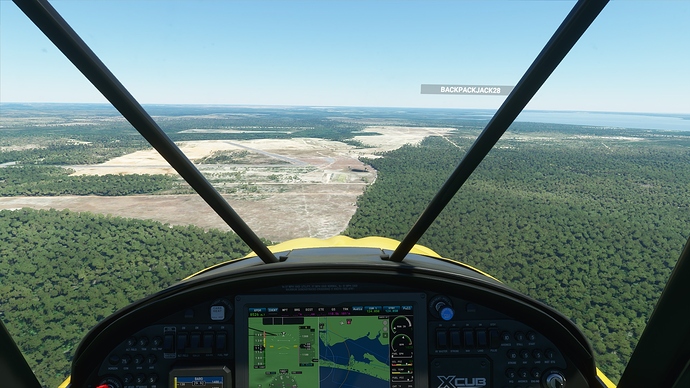 Once all was in order, we rendezvoused at KNUN, the old “Saw Fly” Field. Most of this nowadays is covered with solar panels even in Bing, but not in MSFS. CuzDawg3 played with the weather some so his snazzy new paintjob (also by @GuiFarias31) could reflect off the wet pavement. 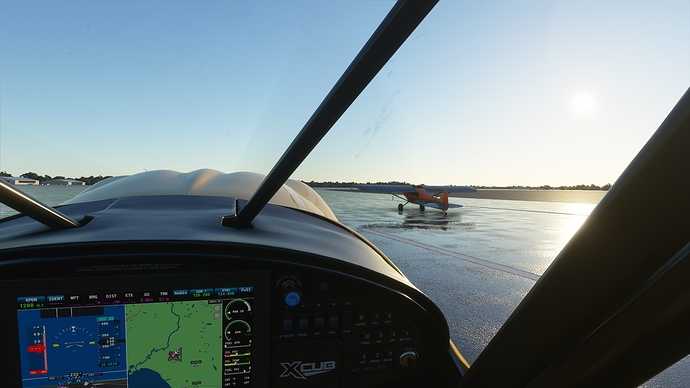 Then away we went. Our plan was to head SE to the abandoned airport symbol west of Ferguson Field and which, oddly enough, is NOT a functional airport in MSFS. It also looks quite interesting in Bing, as it was once a huge circle of pavement half a mile in diameter with some straight runways sticking out of it. IOW, it actually looks like the abandoned airfield symbol on sectionals

However, we never quite got there.

See, as we neared the coast, we spotted another player close enough to intercept, one BREKFASTMACHINE. 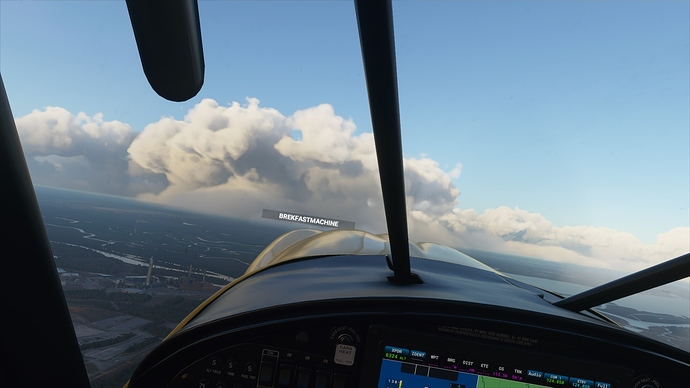 We figured, we were in a group so BREKFASTMACHINE would never even know we were there, so no actual harassment done. Still, it would have been funny if he HAD seen us, and didn’t have our X-Cub liveries, so saw thought he was being chased by a couple of “Moonanzas”

Anyway, despite PROBABLY not even knowing we were there, BREKFASTMACHINE still seemed to be doing evasive maneuvers and making strategic use of pause and slew. Or maybe he was glitching out. I mean, he was in a 172, faster than our X-Cubs, so could have just out-run us.

Regardless, CuzDawg3 played with the weather again to add some clouds, making the pursuit more challenging. The initial interception led us over a post-apocalyptic power plant before the interception was made. 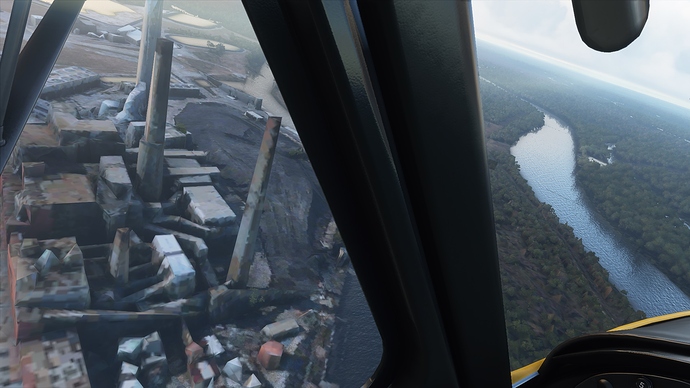 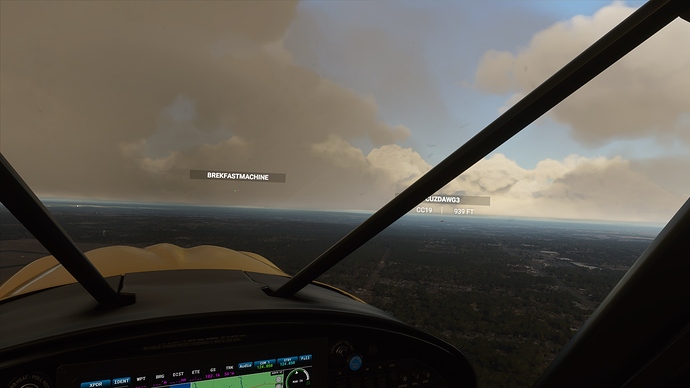 And then it was a long, fun chase (due to our quarry’s glitching and/or evasives) through the clouds as the sun began to set. The pursuit led generally NW towards Mobile. 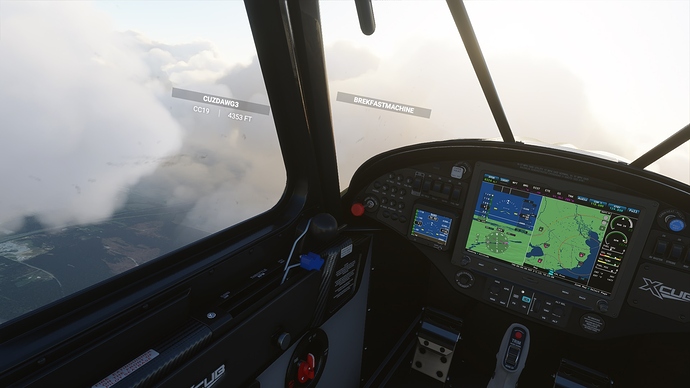 Eventually, however, BREKFASTMACHINE went into a dive and disappeared, so we thought he’d overstressed his plane. But then he reappeared 30 seconds later much higher and miles away, so maybe we didn’t kill him after all.

By now it was getting late, there was no chance of catching up with BREKFASTMACHINE, and nobody else around to bother. We were over I-10 just east of Mobile. Below, Alabama Highway 181 crossed I-10 on a big bridge with large shopping centers surrounding the intersection. So we decided to land on the bridge and call it a night. Cuzdawg3 crashed but I managed to do it.

But my triumph soon turned to horror as I took a look at my surroundings. The intersection was surrounded on all sides by Stonehenge-looking rocks (should be trees) and all the buildings and cars were melted and skewed. Even the bridge I was parked on seemed pretty sketchy. Surely, I had landed in Zombietown. 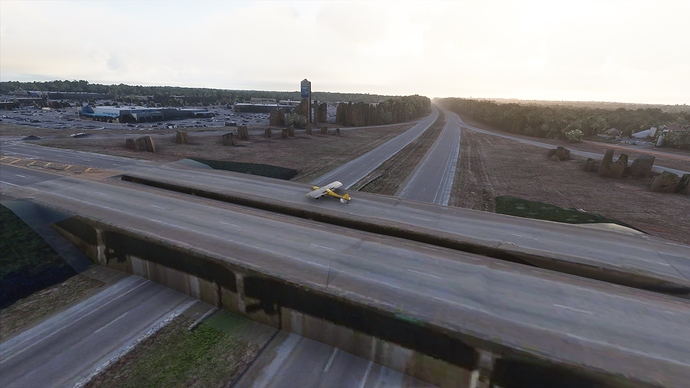 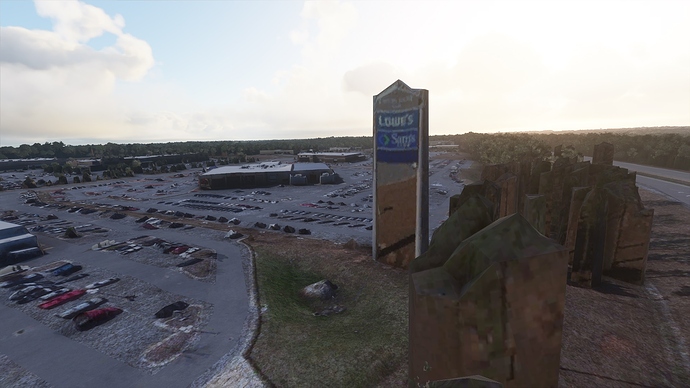 Oddly enough, however, there really are both a Sam’s and a Lowes here. So kudos to Blackshark for getting the sign right. Even if it looks zombified. That might just be my crappy bandwidth, though.

Anyway, another fun evening with CuzDawg3.

That was a fun adventure! I miss the beta days of a dedicated screenshot thread to clog up, but this is good too. Here’s a few of my shots from the evening adventure. We would have taken Viruses, but my sim was acting weird: first stuck in the endless “press any key to continue” loop. @OrigBullethead kept saying “it won’t work because there is no ‘any’ key!” He’s right. That and apparently the fix is to log out and back in to Microsoft store and/or Xbox gaming. Before I was privy to that detail, I clicked the “more settings” on the sim link and “reset” the game. Doh! It did get me past the pause screen, but tried to start reinstalling the sim, and since I didn’t change the path to my dedicated sim drive, it messed things up. Then I lost all my super duper deluxe premium airplanes. No virus or shock ultras for us this evening. (That took a reinstall, but most probably because I corrupted the sim locations and cut short an attempted reinstall.) Needless to say, back up and running. And on to some pics:

“Moonanza!” or “Bonooney!” Take your pick. It is funny to see the generics flying around with gear down.

I had live weather on, but for some reason it wasn’t showing to Bullethead in our group.

This guy was especially shady, with a high performance propfan parked at the end of an abandoned airfield near the gulf. . .

I should have droned to get the landing, but Bullethead did have the winning “closest to the pin” landing. Distance was without the “high performance option” of using parking breaks at touchdown.

Sorry, I blocked him with the support strut.

I did a quick quit and restart to see if it would add in my deluxe-o planes, but no joy. In the meantime, I added the same Xcub skins too. Here’s the gratuitous sunset shot, with my new orange cub.

I had to find BH to see if my perception of BH was corrected. Sure enough, it did.

I typically turn off nameplates since it is, IMO, the worst offender to kill realism. . .especially with other pilots pulling antics like us out there.

But here is us chasing after the breakfastmachine:

I didn’t get any other good pics. Until next time!

I’m a big fan of the Moonanza.

The first time I saw it in the simulator I couldn’t figure out if it was a Mooney or a Bonanza, never thought of Moonanza though. That’s a good name for it.

That was a fun adventure!

As always. Hell, last week was fun, too, trying to stay on your wing as we roared along Fort Walton Beach in RMVFR (Really Marginal) thanks to Hurricane Marco. Too bad the cat had literally gotten my tongue

Well, it depends on the genders of the parents. It’s like If you breed a jackass (male donkey) with a mare (female horse), you get a mule. If you breed a stallion (male horse) with a jenny (female donkey), you get a hinny, which is physically and mentally different from a mule. So I figure the Moonanza is from a male Mooney and a female Bonanza, and a Bonooney is from a male Bonanza and a female Mooney

Strange thing is, though, from a pilot’s perspective, they look like X-cubs inside

Here’s what looks like an abandoned Nike/Ajax missile site

Wow, I totally missed that. But I think you’re spot on with the identification.

I typically turn off nameplates since it is, IMO, the worst offender to kill realism. .

UNLESS you’re more interested in entertainment than realism. And I’m telling you, some of the names out there are HILARIOUS! In a combat sim, you see warrior names meant to be intimidating or self-inspiring. So not really funny unless the person is totally inept, and even then it’s more ironic and sad than funny. But here, it’s amazing what some–nay, MANY–folks decided to call themselves. Quite a few are “unemployable” in the same way as folks with facial tattoos in Western culture. You’ll never get a job at a Virtual Airline with a name like TOX1CFARTS, whom I actually encountered over Puerto Rico last week

I’m a big fan of the Moonanza.

The first time I saw it in the simulator I couldn’t figure out if it was a Mooney or a Bonanza, never thought of Moonanza though. That’s a good name for it.

Most of these planes you see are probably the mule-analog, the Moonanza. I figure, as with equine hinnies, breeding Bonooneys is less likely to succeed not as useful. But there are a few around