This is not a huge deal to me, but I wanted to bring it up because I thought it was interesting. Now maybe if I lived in Rockford Michigan and these trails were covering my house, this might be a big deal. I also noticed that the jet that produced the trails is in the image.

Perhaps someone could figure out how to “Erase” these from the image before they apply them to the sim. 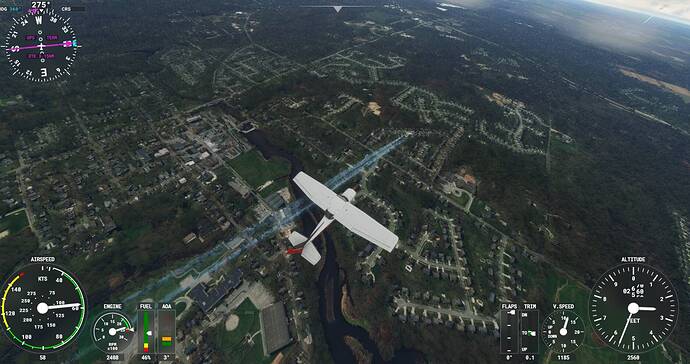 I’d say report this to Zendesk. It’s just a coincidence that the Bing Maps satellite/aerial photo that the sim uses just happens to have the jet and contrails taken with it.

It’s impossible to go through each and every photo for the whole world to QA, even the AI is only good enough to detect Airports and some building/terrain. Even so it’s only good enough, and not really perfect for the job.

These artifacts might get slipped through the QA, so it’s best to report them so they can take a look at the map and make some manual adjustments to it. But you need to be detailed in the description, like a GPS coordinate would help them fix it.

I understand what you are saying Neo. I know it’s impossible to catch everything, but if you zoom the world map on Southwest Michigan just North of Grand Rapids Michigan, it’s pretty hard to miss.

It’s really not a big deal to me. There are other things that need to be fixed in the sim that are way more important than this.

but if you zoom the world map on Southwest Michigan just North of Grand Rapids Michigan, it’s pretty hard to miss.

Yeah, but you’ll have to be specific to zoom in that area to find it. Asobo is a French company and Blackshark AI is Austrian. So while it’s easy for you to notice, that’s probably because you’re already familiar with the area. Since MSFS is practically a European product, and me who doesn’t know where Michigan really is since I’m not an American myself. It’s highly unlikely that these things do get noticed unless you’re actively looking for it.

I’m sure there’s other that needs to be fixed, but at least if you report this to Zendesk, it goes to their backlog to revisit whenever that is. Without it, they won’t know there’s an issue and they won’t even have any plan to fix it.

What’s interesting is that the jet and the contrails doesn’t seem to appear in Bing Maps. Perhaps Bing Maps is using an updated satellite photo that came after the initial photo was used for MSFS development. Then this should be an easier fix, since all they need is to reuse the current satellite photo from Bing, then run it through Blackshark AI again and apply it to the next update. But to do that, you still need to report them, otherwise, they won’t know there’s an issue. 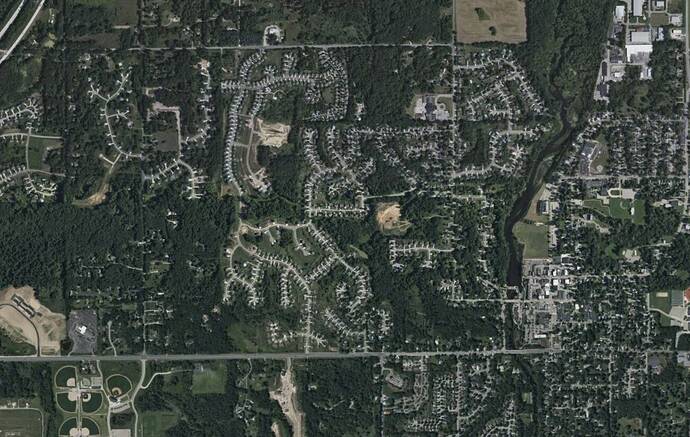 Hmmm, that is interesting that Bing seems to be more updated than the world map in the sim.