Having an issue with my xbox controller causing planes to constantly roll right, happens on all aircraft types. I’ve gone through the sensitivity menu and adjusted the deadzone so that the normal amount of joystick drift shouldn’t affect the controls.

Oddly enough, in both the sensitivity menu and while looking at the controller profile under primary flight controls, the movement bar for ailerons doesn’t budge in the drift zone. However while flying in cockpit view I can see the stick/yoke move while moving the joystick through that ‘drift’ zone (and verified it affects the roll too)

forgot to add a screenshot, just shows my deadzone settings 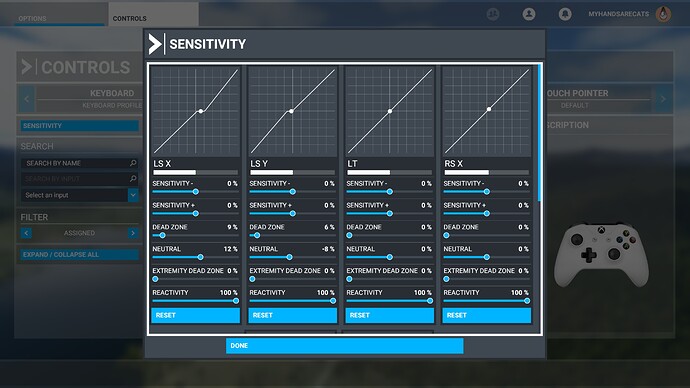 Figured it out, there’s a weird binding issue with the xbox controller. On my LS X axis I set my neutral point of the deadzone at +12%, since the graph showed that’s where it was. However it seems to invert the actual settings on aircraft. I set the neutral to -12%, so it appears to be WAY off on the graph but it works perfectly on the plane, no more roll. Pic below shows the resting position for the LS and how the neutral setting for the deadzone is now. Looks backwards but it works on the plane.

I also noticed I had an issue with the external camera controls with the right stick. Although the RS binding is tilt left to look left/right to look right, it works inverted when playing. I had to set the stick controls backwards for them to work correctly (there’s no option for inverting the controls on the external camera afaik).

Picture showing new deadzone settings. It looks way off, but it works perfectly while flying. 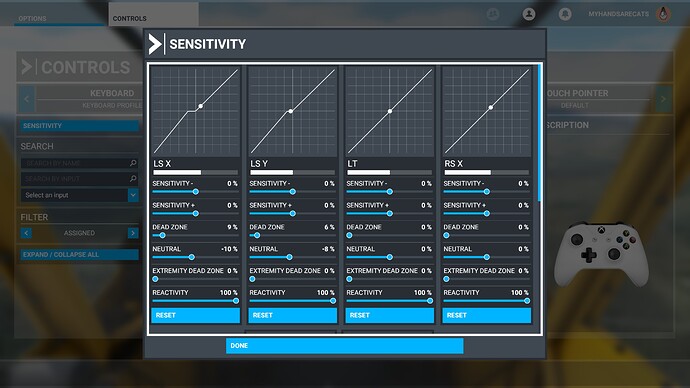 Weird. It may still be a good idea to report this to Zendesk, the calibration menus should give you the correct readings.

Submitted to Zendesk, hopefully it’s a simple fix. May try reinstalling the game next to see if that fixes it. I don’t see anyone else using an XBOX controller with the same issues.

I have this same problem ( Using wireless Xbox game pad ) the planes move to the right non stop just as you described , ill try your fix out and report back

If you already have a deadzone set, go into cockpit view and watch your yoke while you slowly move the LS left to right. You should be able to see where the deadzone is actually located and make your adjustments using that, not the sensitivity graph.

I see you changed the ‘neutral’ setting. This basically tells the sim where the middle (0 point) of the axis is.

Did you do this on purpose? If nothing is wrong with your controller, this should be at 0%.

I changed it on purpose, for some reason FS2020 recognizes that point as the neutral and not 0%.

I’ve used the controller on my xbox without any issues, only happens for FS. Do you think I would need to to download some sort of controller driver to calibrate it on PC?

This worked perfectly for my Gaming pad Thank you

I’ve just noticed if you log out the game it doesn’t save ! kinda sucks.

Thanks so much for suggesting this. I was having the same problem with my Saitek yoke and this fixed the issue so I can fly level with minimal inputs. Like your setup, the yoke is calibrated through Windows and looks stable there. It also looks stable on the controls screen but was inducing a right roll in flight.

I’ve noticed that if I turn on my controller just as I open the game (in steam), it’ll usually remember the controller settings. If I turn it on after the game is running and is loaded to the main menu, my presets wont be loaded. Restarting the game sometimes works.

So the controller settings are saved somewhere, they just don’t always load into the game.