Cranking up that RX 6900 XT in SteamVR for Valve Index

Hello everyone, after fiddling around for quite a while, I guess it is time to share my current settings with you.

I tried to find a good balance between having a decent quality but not sacrificing too many fps for that and getting some good clarity out of the image. I also still get occasional CTDs, though they used to be much more often than now. I ~guess~ the closer you get to the limit of what your GPU can achieve, the more likely it is to get a CTD due to either the driver running into a timeout or that funny VCRUNTIME140.dll ruining your party.

I am playing with a Valve Index and therefore use SteamVR, so I decided to share those settings as well. In terms of performance, depending on the situation (large cities like London, New York or Paris still hurt), I am ending up with ~30 to 48 fps, which I find quite decent, given that I have set super sampling in SteamVR to 150%.

So here are my settings (sorry for the screenshots being in German): 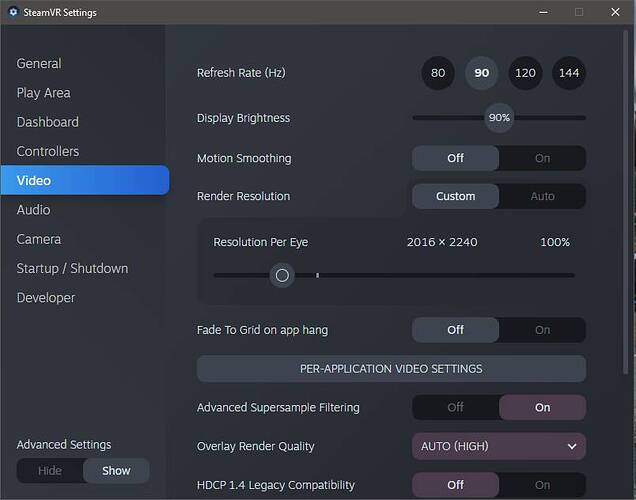 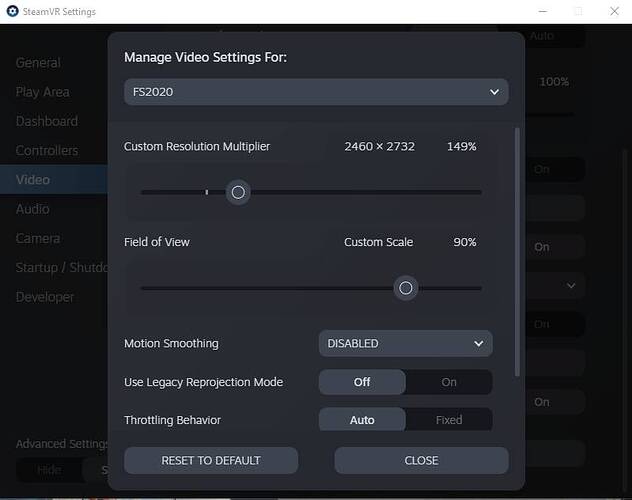 Side note: The latest SteamVR beta features a FOV slider. What it basically does is reducing the FOV you get ingame but therefore increasing the image clarity. I wouldn’t suggest getting below 85% on the Index, because then you would start to see where the image has been truncated, however I didn’t notice as much of a difference in terms of clarity between 90% and 85% so I went with 90%, which definitely gave me some sharper instruments compared to before (100%).

Please feel free to share any potential improvements, you might find or let me know how these settings worked out for you.

Just another finding, looks like I have to give up on the theory that the CTDs appear when the gpu is maxed out. I just had another VCRUNTIME140.dll related crash, while the GPU was “only” at 87% load.

Hi,
I also have problems in VR with my RX 6900 XT and CTDs. Could not even complete one flight in VR due to VCRuntime140.dll errors. Works ok in 2d… DCS and X-Plane work fine in VR. Seems to be a MSFS issue.
The CTDs happen with both my Valve Index as well as with my Pimax 8kx.
Wish that Asobo and/or AMD would come up with a solution concerning AMD cards and VR in MSFS.

I was getting these from an overly aggressive OC on my GPU. Lowering it fixed it for me.

I managed to do a full flight from Frankfurt/Main to London Stansted in a A320 neo. It didn’t crash at all, even though I had very bad performance drops in the cockpit (strangely only there) over the Calais area.

Update: After doing some more tests and improvements, I have changed the settings as follows:
SteamVR: Oversampling to 200%, Enabled TAA and set Render Scale in FS to 100%.

The whole thing DID cost me about 10 fps, so as of now I am down to 30%, however these are very constant and it is still playable, while providing a very good clarity.

On other news I played around with setting less voltage to the chip and reducing max frequency slightly with no noticeable degrade of performance, however the whole thing running cooler, drawing less power and NO CTD!