yup…also crashing with black screen,pc freezing witn no CTR ALT DEL working and needed reboot.Randomly but i think it has to do with other apps running along the mfs ( i use bandicam,movavi video editor,replay addon etc) and i have 32 gigs of ddr4 and an 6800xt nitro plus.
No other game does anything wrong.
No stress test has ever proven anything wrong.
This is messed up !

Just west of KECG, we have a wind mill farm. Pretty well represented too. So, those objects, for me, cause no CTD as I’ve flown over/past them on many occasion with no issue.

For whatever reason it seems a bit more stable in the last couple of days as I hadn’t had a single crash while entering main menu or returning back to it. A couple of 40-minute flights with C152 with lots of back and forth between MSFS and Windows (Little Navmap etc), were 100% successful. I had a couple of hiccups in the latest flight with huge framedrops for 5-10" while preparing the aircraft for taxiing, but other than that it went very smoothly.

I’ve no idea why yesterday it kept crashing with CJ4 WT 10-20 minutes into the flight. Let’s see what happens today when/if they release the new huge update. Also in a few hours I’ll hopefully receive Honeycomb Bravo after 4 months of waiting for Aerosoft (6 if you count the original cancelled Amazon order), which will complete the Honeycomb set. I should be excited but I’m not, because unless MSFS gets stable on my system there’s no point in investing additional time to setup up yokes, buttons, radio panels and throttle quadrants.

I have exactly the same problem… I posted this in another thread as well but…
I updated everything, Content Manager stuff, even my GPU Driver and my entire PC and it still won’t work…

I was flying pretty well and all of a sudden I lost connection and it told me “You have outdated content, do you want to update it and return to main screen?” or something, I presses “No” because I was in the middle of a flight…and the only thing that happened was that the same window popped up again…and again…and again…and…you know what happened next by now…
anyways, I hit yes because of frustraion and i was put into the “Press Any Key To Start” Screen…and after pressing a key, you might already know what happened…exactly, back at the “Press any blablabla” screen…and again and again…

I just did the IFR flight (I don’t have Navigraph) from Barcelona to Ibiza with the TB 930, I didn’t have a CTD.
I did all the taxiing, to the parking lot, with the engines off.

You didn’t say what error you had in the Event Viewer.

I was wrong, in fact the guy is talking about an area that causes CTD next to a wind farm

For my part also, I have much less CTD, I am still on the Windows that I call N ° 1 the one on which, it was impossible for me to fly more than 10 minutes without CTD.

Since I uninstalled Microsoft Visual C ++ (without reinstallation), I have only had 3 CTDs with the vcruntime140.dll error, but each time on the same flight zone, or at least at the end of the same flight time.

I just did 3 hours of VFR flights doing a zigzag circuit to cover as much area as possible, still no CTD

So far, since uninstalling Microsoft Visual C ++ (Without reinstalling), I have been able to do a total of 15 hours of flight time, and I haven’t had a CTD.

On the other hand, I always have the impression of being on the razor’s edge, and that at any time, I can have a CTD.
I hardly dare to alternate between interior and exterior views. I was thinking of buying a Thrustmaster T.16000M FCS type joystick, or something. Or why not, do something to me in 3D printing, but for the moment, I will do more, with the Xbox One controller.

I’m thinking of one thing, I don’t know if it’s ever happened to you, to launch a flight with an airplane with G1000 or G3000 screens and have the screens turned off. You have to go back to the main menu, restart the flight, to have the screens on.

This weekend, while I was flying the Corsair, I realized that I didn’t have any working trim. Neither with the buttons on the joystick, nor by turning the dials on the plane. Earlier, I flew the Corsair, and all the trims were working.
So just like from time to time, there are the G1000 or G3000 which do not launch, there was also this problem of trim less visible than a screen off, which did not work, there must be files of the game that does not launch. Or as I said above, something happens, when these files which are on RAM, should go to virtual memory to avoid conflicts. Either they don’t switch from RAM to virtual memory, or the other way around.

I am thinking that perhaps ASOBO might consider changing their recommended “minimum” requirements and making them a little more specific.

It certainly appears like not all “minimum” requirements systems are the same.

This is a reminder to keep the topic on CTD (Crash to Desktop) and not on each other. Please remember that we all are here as we share the same passion and to treat each other with respect.

All these CTD topics are of interest to the developers. This specific topic as been pushed up to the team. The more that can be reported on how to duplicate; the better. Zendesk is important in this as you can upload crash dumps. Give all the details you can provide.

Hello guys, I was a little absent from the topic, to those who have been discussing in the past, any changes, do the CTDs still persist?

My Fs2020 is causing CTDs during taxiing for takeoff or after 10-20 minutes after takeoff, I am always taking off from the international airport of guarulhos to anyone who is interested.

Tomorrow I will do the test without addon

@Gsx31 update me of your experiences after the last update, what has changed? the problem persists, did you perform any configuration on your machine?

WU4 released yesterday so I gave it a try, albeit not as extensive as I would like to (mainly due to superslow download speeds as it’d rarely go over 6-7 Mbps).

Didn’t have a CTD with C152, the same with C172 G1000 but most importantly I also didn’t have any issues with CJ4 WT (which threw a CTD every single time I tried it in the last week). Flew around 20-30 minutes with each, almost always the CTDs happen before that but I’ve also seen one in CJ4 after 2 hours.

Can’t verify if it’s WU4 alone, because in the meantime a few more things got updated as well (from Windows 10 KB5001330 yesterday to a few MS Store apps). After all WU4 didn’t include any anti-CTD improvements in its changelog. I’ll try a full 2-hour flight today with CJ4 WT with all apps running (LNM, Navigraph, vPilot etc).

ps: however I should note that CJ4’s performance was a bit lacking, as there was some random heavy stutering at some points plus average fps were significantly worse compared to C152 despite lowering display refresh rate to Low (a known workaround for CJ4). I’ll do more tests later but for me the important part is that I didn’t have a CTD. Hopefully it’ll stay this way.

@Zeppos are you flying with AI traffic on or off?

About 1h into a flight, FS2020 just quits. No error messages - just straight out to windows.
Flying with FSUIP7 so I can connect my Ipad to the sim.

Anyone els having issues?

AI traffic has been off for several months now (way before my CTDs began), first because my old PC setup couldn’t handle this due to performance impact, second because it allegedly causes CTDs (so for some reason some people in the community find it an acceptable solution to disable one of the most marketed features of the sim) and most importantly because ever since I was introduced to VATSIM, I don’t want to fly offline.

Just had a CTD, roughly 1.5 hours into the flight, was around 50nm away from EHAM.
AI/real traffic is off, only multiplayer (and ground aircraft) enabled. Had a lot of other multiplayer aircraft around me the whole time (group flight).
All the time no issues whatsoever before the CTD. Did not touch the sim at all since I was flying on AP on a straight route. Did not use ATC on the flight.

Had monitoring running, no spikes in temperature or anything.
Such CTDs started for me with SU3, it seems to happen when getting closer to major airports (had this happen approaching EDDF as well).

Here’s where the CTD happened with a distance measure from EHAM: 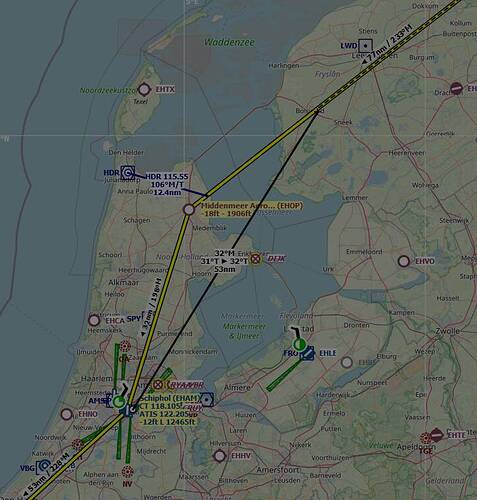 I guess I’ll disable ground aircraft entirely to make sure their loading doesn’t cause the issues. Other than that I have no idea what could be the reason.

Had a similar CTD with 1.14.6.0 when approaching EDDF (same settings as stated above).

In the upper red circle I had the CTD (heading south). When retrying the flight all went well.
On the way back I checked at which distance the sim generates the ground aircraft flying the same altitude (red circle around aircraft icon) and I noticed that it’s the same distance I got the CTD on the first flight (blue arrows).

It’s just a hint, but I think there might be some issue with aircraft model loading.
We already had other bugs caused by AI aircraft models in October or so (which caused some weird camera bug) and also there were already issues with AI traffic that did not properly despawn. Such effects would explain why it is usually happening some time into the flight and not at spawn.
Also it would explain the difference if people are affected or not since the ground aircraft slider is probably set different for each of us.
Will now fly without ground aircraft to see if that helps… 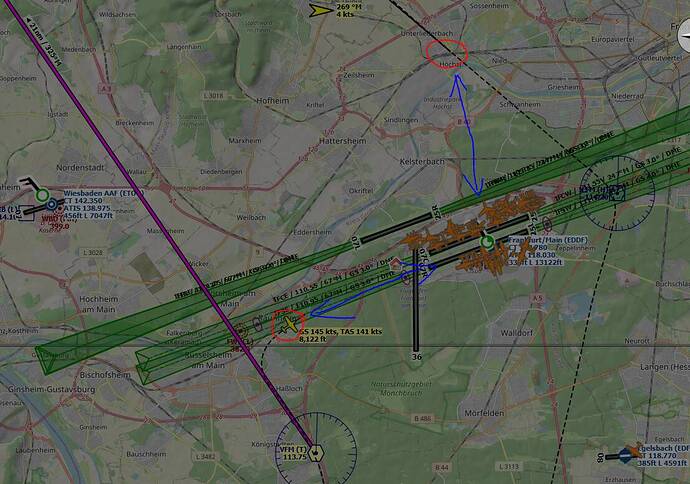 disable one of the most marketed features of the sim

would like ask about your pagefile setting ( windows virtual memory ).

Setting on “system managed” is very often the reason and needs a manully increasment:

Nope. At high settings this sim is incapable of keeping stability with 16GB of committable memory or less. If you add another 16GB of virtual memory on top of your 16GB of physical for a total of 32GB committable, the crashes become temporary freezes or stutters instead. While less than idea, at least the application is able to run indefinitely. Alternatively you could lower settings until the memory requirement for prolonged use falls below the 16GB limit but that takes a bit more testing than…

Have you used slew / time acceration ?