DATA am I doing something wrong?

Hi People!
Scenery is a bit jerky. The photogrammetry over London looks like London in the Blitz. Buildings are such a mess. Just wondering if the image shows I’ve set this up wrong. The 58.77Gbs shown never changes or resets. Have set the cache to 300Gb. Any help with this would be nice. Thanks. 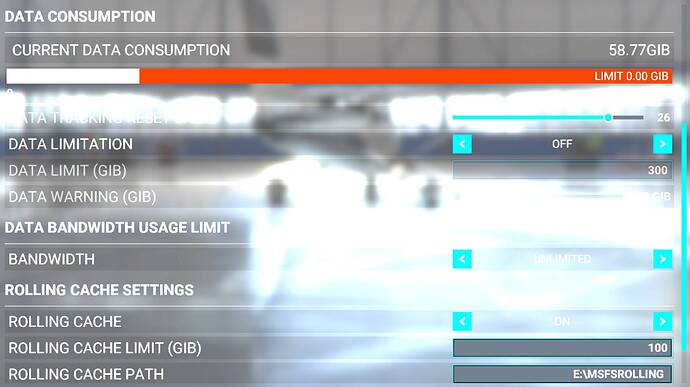 Not sure why the current data consumption isn’t changing but you haven’t got a 300GB cache set there, you have 100GB.
The 300 value you have is in the Data Limit box which stops you from using more than 300GB of data, although you do have the data limitation set to off so it shouldn’t be restricting you.
What’s your internet connection like? I’m sometimes pulling over 100MBps when flying over London with photogrammetry on.

as @XTCQuinn wrote you made possible wrong settings.

You should not set a data limit if you not realy need it because of your internet-contract. This settings can cause lots of other trouble !

Then a 100GIG Rolling Cache file is far more what you need and can cause performance issues. Recommendation is max 30Gig or simple disable it if you have high-speed internet and you not allways fly over the same area.

And the update notes mention that you have to reset these cache after the update. Same in case you use manual cache.

As others stated, remove any settings for data limits if your provider doesn’t have any. And your rolling cache is WAY too big and probably giving you issues. 16-32GB is plenty. What kind of internet speeds are you showing when you do a speed test?

UPDATE: Just noticed your memory, you should really try to upgrade to 32GB ram. I’m under 16GB most of the time, but if I get near a city I see my memory easily go up to 18-24GB. You are probably swapping like crazy and that’s causing the stuttering.

Thanks for your replies.

Still don’t understand why the data usage never changes. Thought this was the problem. The photogrammetry probably only works in the future, say a 5080Ti