Hi. Trying to get to grips with this plane.
I recently started a flight from the Faroe Island to The Shetlands.

Once I was as my altitude I switched AFE to cruise.

After around 150miles engines started shutting down and the stress engine screen on the EFB had X through each engine. Why!
I did have anti ice on for the carbs and prop.

I also started cruise manually but couldn’t get CHT out of yellow so switched to AFE. Ten mins after is when the engines started to shut down.
Confused.

Out of fuel? Out of oil? BEar in mind that the aircraft will be in the same state as you left it, even after a sim restart unless you do some work.

I’m using the plane with OnAir so always check my fuel at flight start. Having said that OnAir gave me a resume option and stated my fuel should be just 305lbs so I think I may have screwed up as I thought started with over 22000lbs for. 220nm flight.

For now I think you’re right. No fuel 🤦🏻

I did have anti ice on for the carbs and prop.

You should only ever use carb heat / carburetor de-ice when you are experiencing drops in manifold pressure. Carburetors work best with cold air, so even if you are seeing blue on the engine state page on the tablet, that doesn’t mean you need to do anything about your carburetors. If you were experiencing a drop in manifold pressure combined with visible moisture (which would suggest carb ice), then you would start by increasing the carb heat. Only if that didn’t work would you use the carburetor de-ice. The latter involves shooting alcohol down the throat of the carburetor, so if you leave it on too long you will eventually run out of fluid. Likely, if you were encountering carburetor icing that bad, you would be in severe icing and would need to get out of it anyway.

Also, you need to pay attention to the cylinder head temperatures, oil temperature and oil pressure. If you run the engines too hot and hard, or you shock cool them, they can break. If you are using the AFE, that stuff will generally be managed (and the oil pressure on the tablet will often show yellow when it is just fine).

I think I may have screwed up as I thought started with over 22000lbs for. 220nm flight.

For now I think you’re right. No fuel 🤦🏻

Seems unlikely since you started with way too much fuel rather than not enough. When you have fuel in your auxiliary tanks, you do have to manage that, but for a 220nm flight you would have had plenty in the mains. Have you been topping off your oil in the maintenance page before flying? Each flight will burn quite a bit of oil and if you don’t top up every time, your otherwise new engines will eventually break from the abuse. It doesn’t take too many hours to burn through enough oil such that the engines are no longer adequately lubricated.

My engine 4 seems to be running a bit hot … nothing catastrophic so far, but probably need to check the oil quantity at the next FBO I visit.

thanks everyone. It could have been an oil issue. Now flying from Rotterdam to Paederborn.

Use AFE for takeoff, but then decided to manage all cruise settings myself after reading what manifold, etc should be. So far looking good!! 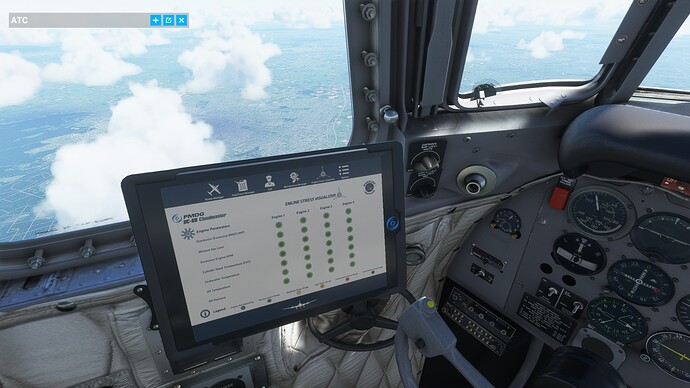 Just got to manage to land the thing. More failures than success so far. Seem to be either coming in too fast or stalling.

Sim needs a more in-depth “Crash Status Page”. Sure it will happen down the line.

You crashed as a result of flying into a building…

You crashed as a result of running out of fuel…

The R2800 can (and will) use as much as one gallon per hour in normal operation.

Check your engine gauges often. The big radials get hot quickly when manifold pressure exceeds 35” and rpm is above 2400. Once you set cruise power they cool off quickly too, especially at altitude. Remember to close your cowl flaps down to 0 degrees once you’re established at cruise power and altitude. Don’t forget to set mixture to Auto Lean too.

It’s fun to monitor everything, and once you have a routine it becomes second nature. At some point you can let the Flight Engineer go back in the passenger cabin to help pour coffee!

I’ve managed 2 perfect flights now. I watched what Doug the AFE set everything to and wrote that all down. Then discovered the mixture lock 🤦🏻 So no longer get too lean warning on landing

Thanks for all input!

Carb heat is actually used as a prevention to keep the carburators warm when flying into visible moisture. Loosing MP already means that there is ice and this requires the de-ice system.

I’m using the plane with OnAir so always check my fuel at flight start. Having said that OnAir gave me a resume option and stated my fuel should be just 305lbs so I think I may have screwed up as I thought started with over 22000lbs for. 220nm flight.

Don’t go by OnAir regarding the fuel. It’s very likely that it can’t even read the fuel system of the DC-6 as it’s custom coded and overrides the MSFS fuel system several times per second. 300 pounds sounds more like the taxi fuel ^^ 22000 pounds is no problem, all it will need is more runway and higher speeds. Keep in mind that in times of the DC6 fuel was not always available at every airport and it isn’t today either where she flies so taking a good load in the tanks is normal in the DC6. Keep in mind the magic number of eight-seven-six though. 87600lbs of gross weight (and more) and you need to use full manifold pressure and hence water injection cooling as standard procedure.

The R2800 can (and will) use as much as one gallon per hour in normal operation.

lol yep, those radial engine airliners where range limited rather by the quantity of their oil tanks than the fuel tanks

If you tell us a bit more and in (technical

Not much point… Leave it alone for awhile and things may improve or not!

Ephedrine is a medication and stimulant. It is often used to prevent low blood pressure during spinal anesthesia. It has also been used for asthma, narcolepsy, and obesity but is not the preferred treatment. It is of unclear benefit in nasal congestion. It can be taken by mouth or by injection into a muscle, vein, or just under the skin. Onset with intravenous use is fast, while injection into a muscle can take 20 minutes, and by mouth can take an hour for effect. When given by Common side effec...

Carb heat is actually used as a prevention to keep the carburators warm when flying into visible moisture. Loosing MP already means that there is ice and this requires the de-ice system.

The conditions in which carburetor icing can occur encompass more than visible moisture and visible moisture alone isn’t sufficient for carburetor icing. In any case, radial engines are apparently handled a bit differently because they need super cold air for best performance. Rob Randazzo’s advice (based on 10 years experience flying radials) is not to touch the carb heat unless and until a drop in manifold pressure is experienced. This seems like sound advice to me since the build up of carburetor ice isn’t likely to be so fast that it can’t be dealt with if and when it occurs. I’d rather keep the engines performing at their peak than run around with the carburetor heat turned on to prevent icing that might not even happen.

Here is what Rob said in one of his posts on the PMDG forum:

I can see how you are getting confused.

This is described in some detail in the documentation, but let me give you a simplified rundown in hopes it will help you understand it in a way that will help you operate:

The best thing you can give carbs is super cold air. Super cold air is highly dense, and reduces the amount of work that must be done to compress the fuel air charge. You will generally only find this at very cold temperatures found at high altitude.

When the visualizer is blue, you don’t have a problem. It is merely advising you to keep an eye on engine performance because you are in a temperature range that is conducive to carburetor icing. If you have those indications of icing, then add a tiny bit of carb heat to eliminate the indication of trouble. It is important to point out here that you generally only use carb heat with radial engines under extreme icing conditions in the climb or moderate indications in cruise. It’s use is actually quite rare and you should follow the guidance provided in the FOM in that regard.

You shouldn’t provide carb heat unless there is a compelling reason to do so- and a “blue dot” isn’t compelling unless accompanied by a loss of power affiliated with icing.

The POH does talk about using carburetor heat to prevent the formation of ice in icing conditions, but the rub is that carburetor icing can occur on a warm, sunny day if the humidity is high enough. I read this to say that icing conditions are identified by a drop in manifold pressure that occurs when carburetor temperatures are within icing range.

Under extremely cold ambient air conditions, applications of carburetor heat
may cause the formation of ice in the induction system as a result of bringing
the carburetor intake temperature upward within the icing range.

Do not take-off or land with carburetor heat applied.

The emergency procedures and troubleshooting section of the POH is a bit clearer and it notes that the application of carburetor heat as soon as a manifold pressure drop is experienced is generally sufficient to deice the carburetor. Alcohol is only needed if that doesn’t work.

I only switched it on as the stress page had carbs in grey which says it’s potential icing conditions. I also watched PMDG video on icing and he talks about free air temp between -10 and +10 if I recall. All good info though and I’ll just monitor as I fly. I also notice my anti ice fluid was empty at one point