Surely we can move on by now.

The thing is that this post/request is based on pure speculation… we have tons of actual concrete stuff right now to deal with lol.

Hey I’m with you man, as someone already said: “Release it when it’s ready”.

My reply was based on your statement, that “Asobo never confirmed that Dx12 would even come to Fs2020” which is objectively speaking false. That’s all I said. It was confirmed multiple times.

It was confirmed multiple times.

Asobo has said so in a statement? Or is this all based on it being added to the wishlist?

Edit: because it being added to the wishlist is not confirmation. It’s called a wishlist for a reason.

Really? So we now have a ‘please go back to su4’ topic as well as a ‘don’t update the sim’ topic.

This game has never ever needed an update more then now ffs.

And to be honest, you don’t need that new of a gpu to suppert dx12. You can’t ask for a game developer to stop a features that only benefit higher end systems. They build games for the present & future. Not for the past.

It’s the high end systems in this case that suffers the most (as i believe reading this forum). People with lower end systems seem to be genuinely happy with the improved fps.

So, pleasy hurry with a new update. We need to be able to benefit from this new optimizations instead of playing a game designed for low spec pc’s & consoles.

Asobo has said so in a statement?

Multiple times. You should try watching some of the Q&A sessions. It was on the dev roadmap for “summer 2021” many months, which was likely intended to be SU5 and with the Xbox release (it’s already on DX12). But my guess is that they didn’t get it done in time. Likely SU6 inSeptember will see DX12. 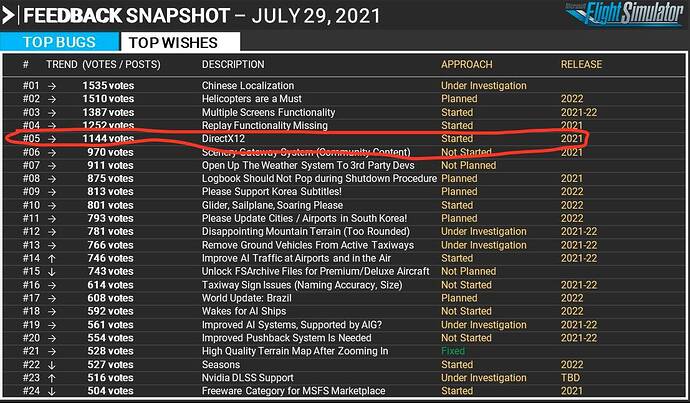 PS: This isn’t the “wishlist”. This is the actual dev roadmap of what IS coming.

Ok, they say they’ve started it. So I guess thats as close of a confirmation I can get on that. Going back to op though, nothing indicates SU 6.

Yes they have. Watch the Q&A’s and read the link I sent you before. Dx12 is being worked on. There’s no way around this one.

Prior to this latest version of the roadmap, they had it slated as “SUMMER 2021” in all caps. Likely it was due for SU5 but got pushed back due to not being ready.

Watch some of the past Q&As if you want detail. They’ve outright stated multiple times in multiple Q&A sessions that DX12 is coming this year. It’s not a ‘maybe’ thing. It’s for sure so they can really unify both the PC and Xbox platforms on 1 common code base.

That said, SU5 wasn’t ready either, but they had to push that out the door unfinished because of the Xbox launch.

I’m glad they’re going for DX12. A game I’ve played for the last 9 years has just announced they’re updating the engine, to DX11…

Really, DX12 has been out long enough now, and will future proof this sim for PCs in 3-5 years time.

Well seeing as they currently seem to be running behind, I’m guessing it will get pushed back as well. Either way whether its SU6,7 is irrelevant. I dont agree that it should be scrapped all together.

Some games will let you choose between DX11 and DX12

Same. Personally, I’m glad they didn’t rush that one out the door. People seem convinced that DX12 is some magic dust that makes everything better, faster, better looking, etc. Most people screaming for it aren’t programmers and have no idea what they’re talking about.

It will benefit us in the long run, but it’s best if Asobo take their time and get it right and not deliver us flaming excreta like they did with SU5. Hell, even the Xbox version is buggier than week old road kill, full of failures to load, crashes, and all the same in-game bugs we’re seeing on PC.

Thats what scared me the most. When I started watching an xbox stream on day one and they were having all kinds of issues, most of all crashes. Like if they released it on console like that then YIKES.

I think those Xbox players just need to empty their community folders or update their drivers. It can’t be the sim. It has to be a problem on their end.

Asobo, please continue on course with dx12, as this will be integral to hopefully more efficient rendering.

Sure, it is bound to muck up some stuff, but will ultimately be a win.

lol, that or make sure they weren’t running antivirus in the bg

Why do some have many issues when the rest of us, despite some bugs, can run the sim just fine? Legit question. I’m a PC user

I have no idea why that’s the case. For the last year, it was easy to blame end users, their mods, their hardware, their drivers, etc (in some cases, that DEFINITELY was the issue). And boy, did people EVER blame the end user and their hardware, refusing to believe the software was the issue.

But Xbox users are experiencing the exact same bugs we are on PC. You can’t blame the community folder, because there isn’t one. And you can’t blame different hardware configs, because all Xboxes are the same. But here we are seeing both platforms suffering from the same stability issues and outright failure of being able to load the sim up at all without a crash.

Hardware differences. PC users have thousands of different combinations. Then you’ve got driver differences. The list is a long one…