This is not fixed.

Can only add fuel with the slider and not by entering the amounts. I received a message saying this bug will be pushed to the next sim update.

It might be worth repeating that with an empty/renamed Community folder. It’s possible it is triggered by out of data mods. I’ve just seen both the 530 & 750 GPS mods just got updated, for example.

If you do not see the fix in the release notes, it’s not in SU10.

Well regardless of resolution … % slider now gone … SU10 with DLSS has reduced my performance by 25 percent.

No change if DLSS quality is changed.

Doesn’t matter. You won’t see any difference since Asobo/MSFS do not have the optimization activated on this update release.

Please note that our new memory allocator for DX12 on PC will only be activated for Nvidia graphic card users once the next driver is available (will improve performance). Other graphic cards already benefit from the new allocator.

Hmm, I understood this in the way that the allocator will be activated automatically when a new driver is present on the system. But you could understand it both ways…

Still saying Beta next to DX12 too …

DX12 is in beta; it will remain in beta for quite some time.

Hmm, I understood this in the way that the allocator will be activated automatically when a new driver is present on the system. But you could understand it both ways…

I would have thought impossible. They said they removed the optimisation from the beta after the first build. And then said the release version was the same as the final beta build. Therefore, the optimisations cannot be in there surely?

Unlike TAA, there is no scaling factor % slider in DLSS.
It is adjusted in the NVIDIA DLSS section. 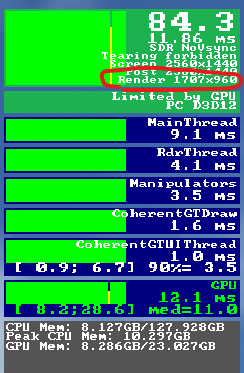 I lost a huge amount of fps compared to the Beta

Had you left the beta early? I ask, because the release version was the last beta.

Hopefully that’s the case and we don’t have to wait further after that.

It would be better if Nvidia called “studio” drivers “stable” drivers, because that is what they are. They are more throughly tested and less likely to contain bugs than the latest cutting edge “game ready” driver.

The release notes say the memory manager will be activated once an updated driver is released by Nvidia. It’s not clear if the 517.40 studio driver triggers this or we have to wait for the GRD

Can confirm when enabled, DLSS takes away cca 10 frames down. At least.

or we have to wait for the GRD

Or if we have to wait for another version of the executable. AKA a patch.

I think it means, that Asobo will activate it (read update) once the game ready drives are released.

If it was able to be triggered by drivers, they could never have put in the first beta because the drivers weren’t available then.