Exactly the same thing I did, and I guess I got lucky as well and have had zero issues so far.

Do you have any overclocks going? Including RAM? Remember, using an XMP profile is an overclock.

Are you sure your Community folder is completely empty? Have you triple checked?

What are your specs? How about memory? In my observations, less than 32GB of total physical RAM in your system (well, in anyone’s system) can be problematic. That doesn’t mean there aren’t people running with just 16GB, there are, but it doesn’t seem to want to work for everybody.

What about background apps, got any of those going? Especially the 26 apps MS/Asobo has labeled as “habitual offenders”? These include Discord, MSI Afterburner, and several other apps almost all of us use, but apparently they can misbehave from time to time.

Do you even know what I am talking about?

For, me, the update happened is roughly 6-7 minutes, not including all the “free” stuff from the Marketplace for WU6. I don’t know exactly how long that took, because I wasn’t paying attention, but not long. 5, 10 minutes max.

I’ve run a number of flights today, mostly in the modified version of the DA62, and haven’t run into any issues, no CTDs, no strange behavior, no broken mods (though I’d bet both legs I have some of those and haven’t noticed yet), nothing bad at all.

I have formed an opinion, after months of reading about these issues, and hundreds if thousands of anecdotes that in most cases, people experiencing large problems have something going on with their computer, not the code as written by Asobo. There are some of those to be sure, but I think they’re very much in the minority. It can be easy, like the overclocks, or problem-child mods. Or it could be a bear to track down, like a RAM module that isn’t thermal pasted properly, or a power supply that works fine with everything else, but has degraded just enough to cause issues with MSFS. Another alternative that would be “not your peecee” would be network issues, whether or not it’s in your control to do something about.

But if you can eliminate the connectivity as being at fault, chances are if you were to run out and purchase a shiny new PC, assuming you got quality products from quality companies, SSDs only (at least for Windows and all MSFS and MSFS related files), a robust Internet connection, say a wired 10MBPS, or Wifi-6, I’d bet that new peecee would run it just fine, like most other folks. Which means it’s time to start exploring what it is about your computer that is causing your issues.

Of course, I say all this without even the slightest hint as to what your issues actually are, so I cannot completely discount the idea that I’m full of it, and wrong about virtually everything I said. But it’s on you to start playing detective and figure out what the heck is going on, because the app you’ve been bashing is working quite well, with some known issues that will be addressed soon enough, for most of the rest of us.

Heck, I’m willing to try to help you if I can, and if I can find the time, but I’m gonna need a lot more info before even knowing where to begin. But if you’re interested in that help, my offer to try is sincere. No promises. And there are many others here who have the same attitude I do about trying to help people, so even if it turns out I’m just too busy, I’m quite sure if you ask nice, you’ll find a line of people ready, willing, and able to assist.

I agree…after several hours of doing everything over and over again, the running of the Xbox app was the turning point for me…all now good, and MSFS running as it should.
Thanks for all your inputs.

logical, expected, they need to sit out …

Hi all, We have two delays to announce tonight. Due to an unexpected Out of Office from one of the members of our Dev Q&A stream, we unfortunately have to postpone the live Dev Q&A to a later date. We will provide more info on this shortly. As announced previously, we are introducing a new series called Local Legends: historic aircraft that coincide with World Updates. Today, World Update VI: Germany, Austria, Switzerland, was released and the plane to go with it, Junkers JU-52, was set to rel…

Same here, also installed the xbox app, I have no idea why I would need it, I’m on PC. But I did and have restarted the OC, signed out of and back into the Microsoft store and still no update. Why is this so ■■■■ hard?

Didn’t bother them before when Seb or Martial couldn’t join.

Might be waiting for some of the other Q&A questions to overtake the top voted ones. Some difficult questions there.

The timing of the postponement of the Q&A is interesting. A cynic would say it’s possibly to do with the amount of flack they’re getting with these increasingly error-strewn updates…

I’m not going to tell you I fully understand how it works,

Yeah, I can tell so stop posting nonsense. Your monitor cannot and will not ever display a resolution higher than its native resolution. If you believe otherwise, you can’t be taken seriously.

Absolutely regarding the postponement regarding the Junkers. Completely logical. Therefor, I wonder why these Sim/World updates are rushed (although this world update was also delayed) to the stores, full of bugs. So there is some testing/bug finding process, how come they didnt find the bugs, introduced (or even in several updates already) by the updates they are releasing?

Here the same. Can’t use the simulation. The following window appears during loading. 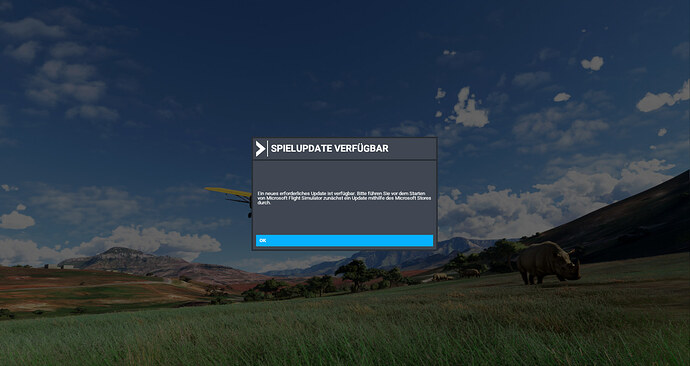 After clicking OK, I am directed to the Microsoft Store, but there is no update for the MSFS to be found here, in any case I am not offered an update. Is there a way to get this update without starting MSFS? In this forum it is recommended to select MSFS in the MS Store and then choose Update. But I can’t find this option in the store. Step by step instructions might help me.

I find it highly entertaining that you tell others to stop posting nonsense, while not understanding the concept of supersampling that multiple people have explained to you, so it seems like you don’t know how it works as well. Nobody is saying that the monitor is displaying a resolution higher than the native resolution. The program renders an image at 200% the resolution (or whatever you set your render scaling to), and then downscales it to fit your monitor at its native resolution.

For example, this post below that was directed towards you.

You are wrong, at least in the super sampling part in games, it makes a difference in visual quality. This is for a different engine, but the principle is the same, check at the bottom of the page: Temporal Antialiasing and Supersampling - Lumberyard User Guide " Controlling Supersampling In addition to antialiasing, Lumberyard supports supersampling for very high quality rendering. Supersampling renders the scene at a higher resolution and downscales the image to obtain smooth and stable edge…

Maybe they’re just out of their depth with a project of this size and complexity.

One more take at explaining this:

When the GPU has rendered the image at 200% render scaling it has all those generated pixels available to it. It cannot just send them all to the monitor since the monitor’s native resolution is too low to show all the pixels, just as you say. But the GPU can use all that additional pixel information to create a more visually pleasing image at your monitor’s native resolution than it could if it had not rendered all those extra pixels. The algorithms for how best to do that are not at all trivial, but it can be done, and the results are good.

So the end result on your monitor is not more pixels, obviously, but better values for each pixel that result in a better looking picture.

So the end result on your monitor is not more pixels, obviously, but better values for each pixel that result in a better looking picture

I find it highly entertaining that you tell others to stop posting nonsense, while not understanding the concept of supersampling that multiple people have explained to you, so it seems like you don’t know how it works as well.

You wanted to know why to set it above 100%, supersampling is your answer.

That’s it, that’s all there is to it. Other’s have said the exact same thing, and gave you the exact same answer, yet you refuse to believe it. At this point I’m led to believe that you’re just trolling, I’m done trying to explain it to you.

They were out of their depth a year ago, They’re fully in the weeds now well over their head.

I agree. What you fail to understand is that the final scaled image is no different than the resolution you are playing at. Super sampling works if you are running the game at lower than your monitor’s native resolution then going over 100%. For example, your monitor is a 4K monitor and you run the game at 2K. If you then set the render scaling at 200%, you might as well run the game in 4K to begin with and use 100% render scaling. If you don’t get this concept, I’m done with this debate as you are free to believe what you want.