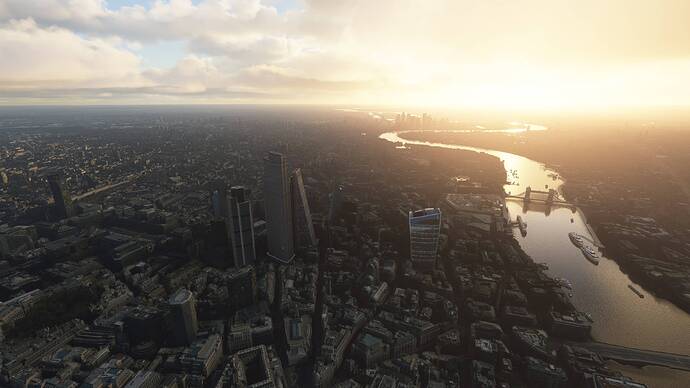 Yeah I’d been begging DD dev to put EGGP on the marketplace. Eventually they did, but few weeks before they did, Mr. Jorg announced on live stream that he will make EGGP and give it to us for free. Hence I didn’t buy DD’s version right away, and decided to wait for UK world update three.

Well today is world update three so at first I checked out Microsoft’s EGGP. Looks absolutely stunning from head to toe. You can’t really find flaws with it, yet you might find some if you are like really really hardcore-nit-picking, like if you used a magnifying glass or something. To give you an idea of how silly it could be, go near the flight school Merseyflight and you will see that the school’s name is printed but not the phone numbers and website. DD’s version has it all. So…is Microsoft EGGP a deal breaker? Absolutely not.

This default EGGP goes even outside the airport a bit and puts in some POIs, such as the Hotel and yellow submarine. However DD’s version goes even more and puts in way more POIs that go way beyond the airport. So basically, for someone who only cares about the airport itself and POIs outside the immediate vicinity, Microsoft EGGP is absolutely perfect. But for someone who’s looking for the ultimate deal and ultimate level of details, DD’s version is absolutely “study level”.

and today I bought DD’s EGGP and uninstalled Microsoft’s. Both have a place and customer base in the MSFS sim universe.

Great update, downloaded and installed, not even a CTD…You guys are doing an excellent job! Thanks from one who is insidethewalls .

I’m getting screen flicker that I never had before.

Is anyone else experiencing very broken flight dynamics after this update, specifically the TBM and C208? No mods, community empty. Full details here, watch the video and you’ll see exactly what I mean…

I don’t know what’s happened in World Update 3 but the physics seem to be all over the place. I’ve only thoroughly tested the C208 and the TBM so far, but they are taking off at crazy low speeds. Landing them is extremely hard, they’re floating along above the ground at speeds they should be stalling at. Here’s a video of the TBM at St Barts. As you can see from the gauges, I’m pretty much throttle idle all the time. Not only does it float the whole way down the runway at throttle idle, it can …

Landmarks shifting up and down + Half of them not loading correctly (still not fixed in 1.12.13.0) Scenery

How can asobo miss this…? This is just beyond comprehension.

Yup. Landing speed below 40 kts in the TBM.
Looks like they overdid the ground effect “a little”.

If you do that with a G-sync enabled monitor you just killed your Frame Rate and your locked at 60MHZ. Trust me I’ve tried.

Oh no! That’s terrible to hear! The TBM was SO on point…

Yeah, it’s pretty awful… really pulls you out of immersion. Last 2 legs of that Bush Trip I was landing at like… 45 knots. Gonna go do another Bush Trip now and see how some of the other birds fare, but this is NOT good.

I feel like everyone is just talking about the scenery, and I get it… That’s the focus of the update, but for me… the scenery is great and all, but this just kills any kind of realism of flying. I feel like I need to cleanse my palate and go fly some A2A aircraft in P3D in a bit.

Just so unfortunate. I hope they will fix this next time around. Sim Update should be later this month, I believe.

Yeah, this one is a tough pill to swallow.

me! I had to turn on Vsync to get rid of it.

What was this update supposed to do, scenery wise? I just flew over Herne Bay in Kent and it looks neater, but still looks nothing like the real thing. Also I noticed vehicles randomly drive forward and backwards about 10 yards at warp speed.

You guys have out done yourselves! England is spectacular! Really enjoyed flying from London to Liverpool, scenery was awesome! I can abandon VR for a while to take advantage of low and slow scenery.

After updating today, Portsmouth has gone from being easily recognisable to a landscape of generic buildings! Only the Spinnaker Tower has seen any improvement.
To rectify this I’ve had to uninstall two parts of the update -

This has returned the city to how it was.

I’ve no idea what’s going on. I’ve tried various connotations of the updates, rebooting the PC between each change but the only thing that got rid of the generic building was to uninstall those two updates.

It looks like the update has broken taxi light placement at any airport which uses standard light row features. As a result many of our payware airports now have taxi lights incorrectly strewn about (where prior to the update, they were properly placed). The speculation–which seems like a good place to start the investigation–is that the new “snap to” feature for light rows is probably the culprit. This is a pretty severe regression and it makes the partner scenery developers look bad. I would hope that this is addressed by issuing a hotfix that pulls the offending code.

King Air is similar, took off the first time after the update and it just lifted itself off the runway. Then landing it, it just floats like crazy. Very different than before the update. I’m not a real world pilot but I can’t imagine these aircraft behaviors are realistic

I haven’t even dared to touch other aircraft… but I tested the TBM a little more, stall speed is 40 kts or a little less, and stall itself has only a slightly increased sink rate… until you apply full power, then it resembles a helicopter.

Oh dear. Welcome to the Arcades.