DX12 - Getting very low FPS when freelooking around (Limited by Rdrthread)

My sim always been running great, and I fly daily. Today I updated like everyone else to Sim Update 10, and when I’m on DX12, my FPS drops to minimal (5-12ish) when looking around (Freelook) and FPS raises when I stop.

Using the DEV mode I can see that I get a rdrthread limitation (No Cpu or Gpu limitation).

I reverted to DX11 and it’s back to normal FPS, slight drop from 55 to 44 fps drop when looking around which is expected.

Happens on multiple aircraft, not only one. 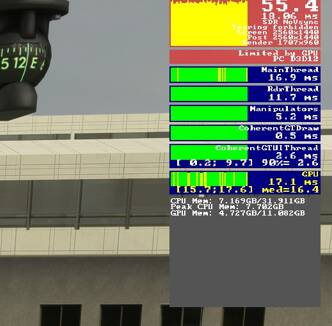 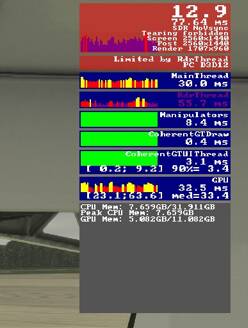 Definitely not just you… It’s also hard to truly verify this on “launch day” as things NEVER work smoothly on the first day of a release.

Ok thank you, glad to know - I’m eager to get the Nvidia driver update and see if that helps.

Same issue here. Even though I have the off screen terrain pre-caching on Ultra, I still get stuttering when looking around in cockpit and outside.

You just raised my curiosity with this graphic setting. I switched it from High to Ultra and it does help my FPS drops, although I still get a stuttering, while having less big of fps drops. Thanks for this !

Bizarrely enough, the NVIDIA performance / fps overlay is the cause of this problem on my setup. Turning that off makes the next flight (not the current one) smooth again.

Before I installed the newest studio driver my DX12 experience was the same with high rdrthread times of 10 to 16 with constant spikes into the 50’s. After install of the new driver my rdrthread stays way below 10 now and near perfect experience everywhere except on or close to ground level at major hubs like KORD,klax,katl. I still get some stuttering there with Tlod over 140 or so. Everywhere else I use Tlod of 190+. R5800x3d or R5900x (I have both that I test after each update). Also 2080 super. Those airport stutters happen to me on DX11 as well. Always have for 2 yrs. Note I quit using GeForce experience app 6 months ago as it gave me a performance hit.

Got the same issue but in VR (maybe because in VR you are always in some sort of freelooking mode). I made a comparison between DX12 and DX11, all other settings stay the same: 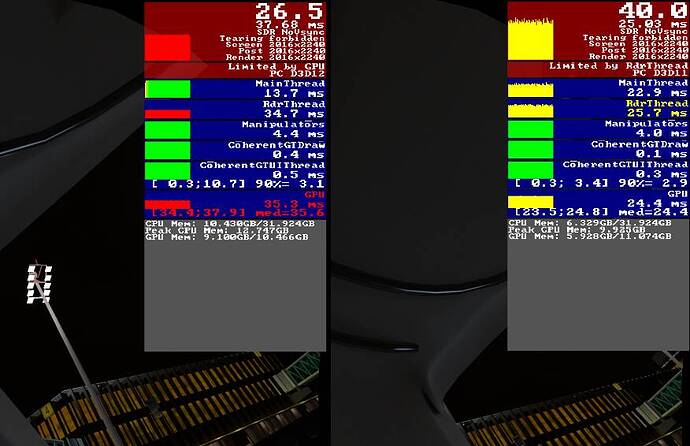 The screenshots are taken with TAA but it doesn’t matter if I change it to DLSS, it just bumps it up 1-2ms.
Funny enough, if I keep the camera in VR perfectly still, the RdRThread frametime goes down by at least 10ms to a level similar to the performance of DX11 (following the theory, that it might be something about the camera mode, then it might be a temporary disabled freelooking mode due to no VR camera movement?)