Probably not too many people from Wales here but I just landed at Caernarfon (EGCK) and was surprised to see a tower there even though there was no tower frequency. However, there is a tower listed in the facilities.

I did some digging and there is a tower there, but it looks like a WWII era military tower. In the sim it looks modern. Anyone know any details?

Landed there myself yesterday from EGBB

I did some digging and there is a tower there, but it looks like a WWII era military tower. In the sim it looks modern. Anyone know any details?

Probably a library default… Orbx has made some scenery in the past… You mean this tower ? 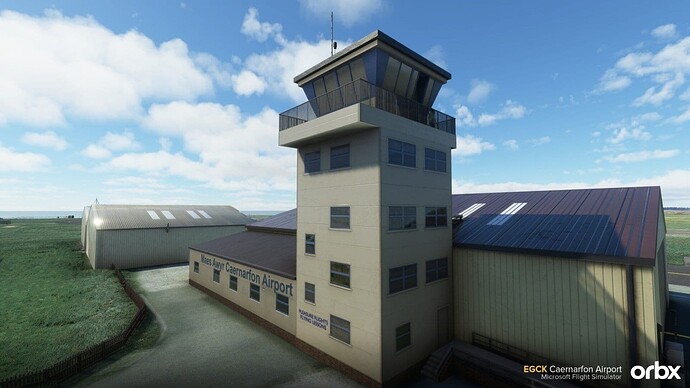 Yes, it’s there IRL, just no tower frequency. I read somewhere the WWII era tower was recently replaced, which fits with the default SIM render.

Air Traffic at Caernarfon was upgraded, I believe when the HM Coastguard and N Wales Air Ambulance moved there (and the Big Yellow Choppers got chopped) a few years back. I haven’t actually visited the airport for several years but I did, just a couple of weeks ago, take a photograph from the other side of the Straits, pretty close to Aber Menai Point, and the new tower is visible; you can see it on Google Earth too. I did a bit of research myself and it seems that there is an air traffic service from EGCK between 09.00 - 16.00. I guess after that most of the GA traffic is on the ground and the emergency services will work with something like Manchester Centre.

Living on Ynys Mon BTW. I have the ORBX EGCK scenery which is quite realistic - apart from the fact that the cows haven’t moved in 6 months and the guy carrying out maintenance on the coastguard aircraft hasn’t finished the job yet.

the guy carrying out maintenance on the coastguard aircraft hasn’t finished the job yet.

That’s realistic for Wales, no?
(Don’t flame me!

Hi @Michail71. I moved your post here to the #self-service:scenery category and added the “airports” tag for searchability.

My local airport IRL and I often fly from here in the sim too.

Snowdonia (or Eryri in Welsh) is a beautiful place both in the sim and real life.

You guys are lucky to live around there! I love all those
green open spaces and mountains. Being from the US I’m astounded by how small the UK is. I’ve always know that but actually sim flying around puts it in perspective.

It’s interesting they left the tower frequency off in the sim.

When passing through Iceland I noticed I was getting towers even though I didn’t always see them at airports.

My local airport IRL and I often fly from here in the sim too.

Snowdonia (or Eryri in Welsh) is a beautiful place both in the sim and real life.

Just hopped over to EGCB in Manchester. Same deal going on there, tower and no frequency. It’s the weirdest airport I think I’ve seen in the sim so far! Even has a playground.

It’s pretty much across the board - in the North of the UK anyway. EGCN (Carlisle Lake District) is a pretty busy regional airport and a hub for a major UK freight company (Eddie Stobart) and that has no ATC response. Wait until you get into Scotland - it’s like someone has declared a radio silent zone.

Across to the antipodes and I fly quite a lot in New Zealand, which is absolutely awesome - like Canada condensed - but again the silence is deafening.

I started in South Florida, then Canada, Greenland, Iceland, and then worked my way down through Scotland and Ireland. After flying around my home airport for so long I came to love the radio silence! No more non-stop “expedite your climbs”! Although I think that was fixed. I just wish there was regional accents. I’m surprised that’s not available given it’s cloud computed speech.

I was surprised by how similar Northern UK looks to Iceland and Greenland. I’m also still in shock at how small Western Europe is. You can reach nearly all of it in the range of a piston engine airplane.

An epic journey to be sure. Some of the more obscure grass strips in Ireland are really hard to find, there is one on the northern tip of Co Donegal (I think Payne from memory) was particularly hard to locate. The thing that I found most annoying was arriving at these out of the way places and finding ground lighting on poles and flashing beacons on top of some weird, tall red and white pylon structure. Totally bizarre. Spent an enjoyable month flying around the whole country though. Scotland, a country that I know quite well, is also fun.

What aircraft did you use for the journey?

I’m using the Bonanza G36. Yesterday I did Cambridge to Oxford. Then over to Bristol and around Portishead since I’m a fan of the music scene from there. All such short hops!

Something else I noticed with airports in England is a number of them have grass parking and taxiways. I thought the sim was bugged at first.