Do you have any add-ons in your Community folder? If yes, please remove and retest before posting.
Same with mods installed or not.

Are you using Developer Mode or made changes in it?
None

Brief description of the issue:
Applying a STAR at the destination airport corrupts the perfectly fine SID route from the departing airport 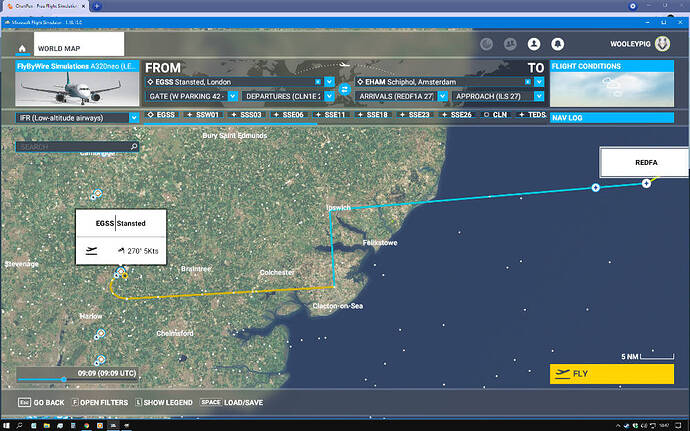 Plan flight from EGSS RWY22 to EHAM RWY27, apply CLN1E SID and the route looks fine. Go to EHAM pick ILS 27 (EGSS SID still looks fine), Pick the REDFA1A STAR for EHAM transition and the EGSS SID is also dramatically changed. two pics added above, the first shows application of the SID, the second shows what happens to the SID route after applying the REDFA1A STAR for EHAM.

Build Version # when you first started experiencing this issue:
World Update 5 - Hotfix 1.18.15.0 installed - No further updates showing as required in the update manager.

Did you submit this to Zendesk? If so, what is your ticket #?
Zendesk ?..No !

You can just delete the waypoint above Ipswich to make the flight plan look like the one above.

Hi Neo,
Tried that, right clicked it and chose delete but it just stays there !

Then you delete it on the FMC/MCDU once you start the flight.

Definitely submit as a bug…you shouldn’t have to go in an fiddle with the FMC to remove waypoints that you deleted from the world map screen unless you just want to use the FMC to build a flight plan in the first place.

Neo,
I’ll try that next time I get a chance, never even entered my mind, but, I agree with FortNova, it’s obviously a bug of some kind for a STAR to modify a SID.