Electricity shut down during flight for propeller plane

After recent up-grading, the electricity will shut down during flight for all propeller planes. It can only resume after using the AI co-pilot mode. How to fix it? 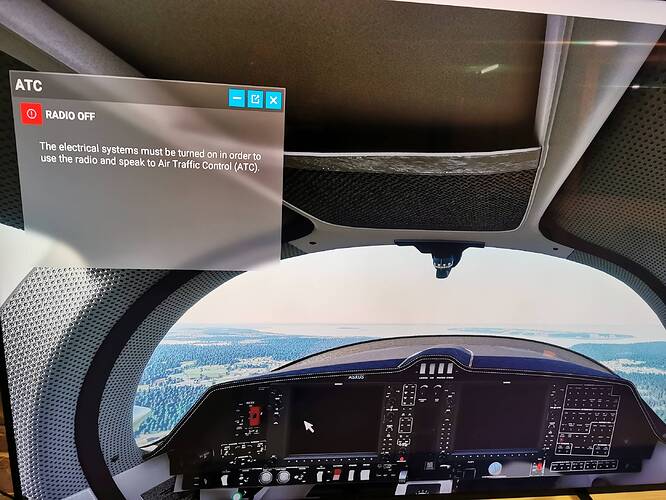 Your alternator switches look like they are off, it is a little hard to tell from that image. If so then yes, the battery will go flat.

Where is the alternator switches? I did not touch any button before and after taking off

I’m flying prop planes exclusively, made probably 5-6 flights since last update, none suffered from electric loss. As said above, check alternators. If not sure where the switch is, open checklist and find it there, click an eye and the game will show it to you

I have the same problem like this one, and same also not switched on or off anything after take off.

Also confirmed the alternator switches are ON, and even switch those off and ON again, all the system can be resumed.

Anyone can provide the solution for resolving this

Happening to me also, avionics switch off but come on momentarily, only started happening after flaps update.

Something I have noticed is that the key controlling the magnetos (OFF/L/R/BOTH/START) is constantly moving forward and backward, like if it falied to engage a stable position and continuosly tried to. Is anybody experiencing this? Can it be related to the problem we are having?

And has anybody found a solution for the disconnections? Thanks!

Same problem
Any answer to the problem ?

Yes, that’s the cause. If your starter is on, it will drain the battery. The alternators are trying to recharge them, which is why you’re seeing the flickering.
I can be caused by some yokes/controllers with a hardware ‘key’ for magneto’s / start.

having the same problem. 152 switching the Alt switch when the power shuts off brings the power back on line for a short while. but looses again even though the alt switch is on. Defo think its a program problem. need looking at.

Anyone found a solution to this problem? I am having the same issue. After a while, all panels turn off.