External fuel tanks on the F4U

Anyone know how to get rid of those pesky external fuel tanks on the 3rd party plane the F4U??? Man they must be causing some serious parasitic drag.
I looked all over in the setup menu but there isn’t an option.

Set the fuel in those tanks to 0%

Bugs & Issues is for stock sim defects only.

Man o man I thought I tried that. I’ll give it another go when I can and see if I did it wrong or something. Thanks!

Before flight: you set the external tanks to 0. You won’t spawn with them.

After spawn: Along with the fuel toolbar menu item, you can also click on the map tray (bottom of instrument panel) and select loadout from the two item list on the left. Uncheck what you don’t want loaded.

I’m just curious as to where you got this…

NOTE: Edited my original response to clarify why I made the post, and to not understate the options of your product in any way.

This was the first thing I also wanted to figure out when I bought the Corsair from the Marketplace. My first 15 minutes with the product was trying to figure how to do exactly what the original poster had asked, and that was with the information I already had from watching most of the YouTube reviews prior to my purchase - I waited for the Marketplace release. One of the YouTube videos might have mentioned it, but I couldn’t recall it. I also might have seen it posted in the Release Thread, but I didn’t want to search the huge thread for the info.

Page 15 of the manual shows the TacPack loadout screens. I wondered how to get to that screen knowing that TacPack couldn’t be included in my Marketplace version. My secondary desire for some form of psudo GPS in the cockpit led me to actually find and use the chart tray shown on Page 19 of the manual. When I saw the loadout page, I was overjoyed. I didn’t care that it didn’t include any weapons, as most Corsairs [except the C] don’t have any barrel protrusions on the wings. I can’t overlook this on other Warbirds, and I’ll likely purchase them directly from the developers for historical accuracy. Regimes that want to alter and attempt control historical facts have been associated with governments that control through fear, violence, and domination. It’s one of the reasons weapon systems like the Corsair exist in the first place.

Since MSFS defaults to 50% in all fuel tanks, I had already spawned with the exterior tanks showing my first time out. Unselecting all the external tanks from the loadout tray got rid of them. I thought and said to myself…“OMG Thank you MilViz for including this option”. I only wished the information was clearly stated on Page 14, so I didn’t have to spend time on my first flight figuring it out on the ramp.

It’s probably easier to just use the fuel menu from the toolbar after spawn, but I thought I’d offer the second method that also works. I prefer using that option. I always feel like I’m cheating myself somehow when I use the in-game toolbar. The map/loadout tray (as part of the cockpit - albeit a compromise itself) somehow seems less intrusive to me, and it might be for others.

BTW: Thank you for the superb Audio representation of the R2800. After I landed and parked on the ramp, the last 30 minutes of my first flight with the product (and several flights after) was just listening to motor while I did other things near my computer.

"The only Corsair that we have as a payware in MFS,is the FG1D and it has all the options to unload tanks and weapons very easily"

And??? The question was how…Not whether it could be done or not. Thanks so much…

OK…So that worked and the tanks went away. But now, only about 30% of the time. I empty them in the loadout but they are still there more often than not. Plus…I set them to zero and for reasons I cannot explain, after 3 or 4 seconds, it reset to default loadout all on it’s own. I can watch it chance back to the original settings and I’m not touching anything. I guess I’ll have to make a track to show you but I think it’s a glitch. Hmm…

Yes. This is another reason why I use the cockpit loadout tray. The external tanks stay removed from the model when you use the tray. Once you spawn, the game glitches quite often to 50% fuel if you access the fuel toolbar assist after you spawn (from whatever you set previously in the pre-flight planning screen - sometimes disregarding any setting and just giving you 50% fuel at spawn with external tanks anyway). I haven’t noticed that the game changes the fuel and reverts to 50% without having the fuel menu open after initial spawn though. It is another reason I don’t like to use the toolbar.

Recommendation: Set your fuel and loadout after spawn from the fuel toolbar menu on the ramp after you spawn. Use the cockpit loadout tray to remove external tanks (imagine that you have a magical “hot refuel” ground crew that can remove the tanks and set your fuel in 5 minutes). Then, refrain from accessing the fuel toolbar menu assist item for the remainder of your flight.

Yes. This is another reason why I use the cockpit loadout tray. The external tanks stay removed from the model when you use the tray.

Lol…What in the holy He!! are you talking about “in the loadout tray”?? I have a “Weight, and Fuel” window which is essentially a “loadout tray”. Is that what you are talking about? The reason I am so confused by your response is that on my “Weight and fuel” section, there is no way to remove the tanks. There is no option to remove them. Not only on mine but there are a number of Youtube videos about this issue and that there is no way to remove them. It was never an option according to others who own the module on Youtube. So if you have another tab somewhere called the loadout tray that I don’t know how to access…Man -O- man would that be great…So??? Please say that you have one…

You must be on Xbox. It’s why I tagged my initial response with “PC Version”. Sorry, your original post was tagged with PC.

On the PC, there is a Map and Loadout Tray. It is accessed by clicking the bottom edge of the instrument panel. I also didn’t realize it was a bug for some people and they couldn’t access it.

This might be why some people don’t see anything on the tray. I never had an issue with removing or keeping the external tanks removed after using the Tray, so I never looked online for a solution.

Here’s Page 11 of their Updated Manual that explains where and what it is on the PC: 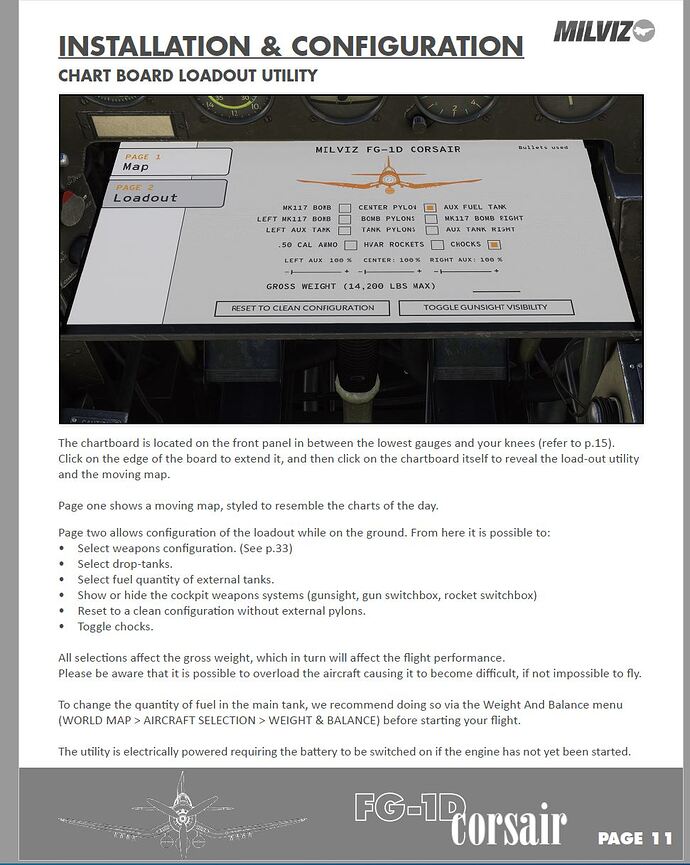