Every time I do a high G maneuver with the F-18 at the moment the vapor visual effects appear my fps goes down. This does not occur with any other effects such as dust or contrail that appear on other planes. It only happens with the F-18 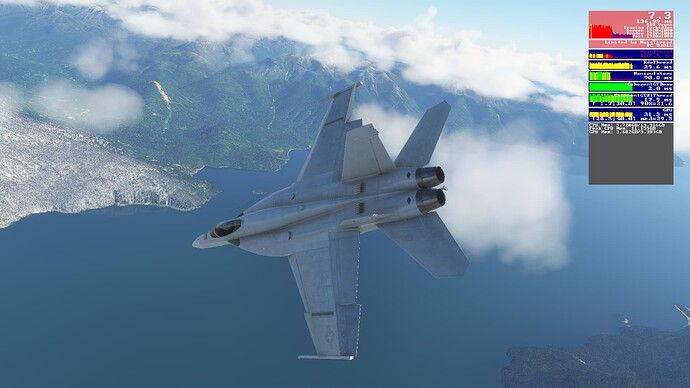 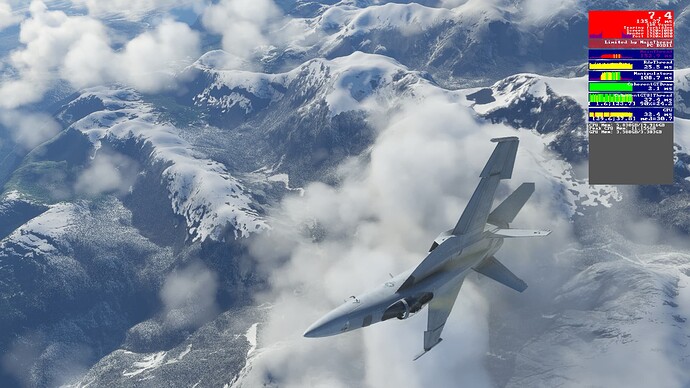 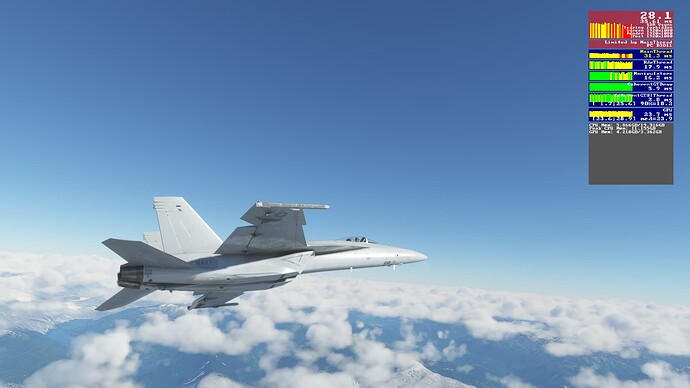 Yes
Provide extra information to complete the original description of the issue:

Contrary to the original report this issue does affect other aircraft. The SU-57 and the Mig Fulcrum (both by Deimos) also have this issue. I get a drop from 60ish to approx. 14 FPS with all 3 of these aircraft.

DC/SC Designs aircraft F15/F16 do not have this problem.

In addition it should be noted that the vortex effects do not need to be onscreen for the FPS to drop, sitting in the cockpit and doing a high G manouvre will cause the same drop in FPS.

Like @Spook1234567890 mentioned, this happens as well in cockpit view where the new f18 visual effect is not even rendered, so likely not a GPU-side problem, more like CPU side.

https://www.reddit.com/r/flightsim/comments/ud3j0i/new_f18_visual_effects_destroy_fps_in_sim_update_9/?sort=new Someone reported the same issue on reddit as well.

DC Designs and SC Designs have just updated the F-14 and F-16 respectively to include the new effects. Unfortunately both of these aircraft now show the same behaviour as the F/A-18. Now I have 5 broken aircraft. Great!

Any chance of a hotfix as this is causing so many aircraft to be completely unflyable?

45,000 feet, clear skies, over middle of the ocean, online functionality off, graphics on standard ultra DX11, drop in FPS from 70s to 14.

Both Deimos and DC/SC Designs have been most responsive but unfortunately believe it to be an Asobo problem. Their aircraft are using the new effects as per the F/A-18. The effects seem to have broken not only their own aircraft but all third party aircraft as well that use their high G effects.

Hopefully Asobo will look at this ASAP.

Same problem on my system. The Wilson cloud on the back of the F-18 causes a massive FPS drop. Problem is reproducible.

If desired, I can also private message DxDiag.txt to a developer.

apparently all of us who have this problem use AMD cpu

@SebTajtaj You could be correct.

I did a complete uninstall/reinstall today. The reinstall is currently just the mandatory install which includes the F/A-18.

Having the same issue with all the listed aircraft. Did a fresh reinstall and no effect. Running a Ryzen 5800X, EVGA 3070, and ROG strix mobo.

Any higher G manouver causes a massive loss of FPS. GPU use drops instantly to 10-20%, CPU use is also still under 30%. Only seems to affect the F-18 and since the vortex effects were added, none of the other standard aircraft affected. I also have FBW A320, Bf109, H135 and no issues with any other aircraft (although none would feature vortex effects)

Any update on this issue from Asobo? I was the one that reported it on Reddit a while back and haven’t seen anything new.

No, I tested the latest game version after world update 9, issue is still there

This has certainly NOT been fixed for me, still exactly the same massive slowdown as soon as I pull up even the slightest bit.

Oh man, that sucks. I wonder how others will fare with this update? I haven’t changed any settings and it magically seemed to work for me.