With its advanced Systems, Weapons, Electronics suite(s), the thought there is no precision/dial/type-in flying controls seems as absurd.

I have not seen such options in the F-18C (DCS version) or in any of the other military aircraft that I have flown in simulations. The only option you typically have is to fly to the desired altitude and then hit BALT or RALT, which engages the barometric or radar altimeter altitude hold function.

Not sure why they don’t have the autopilot options you mention, but a fighter aircraft is surely flown in a different way then an airliner. The climb is typically much shorter than that of an airliner, the climb rates are insane

Also often they fly in formation, with one of the planes in the lead, and the rest just follows. It is probably not desirable to fly on autopilot during a formation flying climb.

Thanks again for the tutorials. It’s starting to sink in.
Been finding Tacan channels to fly back and forth between.

Setting up flight plans and moving back and forth between waypoints. 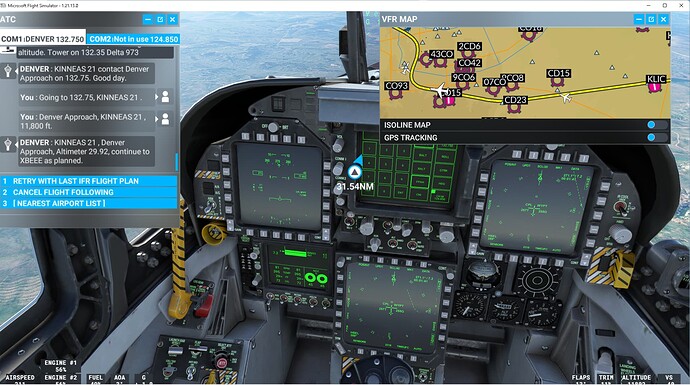 I found it on the Internet. it helped me to build routes and follow via tacan
Source: Каналы и частоты TACAN, VOR, LOCALIZER - Авиационные и компьютерные заметки

I am able to switch off autopilot with a keyboard bind. But…

Could you please school me on how to turn off all autopilot controls in the DDI?

I try clicking off the AP check box but FPAH and HDG stay on.

There is no “off” buttons via the UFCD, in the jet the A/P is turned off using the paddle button on the stick.

I had the problem of never getting any TACANs to work and I’ve seen others have the same issue following the procedure above and nothing shows up.

If you are using Navigraph data (like I am) there is an update to the AIRAC cycle to add TACAN support. Once I installed this update the TACAN started working in the F-18. Just go to your Navigraph app and update your data. Maybe this will help someone else who hasn’t been able to get TACAN working and is using Navigraph.

One of the most valuable topic so far over here! Thanks!

hello, what is the minimum and maximum range of the tacan to work in this f18?

Minimum range normally should be 0NM, but using the default nav data I’ve seen many stations outside the US have minimum ranges of around 27NM. The maximum range in the sim tends to fall around the 90NM mark in my experience.