Do you have any add-ons in your Community folder? If yes, please remove and retest before posting. done

Are you using Developer Mode or made changes in it? no

Brief description of the issue:i start flight sim and load in, sometimes my yoke is not detected and when it is it’s appearing that my center is to the left (see screenshot) 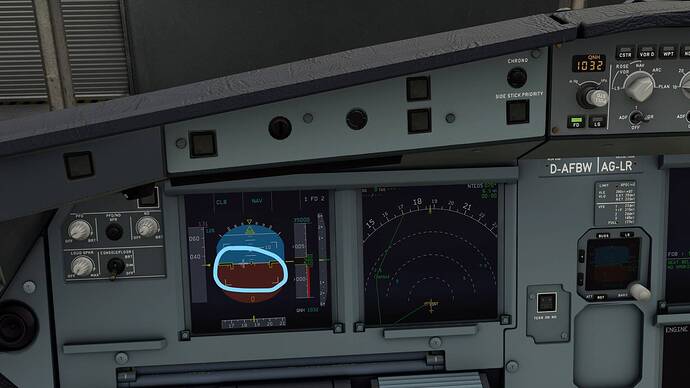 Detail steps to reproduce the issue encountered:
load into aircraft, start cold and dark A320 for example, once engines switched on the needle is to the left ad if it’s the center. i unplug usb and plug back in and it corrects its self

Did you submit this to Zendesk? If so, what is your ticket #?no

no one had this problem or is it just me?

What yoke do you have?

Does it show as off centre in windows joystick settings?

Does it show as off centre in the MSFS settings?

Does this happen all the time or just sometimes?

My yoke (saitek) does this occasionally and disconnecting and reconnecting fixes it much like yours. But it is very infrequently.

I have the logitech flight yoke, and this happens to me after I’ve restarted my pc while the yoke is still plugged into usb. Only way around it is to have it unplugged when restarting/ shutting down and only plugging it in afterwards.

A good tool for testing is DIView. A small standalone application which will show what all your control inputs are doing.

With DIView you can right click within a window of yoke axis and select “View Raw Data”
This should show if there is a mismatch with the calibration
It will also show if there are spikes coming from the hardware itself. It likely uses a potentiometer as the sensor and these wear with time/use and can start causing spikes and drift.

It’s not the calibration as when you’ve unplugged USB and reinsert it goes back to normal. I am going to submit to zendesk and see what they say as I nearly threw my yoke away for nothing, maybe a.fs2020 or windows issue really not sure yet.

I have my yoke attached to a usb hub where each port is switchable. When my yoke isn’t centred in MSFS (I check in the control options) I just switch it off and on. Easier than unplugging.

It is a known problem with the logitech flight yoke. Saitek have not fixed it and its been 3 years. It has a known centering problem I have the yoke and cannot fly
Just bought a brand new one still does not work. Can MSFS please fix since saitek are not doing anything. When it next happens you can see it uncentered in the calibration usb game controller settings.

It still seems to be the same old in January 2022. A drift problem with the Saitek Yoke specifically for the roll axis. Absolute readings in settings are center 532/1023 for roll. A calibration ( Windows settings / peripheral / properties) does not change anything.
I found an awkward, partial and non satisfactory solution with the MFS option / Control / Sensitivity function giving a negative neutral position (-3%), a dissymmetrical sensitivity (-60% left, -70%) Right, an an extended dead zone (11%).
Does anybody have anything new or any advice on the subject ?

Hi you could use magnifying glass (right upper corner) for drift problem, there was some solution for it, I don’t know how to link it. In another thread there was resetting calibration that worked and Huddison has few videos about Saitek and it’s problems

Tanks Jylppy61 to take time to answer.
I did your suggested research. Unfortunately they point to many sites I have already visited. Yet, i have not yet resorted to one of the solution: the regedit trick i am not enthused with. Many of the proposed solutions turn out to be not working for everybody.
I continue to investigate and to live with my current “senstitivity” awkward solution.
FYI the problem is complicated because it’s also mixed with the engine torque reaction which is a real thing but also probably overdone in FS2020.
Anyway thanks again.