I just wanted to share some small tricks when flying airliners under IFR and using the in-sim ATC. I see quite a lot of people who want to take their new high fidelity add-ons to next level and fly them appropriately. Some community members seem to work with the IFR/ATC for the first time. This is one way of doing that well.

First, make sure to upload your Simbrief flightplan into MSFS so you, the FMS and Air Traffic Control are all on the same page as to what the aircraft is going to do in the next few hours.

When you do though, make sure to select the proper arrival as below. This has a few quirks that not everyone seems aware of but is easily helped. 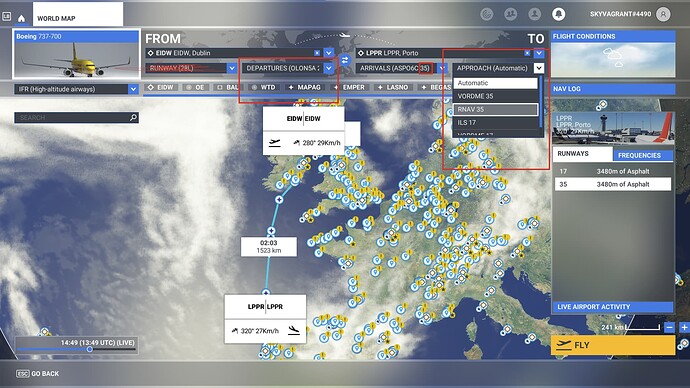 When you load the Simbrief flightplan, it will also automatically load the SID for departure and the STAR for arrival. It’s best however to also select the type of Approach you want assigned. In this case, an RNAV 35. Make sure to select that as it doesn’t do it automatically. Locking it this way will prevent ATC from assigning wrong runways upon your arrival. What you put in here, is what you get. Indeed, when the winds change it will still assign you the wrong (but now selected) runway. However in 18 months time these type of sudden windchanges happened to me only twice…

Also, note that when you start on the platform instead of on the runway, the SID automatically resets. So prior to selecting your departure gate, make sure you remember OLON5A (as in this case), select your gate, and re-select OLON5A again. This will assign the proper runway for takeoff and the speed/altitude constraints on your departure will “work’ish” in the sim. (See below)

That’s all for the pre-load on the flight, all set, ready to go.

Now when you request the IFR clearance, ATC will give you a rather randomized ‘initial climb out altitude’ that doesn’t per se reflect the SID requirements. Speed constrains however are simulated.

Let’s say we depart Dublin on the OLON5A and the FMS notes a magenta altitude restriction of 6000 feet (/FL060). The assigned initial climb-out altitude however was given for 8,000 feet. So we have 8000 feet set on the autopilot (mode control) panel. However, on VNAV climb, the aircraft levels of at 6000 feet. Total immersion killer! Bummer! …Not per se though. Restrictions on departures are often made with the ‘expect the best but plan for the worst’ type of scenarios. When it’s very busy, it’s perfectly fine to just ignore ATC with the “increase your climb to 8000 feet”. When it’s not busy, just pretend the ‘increase climb’ to be ATC telling you: “altitude restriction lifted, continue climb to 8,000 feet”. That is definitely something you’d find in real life too.

Now the more important part. Descent planning with the in-sim ATC can be a bit messy. By selecting the correct STAR and approach, ATC has locked all the speed and altitude restrictions on the STAR, so that’s pretty cool already. It becomes a bit buggy however with the Top of Descent and ATC instructing you to initiate your descent on time.

Very often, as you upload the simbrief profile, it will already be pretty close. Say 10 or 20 NM prior to your own TOD point. That’s perfectly fine though. When ATC instructs you to start your descent, you just follow along, dial the lower altitude and press ‘alt intervene’ and watch the engines spool down as the aircraft now activates the initial descent, holding a vertical speed of 1000 feet per minute. It allows the engines to spool down already, exchange some mass and energy, and by the time you hit the actual TOD on your navigation display, it will catch up (soon after) as the descent profile now chases you, instead of you chasing the profile. This is perfectly fine and found in the real world, as ATC isn’t particular interested in your unique FMS-TOD calculations but rather has the important task of separating traffic and needs you to comply without much discussion. It will assign you lower altitudes in chunks, descent to FL320, 260, 170, 8,000, 2,500 …etc. etc. etc. Everytime it does, its checking for you if there’s no conflicting traffic at that altitude. That’s why. Now you will notice that airplanes pretty much dislike descending. They love climbing! They’re build for that! But you have to massage them into it descending gently and with care (and sometimes a little force). Every time it levels off, the engines start roaring again only to find yourself soon instructed to continue descent again. This is hard work. Obviously, you don’t dial down to 2,500 when you’re at FL390 and let the VNAV take care of everything. It’s not like that in the real world and it isn’t like that in the in-sim ATC either, for good reasons.

Now lastly, the other way around. Two little ‘tricks’ with regards to descent planning. I find that it works very well, when you’re within say ~40 NM of your TOD point, to request ATC the ‘vectors to next waypoint’. It doesn’t make any particular sense, you can totally ignore the reply too, but I suspect that when you ask this from the in-sim ATC, it recalculates your position (and your height!) and will be ‘updated’ on you approaching your TOD-point, instructing you accordingly. It’s just a little trick I found, to wake up ATC and get your descent clearance properly.

However, if it hasn’t gave you the descent clearance when you’re about ~10 NM out, use another little trick. Just ask for the lower descent yourself “request altitude decrease” and it seems to be best to ask for 8,000 feet lower than your current altitude. This might just be superstition though, but I seem to find asking for the 8,000 works better than the 10,000. This isn’t very off from real world procedures either, only real world the aircraft would say “requesting initial descent”, notifying ATC of your descent planning. They’ll try to think along with you and help you out, pending traffic and weather ahead.

Now ATC will indeed clear you to a lower altitude, so let’s say from FL390 to FL310. You start your descent with the alt intervene again, you will be passing your TOD in time. And now, as you pass say flight level FL335, ATC is catching up with you anyway and now re-clears you to descent to FL230 instead of FL310. That’s all fine as you can just continue on the profile as your select FL230 instead and you take it together from there on.

So I hope this works for others too who are finally catching up with IFR flying. It’s obviously a bit of a few quirky work-arounds, but it actually works everytime and it isn’t a lot different than real world procedures. You sometimes just have to add a little make-beliefs as the jargon is missing for now. Other than that it will certainly work with you on your STAR and into your approach as long as you keep up with them. And indeed you’ll find this sometimes is hard work, both descending and slowing down and turning and getting configured all at the same time. However, that sure beats selecting 2,500 all the way down from your cruise and pre-configure like it’s a lazy sunday. Get to work.

I see quite a lot of people who want to take their new high fidelity add-ons to next level and fly them appropriately.

And if you want to add an extra layer of “immersion” skip the in-sim ATC and utilize VATSIM / PilotEdge / Pilot2ATC.

Was that really necessary when the subject of this thread is clearly ‘Flying Airliners with in-sim ATC “Workaround”’?

Totally agree with your comment, good people taking time to help others to get the best out of the SIM should be encouraged and thanked for their input. Well done for the effort @SkyVagrant4490 put into his tutorial.

@skypilotYTS go and sit on the naughty step.

Oh thanks a lot.

I don’t really mind the extra tip from Skypilot for more advanced simmers. But probably best for new community member to get a feel for procedures at their own comfortable pace. Just figuring out your first high fidelity airliner and then taking it onto VATSIM/IVAO is probably not a lot of fun for them, nor for the advanced online-simmers.

As long as every individual enjoys their flying that’s what it is all about at the end of the day.

Have a great evening.

I found myself that that requesting vectors trick to "wake up " ATC as to your whereabouts works quite well, use it a lot and if it doesnt work then the requesting your own decent is what I inevitably do a lot too.
You missed out the just ignore the “climb to 15000ft” message that ATC sometimes does on approach 12 miles out, would love it if that was fixed. I guess that bit goes without saying though, but for newbies it must be confusing.

Indeed forgot about that one Rain! Perfectly fine to ignore as they recalculate you soon thereafter.