FlyTampa KLAS - no updates on Marketplace since 5 month

I know it takes some time until the scenery gets updated in the marketplace but its now almost over 5 month this payware scenery was updated.

The current version I can download via the content manager is V1.3.2 this was released 20 Feb 2021 by the developer. 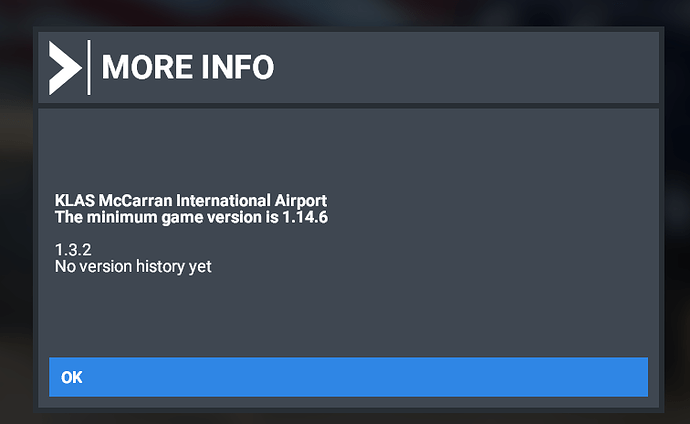 I would like to know if MS/Asobo is going to implement the updates any time soon?

Asobo definitely needs to find a way to prioritize updates to marketplace products. The fact it can take months to push after they are available everywhere else is completely unacceptable in my mind. It is unfair to developers who are keeping their end of the bargain buy updating their products to fix bugs and update compatibility after all these Sim Updates, as well as buyers that pay $10, 15$ or even more for these product and who cannot enjoy them as they were meant to.

I bought this AGAIN for $19.99 and cannot unload previous version from market place. My packages/community folder on my C: drive is empty and nothing in other community folder in my FS install drive. Any Ideas???

I maybe wrong but did KLAS come with world update 2, if you bought a third party what you need todo is delete the stock KLAS in the Marketplace.I had problems with 3rd party airports then realised the airport was included in some world updates…sorry if I have the wrong end of stick…

Edit…yep got it wrong, just read your thread

The latest version of Las Vegas (v1.5) is with Asobo/MS, and should be available in the coming days through the marketplace. Other than this pending update, I can confirm that marketplace has the most up to date version. There are minor version discrepancies because of the staggered release of Vegas (ie own webstore first, marketplace many months later etc.)

Hi DarkerKnight220 in terms of the first appearance being delayed in the Marketplace I can appreciate that given the percentage that goes to Asobo if it is sold through there.

HOWEVER, updates to it once it appears in the Marketplace should never be months delayed which is what I understood you saying in your reply.

Hi there, sorry perhaps it wasn’t too clear. The only pending update to Vegas in the marketplace is the one we performed on 01 AUG (v1.5).

Found a way to force an update when purchased through marketplace and NOT directly from FLYTAMPA. Install via the Fly Tampa installer to your Community folder, then cut then paste all “Fly Tampa Las Vegas” files to the Official\Onestore folder in same location e.g. E:\Flight Simulator 2020\community. It now shows 1.5.1 as current version. Hope this helps and I will no longer be buying addons via the ■■■■ MARKETPLACE !!!

any news when this will happen?

something is happening here …

I do not know whether will we ever get the latest update for KLAS if we bought it from MarketPlace. Very slow process of product updating by Asobo/MS Store, very frustrated! 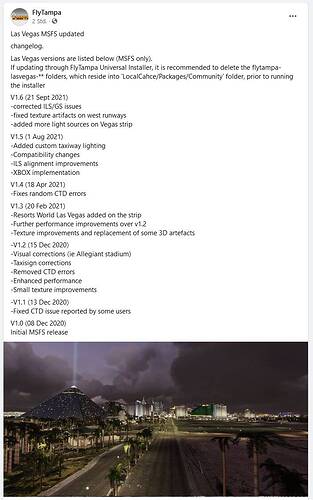 Same here. Will never buy anything again via mp. Still no update.

I think there is no way to get a serial number from flytampa that it is possible to use their installer?

Any word on why we’re still having CTD almost a year later?