If any of you own the FlyTampa Las Vegas pack (I bought from the in game marketplace) could you check the localizers on both runways 26? On mine, since the update this week the localizers a badly misaligned (a couple thousand feet north of the actual threshold locations.)

I uninstalled the addon and the problem went away, and it re-appeared upon reinstall. So I’m confident it is the addon causing the issue.

What I remain curious about however is why I don’t see anyone else mentioning this issue – This makes me wonder if it could be in conflict with another addon. So I’m hoping one of you can speak up.

The other possibility is that since this add-on is kind of a VFR mod, it is possible people who own the mod aren’t using the ILS.

Anyhow, if any of you happen to have this mod and are buzzing around KLAS today, if you wouldn’t mind shooting a 26 (L or R) and letting me know if you have any issue - I’d really appreciate.

Since the airport was released, even before the updates, glide slopes of ILS approach at both 26L & 26R were already inaccurate. I do hope FlyTampa will fix it. Anywhen I fly to KLAS, I am just using ILS Rwy 01L.

Before, it was the glideslope that was a little off. But that was not as horrid.

Now the GS seems about right, but there is no runway in front of you just terminals!

Well, if we can agree its the vendors problem, can everyone please hustle on over to flytampa’s forums ( FlyTampa - Forums ) and start raising a stink about it? They ain’t gonna fix if nobody is complaining.

Ironically, I just shot the ILS to 26L in the new Turbo Arrow III and the localiser was fine.

The glideslope, on the other hand, was miles off. It was showing full ‘fly down’ deflection when the PAPI’s where showing 2 reds & 2 whites.

If I’d followed the glideslope I’d have made an unscheduled arrival into the ground about a mile short of the runway.

Thats the problem I had prior to SU4… Glideslope landed about 1/4 mile before the runway threshold. 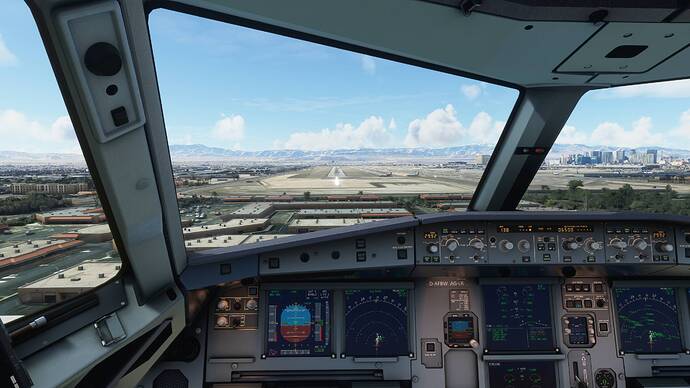 based on that file name that screen is from before SU4. That is the same issue I had before SU4, now its different.

Over on their forum there is a note now that they are looking at it.

If you’re having this problem, you should probably throw yourself into the discussion politely, the more people they know are impacted, I think the more likely they’ll be to give it some priority.

I should add that they later published a ‘fix’ but its still not right for me.

I posted on their forum showing a video of it now properly aligned to the runway but the GS does not come to the touchdown zone (similar to the screenshot above).