Follow up stream- Tour of Pyongyang in a Vertigo!

In this vid, I took a leisurely tour of the capital city in a Vertigo with a US Army livery. Don’t try that in real life boys and girls!

I managed to find the stadium where the military “might” parades are held, but not the teepee shaped hotel that took them 20 years to build. If you happen to know where it can be found, please let me know, though it’s completely possible it’s simply not there in the scenery.

So here’s the link, enjoy! Please toss me a subscription if you would be so kind, even if you don’t use it… Like YouTube, it’s all about “The algorithm” lol

Kev, it’s north of the river, the Ryugyong Hotel… 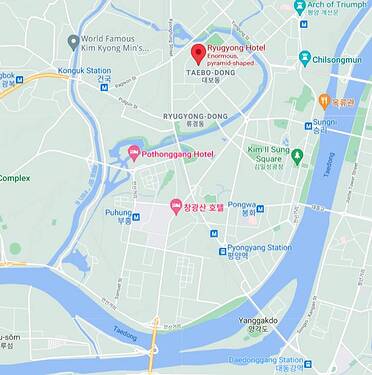 @trashmon49, was I anywhere near it during my flight?

Kev, I don’t think so, you were south. maybe by Pyongyang Station. Follow the AH1 highway going north and when you cross the Taedong sewer (I mean river), it’s 3.2 miles on that heading…
Tim

Is your sim that stuttery while you are flying in VR or is it due to livestreaming and viewing online?

@autey111 not at all. Quite the contrary, I get amazingly smooth VR performance, even at frame rates you would think would result in absolute slide shows, but they don’t. But whatever is causing the choppiness on the stream lies somewhere in between my computer, and yours. Well, any viewer, in this case I don’t mean you you, just anyone who watches the stream, myself included.

I’ve got gigabit Internet, so it’s not that, at least not on my end. It could be the streaming software, and I’ve been trying, unsuccessfully to stream to Twitch, FB, and YouTube all at the same time, so it may be dumbing the quality down to YouTube standards, which are quite low. I’m going to do another stream in a bit with it set to go only to Twitch, perhaps we’ll see if that makes a difference.

I’m thinking a flight from Sedona, AZ to Telluride in a TBM with @mixMugz’s TBM improvement project. How does that sound?

Yea I didn’t think you would be having stuttering like that. I tried twitch a couple times and I didn’t have issues with stuttering but the quality was really bad. May try again and try raising the bitrate to see if that helps. Video idea sounds good. I like watching other people’s videos since there’s a lot of places I would like to fly myself but can’t find the time.

Kev, you were probably in the area, but I flew directly over the location several times last night and the Hotel is definitely not there. Several other landmarks are either missing or poorly rendered. It would be almost impossible to miss a 105 story, 1000 foot structure that, as far as I know, is still the world’s tallest unoccupied structure…

@trashmon49, you have to remember that there is no way that N. Korea allowed airplane overflights to get pics, so whatever the software has would by definition have to come from satellites. I think there is a widespread belief that ALL the shots on Google or Bing Maps come from satellites, but that’s not at all true… Most of them actually come from airplanes flying over the terrain in question with cameras rolling and pointed straight down.

What that means as far as scenery goes is that you’ll have lower res photos to work with, and absent a human changing the data or telling the software what is what, I doubt there would be enough info in the available pics to conclude that there is a hotel, completed or otherwise, and given that we would have ZERO help from N. Korea themselves aside from a very few pictures that were probably well photoshopped, no machine data to help, either.

And all that just to say that I’m not even remotely surprised that the hotel is not there. Someone is going to have to handmake it for it to show up.

Never occurred to me to fly over that country in the first place.

Well, give a look to my other N. Korea video, which was an IFR flight from Seoul into Pyongyang, and please throw me a follow on Twitch, even if you’re just humoring me lol…

Several posts were removed from this topic.

A reminder about forum Code of Conduct, that this is a forum that caters to a variety of demographics around the world. Remember to treat each other with courtesy and respect. Keep politics out of the forum.