Is there a reliable FPS Counter for MSFS 2020? I have a 2080 ti and am running 3 2k screens running. I am interested in keeping my FPS at 30 and above and want to test my system flying over various scenery such as NYC and other scenery densities experimenting with settings to compare FPS with the load on my GPU . I tried Nvidia GeForce and they cannot seem to get it to work. I tried switching to Developer mode and instead of a simple count I got a lot of data beside a simple FPS count which takes up more screen than I need. I joined steam as I am told that have a good FPS Counter but can’t see to connect with them.

I simply use the Windows Gamebar, activated with the windows key + G. One of the section concerns performances, and shows also fps. Pin it so it remains visible over MSFS.

fraps is what i use…puts a number in the corner of your screen; nothing else.

I use MSI Afterburner.

As other options described above are all fine, i still want to reccomend you msi afterburner. It will let you setup whatever you want on screen like a fps counter, but also gpu load, temps, power etc. The same for cpu. You can all edit this yourself to only show what you need. For your case it would be an fps counter ans maybe gpu load.

It’s also a great tool for overclocking and you can set up your own gpu fan curves for better cooling or more silence.

I tried the Game Bar but it did not seem to change FPS as I flew over differing scenery. Does MSI change as I fly over different terrain?

Yea I use GeForce experience, I believe the key is alt+z but I could be wrong. From there, go to performance. To toggle on/off, I believe it is alt+r. Again, could be wrong about the keybinds, thats the way I have it setup though.

In the past I have used NVIDIA’s FrameView but it may be out-of-date. I used it because the on-screen display seemed to be very accurate, it displays AVG FPS, 90%, 95%, and 99% FPS, it didn’t use any overhead, and it provided a LOT of information. It has a display mode like other FPS counters but it also has a report feature that generates a summary worksheet and a detail worksheet that is amazing. Report collection can be customized to run for a short time period to collect a performance snapshot.

If your a steam monkey, theres one built in there under think its general options. Works fine here, syncs with the ingame one so I know its right…

If you have the Steam installation of MSFS, there is a nice, low-impact FPS counter. In the Steam application, go to Settings/In-Game, and there is a box you can check for In-Game FPS counter, and options for where to put it and visibility.

Very simple, and can’t imagine that it has any performance impact whatsoever.

What do you mean by ‘change’? An fps counter is constantly showing the current fps… So if the fps doesn’t change at different scenery then it means the fps is still the same? Or there’s something wrong with game bar. Or your fps are locked…

But once again. Msi afterburner is the best tool for al gpu related stuff. So i recommend you to just download it and see for yourself👍

I use Riva tuner, only shows FPS and you can make that as big or small and in any color you want. It’s just as accurate as the development FPS.

I use the Steam frame counter. It’s small and unobtrusive in the upper corner of the screen. And it works perfectly. But the Steam counter will only work if you have the Steam edition of MSFS.

OP, this is the easiest and you can also use it to tweak your graphics. Don’t give it permission to “optimise”, as it overrides your settings in the sim.

Unlike others, I couldn’t get Gamebar to work and I’ve uninstalled it; for me, it was more trouble than it was worth. YMMV, of course.

In the past I have used NVIDIA’s FrameView but it may be out-of-date.

Unlike others, I couldn’t get Gamebar to work and I’ve uninstalled it; for me, it was more trouble than it was worth. YMMV, of course.

To have a fully functional Windows Gamebar, with FPS counter, I followed this guide:

Windows 10 has a built-in FPS counter hidden in its little-known Xbox Game Bar. Despite its name, the Xbox Game Bar is a powerful full-screen overlay you can use in PC games. Here’s how to show your frames per second (FPS) in games.

Now it works perfectly (under Windows 10).

Iif you have an Nvidia card, use the GeForce Experience overlay and set the HUD to show frames. You can pick the corner and it’s the least intrusive option I’ve seen. I leave it on full time. The GFX screenshooter omits the frame count, but if you want to include it, just use the Game Bar’s shooter. Here’s a shot a took a few days ago to illustrate the frames I’m getting on my rather modest laptop… 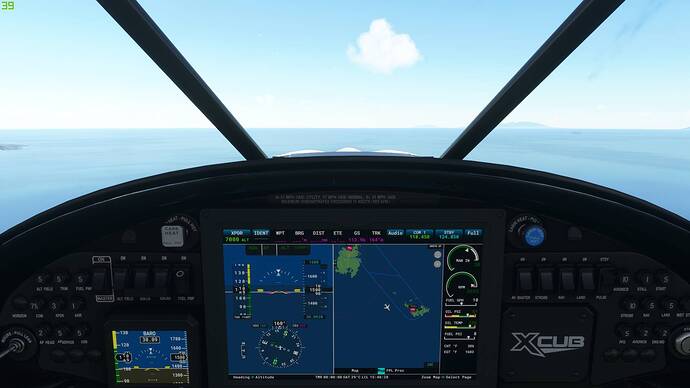 Thank you for all the suggestions. Got it working. Just don’'t go to the screen in GeForce which mentions optimization. Used the first GeForce screen that appeared, clicked on the 3 green circles, set HUD according to my selection of placement for the FPS counter and launched. FPS Counter appears.