Hi,
Personally I think my FPS is currently high enough and I am not experiencing stutters, so I have been watching some video’s about graphics performance tuning to see if I can improve my graphics quality, without hitting performance too much.

I have enabled developer mode and the FPS counter and it generally shows the following values: 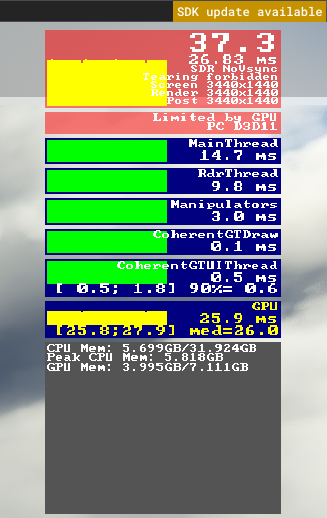 I’ve read that “limited by GPU” is better than to be limited by CPU, so in that sense I think I’m ok. However, the GPU values are shown in a red square and the graph itself is yellow instead of green. What does this mean? It has probably already been explained somewhere, but haven’t found it, yet.
Should I aim for all green?

Btw, not sure if this has any effect, but I have limited my FPS in the NVidia control pannel to 45 FPS.
My card is the NVIDIA GeForce RTX 3060 Ti.

Green means everything is running at a pace of 60+ FPS (<16.67ms). Yellow and red means slower than that.

The colors and FPS boundaries might be somewhat dependent on the Vsync and FPS limit settings in the UI, and whether or not you’re playing in VR.

I’m able to replicate your red and yellow box/graph at the top by changing my Vsync and FPS limit settings in the sim. It might be a bug, because I see no reason for the box to be red in such a smooth performance state (in fact, I don’t even have to leave the menus). For example, depending on the above settings, I can get the very top box to appear green or red @ 30 fps while the graph inside appears yellow (yellow graph is correct @ 30 fps).

What program is that? I use the counter in the Xbox app on my PC. That’s the one I want.

You first have to active “Developer mode” from General options. After that a menu bar is enabled on top. If you look in the “Options” menu you will see a menu entry “Display FPS”. When you enable this, the FPS counter will appear.

I’ve just disabled the FPS limit and then when I’m still in the menu’s, the bars show all green (and the counter reaches 100 FPS), but as soon as I start flying the FPS drops back to around 30 fps again and the GPU box turns red with a yellow graph.
Could it be that (in my case) the main thread renders a frame in 14ms, so it could theoretically achieve 70 FPS, but the GPU can only reach 30 FPS, so that’s why the box turns red?

Can anyone give many ideas why my 2k monitor with a Nvidia 3080 renders DOWN??? 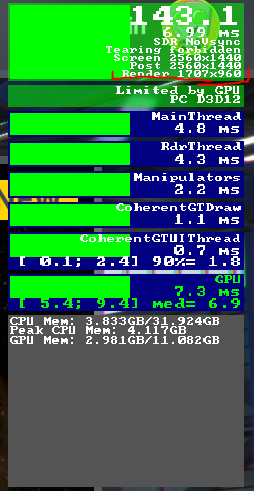 I believe that the yellow box inside the red box represents the item which is the current limiting factor. In your case its the GPU so it is yellow like the GPU stats down further. In my case, its like yours but the top box is green with yellow GPU limiting factor. I have no idea why yours is red and mine is green.

My FPS pretty much stays pegged at a buttery smooth 30 except for on/very close to the ground. I’ve got a RX6800 card paired with a Ryzen 5900x and 32gig mem. I’m running with vsync on at 30fps in the sim and my monitor refresh rate at 60Hz.

Sorry - didn’t see the “3 months later” with my previous post. With regards to why your 2k monitor with a Nvidia 3080 renders down - check your rendering setting in general options.

an anyone give many ideas why my 2k monitor with a Nvidia 3080 renders DOWN???

Yes I have DLSS enabled - But with that enabled I don’t get the RENDER SCALING OPTION in the Graphics menu? What is AI that you mention to upscale with DLSS?

Yes I have DLSS enabled - But with that enabled I don’t get the RENDER SCALING OPTION in the Graphics menu?

You won’t be able to adjust render scaling if DLSS is enabled, as DLSS will force you to render below the screen resolution. This is how DLSS improves performance. AI = artificial intelligence.

I need your help. I dont undesrand why in everybodys FPS counters you have fat bars and I have very tiny ones

Look, here I show what I mean. Veeeeery tiny bars and I dont know what it means… someone can tell me what does it meand those tiny bars??

I need your help. I dont undesrand why in everybodys FPS counters you have fat bars and I have very tiny ones

Look, here I show what I mean. Veeeeery tiny bars and I dont know what it means… someone can tell me what does it meand those tiny bars??

It means you have a kick-a** system that can slay the MSFS dragon! The lower the better!

Oh! thank you for your answer

to be honest I dont think I have a kick **s system, Ryzen 5 5600x, RX 6650TX and 16 gb of ram, its not bad but I have seen a lot of people here having much better system than mine and having fat green bars in the FPS counter.

I was thinking that maybe I had to optimize something in the configuration.