I wrote a little app for the Steam users to switch in seconds from Beta to Release channel and vice versa.

BUT:
To use this app you need to

Thanks Ensi! Will use it for the next beta

Nothing to thank for!

Wenn der Kopp nicht weiss was der Arsch macht!
Sorry for the german phrases, but have a look here and the following 4 posts:

Leaving the Beta in Steam-Version is impossible, CTD Install, Performance, and Graphics

Thanks. Please keep any follow-up discussions of this Third Party product in the FS-2020 Release - Beta Switcher released . Let’s not intermix the two here.

What I really like here is that kind of professionalism …

Edit:
These were the original postings: 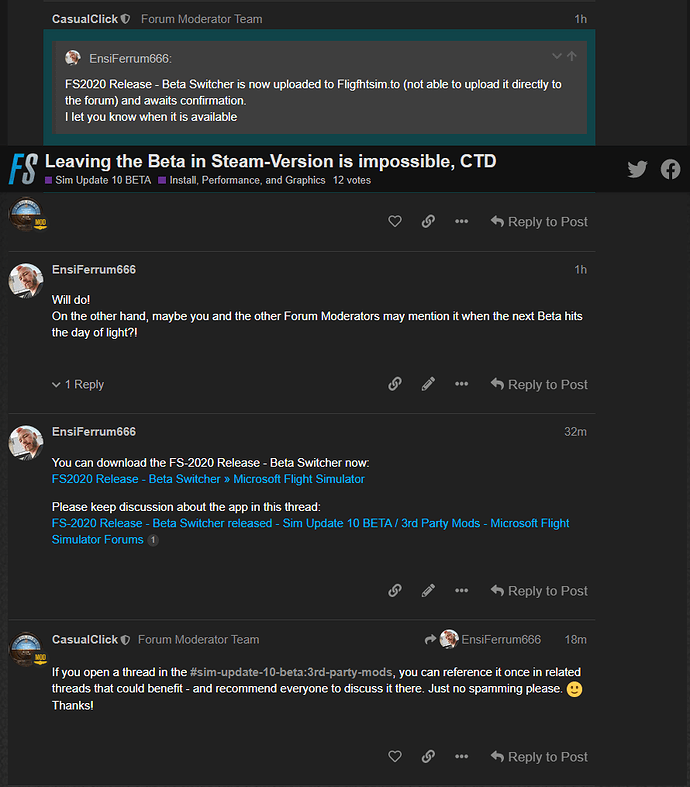 I have a question.

I’m on SU10 Beta, and already tried the MS method to revert with obvious failure, so reverted back to SU10 Beta again successfully.

I have a disk image backup of my SU9 Steam install folder and the SU9 Steam Library folder, both of which were on my game SSD. However, the C:\Users[USER_NAME]\AppData\Roaming\Microsoft Flight Simulator folder was on my C drive and I now only have access to the SU10 Beta version of that folder.

Q is can I reconstruct SU9 install with the SU10 version of C:\Users[USER_NAME]\AppData\Roaming\Microsoft Flight Simulator , or are there SU9 critical files that are needed in there, which I now don’t have? (& I have SU9 versions of the other two folders).

Thanks, but I don’t have the space to spare for 2 full installations.
I’ll was just wondering if I restored from the full (SU9) + incremental (SU10) backups, it would work.

I guess I’ll test, I can just restore the drive/directory for SU10 if not.

You don’t need the user folders to revert back to SU9 from SU10 Beta, all you need is the MSFS Steam content folder and the MSFS Steam install folder.

In this folder is your logbook.
You might end up with 0 hours.

Doesn’t seem to be, all good. Maybe that’s only for local Steam saves?
I have Steam cloud saves on, and the only thing in that local Steam folder is screenshots.

So it’s more accurate than the ingame logbook (aka local/cloud logbook), which doesn’t log when you’re in dev mode anyway.