Hi @TheStoepsel2001 Just downloaded and tested… seems to work well, but one thing - is there any way to have a button that minimizes the two massive controls for the quality and refresh rate from the bottom of the panel?

They completely block the area in the window I am bringing in (Youtube chat window) where I would otherwise be able to type text. Also won’t allow me to read the first few messages since they are at the bottom of the panel and are blocked - 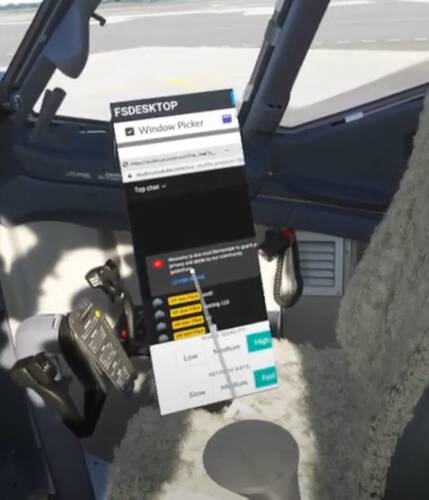 if that huge portion of the panel can be removed/minimized down to nothing, then this would meet my needs very much.

Using FSdesktop, too. Finally, I can take FS-FlightControl into my VR cockpit!

I agree, those control areas (perhaps including the Picker Bar on top) should be as small as possible. Space in the cockpit is always limited.

Sorry for late reply. I was talking about OVR toolkit on Steam VR. My VR hardware is Oculus. OVR toolkit could be better on WMR, I don’t know. These days i use Oculus desktop on Oculus Dash, which caused me crashing my plane sometime. Really looking forward to something that can bring the desktop into VR cockpit.

I have downloaded the software for the trial period.

I am just starting to use a G2 headset and want to bring LittleNavMap into the cockpit as I use its’ moving map when flying online with a friend.

FSKneeboard does indeed bring LNM into the cockpit but (as mentioned by others) the borders at top and bottom are far too big - if I drag the window to make it larger, the borders just get bigger!

I also find that I am unable to perform any actions within the LNM window with my mouse, it is just a viewer - if I cannot interact with the window then I would have to remove the headset to use LNM which defeats the object of the exercise. Do you anticipate hopefully being able to provide that ability in the future?

How is the performance?

If it can work like move vr works in Xplane, it would be possible to open MS Paint into fs2020 and write the ATC clerances in a graphic tablet like Wacom, without removung the headset…

Canvas is not optimal fie who is using a graphicbtab because tge pen acts like a mouse , and can interact with the cockpit.

Openkneeboard allows to use a white board and it works perfectly with the Wacom tabs, and the oen does not interact with the cockpit as a mouse…
The only drawback is that it is an external program (built initially for DCS) and the window is not visible within the FS taskbar… to adapt the size, position of the kneeboard, it is nkt configurable within the sim itself… so it takes a bit of time to have it where you want, but the position is then locked and it works perfectly