How can you check what version of the G1000 NXi you have?

Hello,
I moved this to Third Party Addon Discussion > Aircraft (even though Working Title is first party).

It should be in the content manager. Press the info button on the right of the entry.

The manifest.json carries that info if you’re on a PC.

How can you move the Navigation map of the G1000?

Forget it . I just need a new mouse with more buttons

The same knob you use to adjust the zoom is also a button and basic joystick. Press it and you should see a mouse cursor. Move the stick to move the cursor - move it far enough and the map will move. I’m not sure how to re-center, since I’ve never really needed the function.

Thanks. One thing though is, why the flight path in the Navigation panel of the G1000NXi is different than the flight path shown in the VFR map?. see photo. The flight plan was made usung the arrival and departure points in the MSFS world map. it seems that VFR map and Navigation map follow two different routes on arrival.

P.S. I found out that in other airports works fine. The one shown is the Thessaloniki one " Makedonia airport" 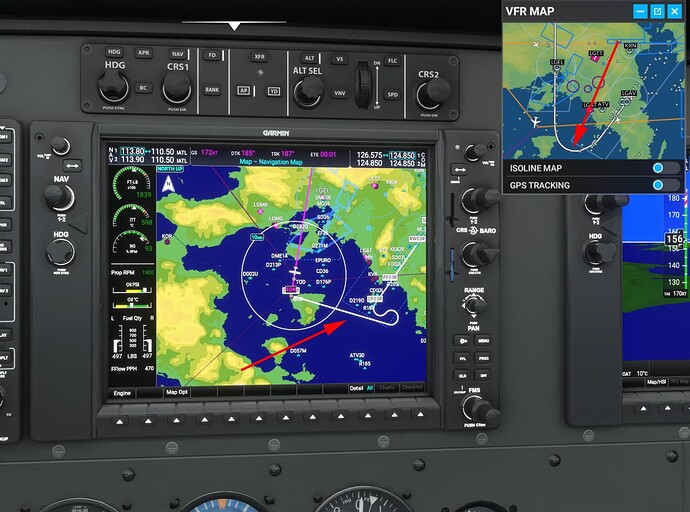 You’d have to ask the WT dev’s about that one.

That’s because the NXI uses an ARINC compliant flight planning engine. The same one that will eventually replace the MSFS World Map which cannot recreate certain Procedure Legs today. So there will always be a mismatch between them until that time.

It will happen at some point when WT completes the first tranche of converting all the Garmins (maybe after G3X, but only WT can say for sure).

I know that there was a little diddy by Working Title not to “tell us to add such & such functionality” b/c they know what they are missing, so I don’t want to be making that mistake (or make them mad) if my request comes across that way… it would be nice though to have a better weight & balance page for total pounds of fuel left, and a place for what cargo you have, etc. (if the nxi even does that, not sure) so that we can reference charts we have for specific airplanes to know what our reference speed(s) should be for a given approach