Heading indicator gets out of sink with Air Manager, pms50 GTN 750, and high sim rate

Developer Mode is enabled, but not being used for anything.

Provide Screenshot(s)/video(s) of the issue encountered:
Notice here how the G5s are pointing north but the compass (and cockpit DG not shown) are pointing to about 040 deg (magenta line). 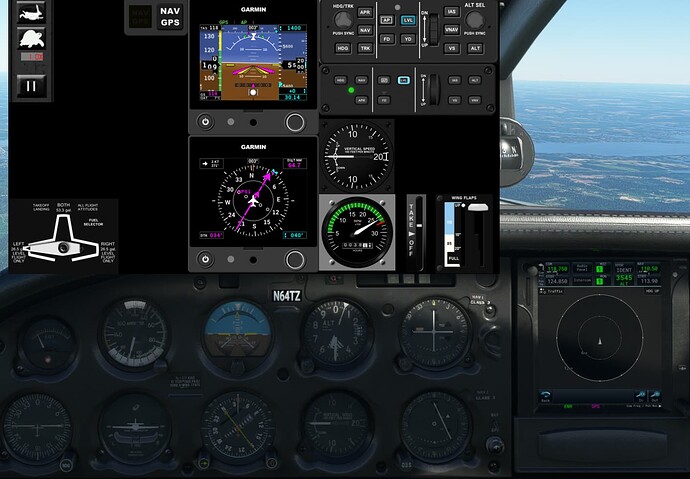 When the following combination is in effect:

The following problem occurs:
The Air Manager eventually (quickly!) gets back an incorrect HEADING INDICATOR value from the sim and it remains out of sync. I have verified with both companies that they only read that variable and never attempt to set it. This leads me to believe the bug is in FS2020, perhaps due to the extra CPU load on the simulator from the two 3rd party tools and the high sim rate.

I have an RTX 3090 and a high-powered Intel Xeon CPU. Other peripherals shouldn’t matter, but I have a Honeycomb Alpha and Bravo, and Logitech rudder pedals.

Verified with latest at this date. Been using Air Manager for about 4 days.

As your post is about issues with 3rd party content, I’ve moved your topic to the #third-party-addon-discussion:tools-utilities category which is more appropriate

It isn’t up to Asobo to fix a third party’s issues.
In this case there are several involved.

That’s certainly why it won’t get fixed, but the two companies are pretty sure it’s not their bug. FS2020 controls the current heading indicator value, which is correct in the cockpit, but being exported incorrectly to 3rd-party add-in tools. We actually verified that the raw value coming out of the SDK was wrong. Those two tools do NOT set navigation-type variables like heading. So this points to an FS2020 bug, but I suspect it will be assigned low-priority and never get fixed unless a fix comes out of some other more global bug seen by more customers.

So, have you entered a Zendesk support ticket on the issue. (from Support - top of forum page - then Submit a Request)
FYI, Asobo does not monitor the forum for issues, so a post in here probably won’t get it fixed.

Did not realize that. Will do. Thanks.

FYI, Asobo does not monitor the forum for issues, so a post in here probably won’t get it fixed.

Funny because it’s come from the horses mouth several times that they monitor the forums.

The basic DG has a sync knob for exactly this purpose. I assume you are aware of gyro drift. The G5 shouldn’t do it because its simulating an AHRS driven heading. I can’t confirm because I can’t look at the G5 code but it may just be using the standard heading data that will have the drift applied and without a sync adjustment like a standard DG it will therefore be out over time. It has nothing to do with the pms or using accelerated time and its probably not the sim either.

In that case, the Keyboard D key should re-sync the headings ,

They do scan them, they want to know what’s going on, but not on a regular scheduled basis, and not to fix individual issues.
Feel free to check with any of the moderators for confirmation, and when you do, please post the answer!

Just wanted to report back that this heading bug does not happen when using the latest WT G1000 FXi beta rather than the default G1000.

Also, there had been a workaround to slow the sim down to 1x before turns. And there was also the option of restarting Air Manager to get a new session with the sim.

Like I posted earlier I don’t believe this is a sim bug but gyro drift. Did you try correcting the drift when it becomes noticeable. If you confirm this all that’s needed is to feed this information back to SI to update the G5 to include drfit compensation.

You are right. I have since confirmed that. They are allowing the G5 to drift rather than looking at magnetic heading. When I put an analog DG on Air Manager and use the drift adjustment, it adjusts the G5 too, so that is a workaround for now. The G5 obviously should not require it. I am not sure which variable is appropriate to get the magnetic heading that isn’t susceptible to compass errors, but they will figure it out. Thanks.